Excavation of treasure in Pulau Nangka to continue

MALACCA: Interest in the ancient treasure supposed to be on Pulau Nangka continues despite the failure of the first excavation effort.

The state government is to invite bids for a contract to bring out the treasure after the firm it commissioned failed to do so by the Aug 1 deadline set.

Chief Minister Datuk Seri Idris Haron is convinced that the treasure was there in a cave on the island and it was worth billions of ringgit.

“I have seen the pictorial evidence of the treasure inside several chambers of the cave and am positive that all the relics are still intact,” he said.

He added that pictures provided to him by relic salvaging companies showed that treasure was stored in the cave. He did not allow the photographs to be reproduced for fear of copyright infringement.

Idris also referred to the pictures that appeared in a tabloid in June featuring two divers, a man and a woman, believed to be French, holding tortoise-shaped gold-plated bars and several other relics at an underground waterway leading to the cave.

“That is why the state government wants excavation to continue and will invite bids,” he said.

“Details will be disclosed later.”

Idris said the new firm appointed for the work would be briefed on the do’s and don’ts.

An aide of the Chief Minister said that foreign firms too could bid for the excavation work.

He also said that the Chief Minister wanted to be “honestly and accurately” kept informed of the progress of work, and ensure that there was no looting.

The relics that Smart Partnership International found in the cave on April 30 were two medallions, one with inscriptions in Arabic or Jawi, and the other in Sanskrit or probably Tamil Pallavi, which the Malacca Museum Corporation said that it could date back to the Majapahit Empire, beginning in the 13th century.

This institute is a national treasure 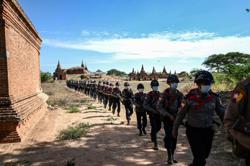