KUALA LUMPUR: Two large sinkholes that appeared at the Jalan Pudu and Jalan Hang Tuah intersections in the city here have sparked off the creative juices of Malaysians, creating a tide of memes that are being spread on the Internet.

The memes, satirical viewpoints on photographs taken of the incident, are being circulated on social networking sites such as Twitter, Facebook as well as web-based messaging applications such as WhatsApp.

Meme of authorities fixing the road with duct tape

One of the most-circulated memes pins the cause of the collapse on fictional Japanese monster Godzilla.

Other fictional characters depicted in the various memes are King Kong, the Transformers, Ultraman and Loki.

Some memes also make fun of authorities, who are pictured using duct tape to "repair" cracks in the road. 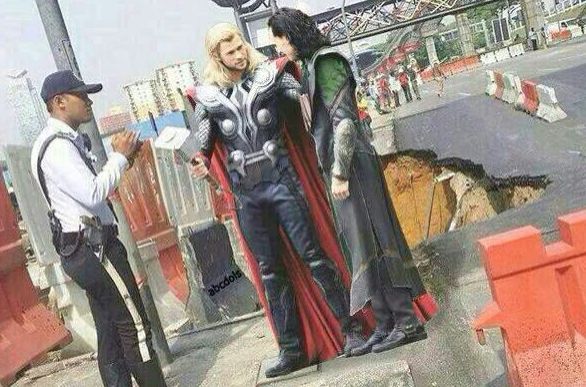 Meme including Thor and Loki

Thirty personnel from the Department, as well as two teams comprising of 20 DBKL rescue personnel, police, and Prasarana officers are on site to assist with the situation.