15 charged with barging into state assembly

GEORGE TOWN: Fifteen men claimed trial in a magistrate’s court to a charge of trespassing into the state legislative assembly building last month.

They were jointly charged – with one person still at large – with trespassing into the building in Light Street with the intention of inciting fear in state assembly secretary M. Maheswari at 1.30pm on May 21.

The offence under Section 448 of the Penal Code for house trespass and read with Section 34 carries a jail term of up to three years, or a maximum fine of RM5,000, or both upon conviction.

The accused arrived at the courtroom at about 10.15am yesterday. 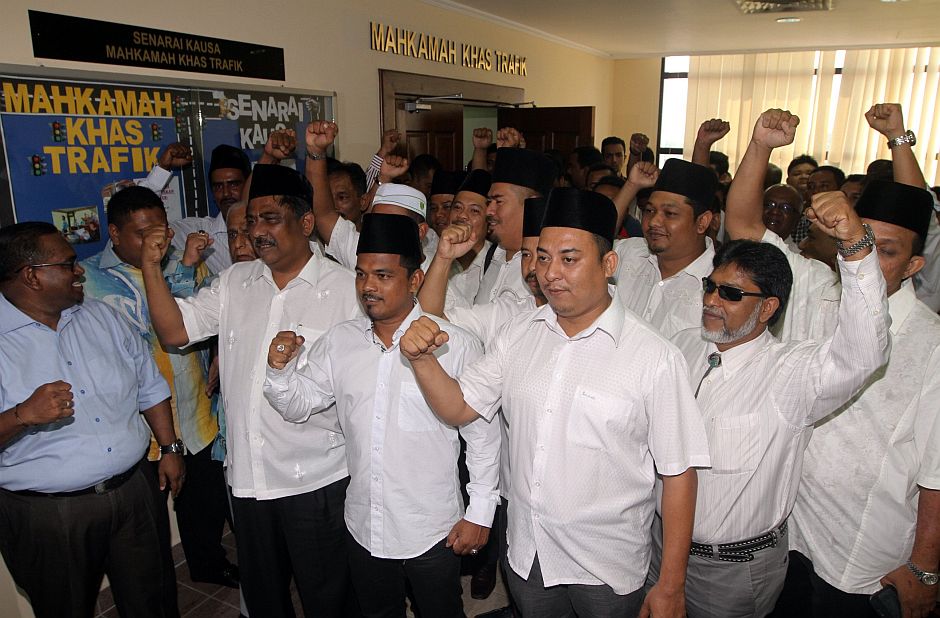 Jointly charged: The accused leaving the magistrate’s court in George Town after they have been charged for trespassing into the Penang State Legislative Assembly building in Light Street.

Their supporters packed the gallery, with many standing due to limited seats, and took photos with their handphones and tablet devices before the start of the proceedings.

At about 10.45am, a court policeman asked all those not connected with the case to leave the courtroom but he was ignored.

When the policeman instructed pressmen to vacate the courtroom, one journalist said: “We are here to do our duty. The supporters standing should leave the room.”

Many other pressmen expressed the same sentiment.

This led to a short exchange of words with one of the supporters shouting at a reporter for a news portal.

“They have cooperated with the authorities by being present in court without the need for warrants,” he said.

Abu Bakar also urged the court not to impound their passports.

“Some of them are businessmen who need their passport to travel in and out of the country. Some might also be performing the umrah during the fasting month,” he added.

Magistrate Nurul Rasyidah Mohd Akit set bail at RM2,000 in one surety for each of the accused.

She also fixed July 22 for mention pending submission of documents.

Lawyer Wan Nazri Othman is also acting as counsel for the accused while DPP Siti Fatimah Talib and DPP Datuk Razali Che Ani are the prosecutors.

Meanwhile, Penang Press Club chairman Chew Hock Pheng urged the police to be fair to journalists who have to be in court to report the case.