PETALING JAYA: Celebrity chef Datuk Chef Wan landed himself at the centre of controversy Friday when he posted a picture on his Instagram account, apparently making light of the search for the missing Malaysia Airlines flight MH370.

The 56-year-old was pictured holding a door-like object, which he linked with search efforts in the southern Indian Ocean. 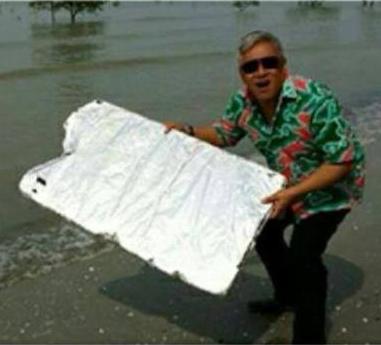 The accompanying caption read; "Two objects in Perth, and this I thought was one of them, the MAS plane's door. However, after scrutinising it, it turned out to be the old toilet door from Cik Kiah's house on Morib Beach. Frustrated."

The photo has since been deleted after receiving many negative comments on his Instagram page.

He later posted another comment, explaining that he was merely playing a joke.

"When I was at the beach, I told my crew we should play a joke and see the reactions of Malaysians who like to complain and tease people, he said, adding that the media and blogs would sensationalise the issue."

"My driver told me not to do so because people would get angry, even though we are well aware it is a joke. But even the crew found it amusing," Chef Wan added.

"I am sure many of us behind closed doors would have joked about this issue over in the last few days, except I put it on Instagram to see the public's reaction!" he said.

"It turned out that I was right about Malaysians looking for ways to demean someone, even though it was done as a joke. However, I accept the consequences of my actions as I did it on purpose and was successful.

"Now, let us judge how the bloggers and press will manipulate this issue as you know what I really meant.

"At the end of the day, the wise man will have the last laugh watching all this drama unfold!" he commented.

Last February, Chef Wan was embroiled in another controversy when he described a meal served on board a Malaysia Airlines flight as "nasi lemak telanjang" (nude nasi lemak).

The search for MH370 is now in its 14th day, with search efforts currently concentrated in the southern Indian Ocean, where satellite imagery pictured two objects that could potentially be debris from the aircraft Thursday.

Search efforts have so far failed to locate the debris concerned.