PETALING JAYA: With the focus back on the crew and passengers of missing Flight MH370 after fears were raised of a hijacking, police are looking further into the background of flight captain Zaharie Ahmad Shah.

Intelligence sources said the investigations would include political and religions leanings of the two pilots, and the travel pattern of all on board. The probe would also include their hobbies and behaviour with their friends.

The Mail on Sunday  has learned that Zaharie was an ‘obsessive’ supporter of Malaysia’s opposition leader Datuk Seri Anwar Ibrahim.

And hours before the doomed flight left Kuala Lumpur it is understood 53-year-old Zaharie attended a controversial trial in which Ibrahim was jailed for five years, it said.

Police sources confirmed to the daily that Zaharie was a vocal political activist and fear that the court decision left him profoundly upset.

It was against this background that, seven hours later, he took control of a Boeing 777-200 bound for Beijing and carrying 238 passengers and crew.

Police on Saturday searched Zaharie's house in the upmarket Kuala Lumpur suburb of Shah Alam, where he had installed a home-made flight simulator. 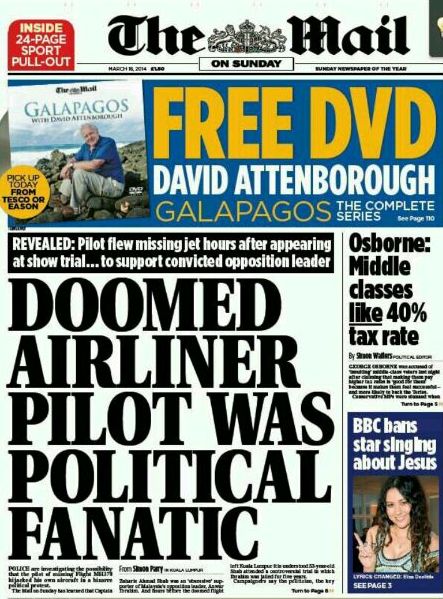 But this newspaper can reveal that investigators had already spent much of last week examining two laptops removed from Zaharie’s home. One is believed to contain data from the simulator.

Confirming rising fears, Malaysia’s prime minister announced that MH370 was deliberately steered off course after its communication system was switched off.
He said it headed west over the Malaysian seaboard and could have flown for another seven hours on its fuel reserves.

Military radar showed the jet climbed to 45,000ft – above its service limit – which could have been a deliberate attempt to knock out the passengers and crew.

The raids on Zaharie’s home appeared stage-managed as a display of intent after the Prime Minister said the focus of the investigation was now on ‘crew and passengers’ as a result of the latest leads.

But investigators have told the Daily Mail on Sunday inquiries into the background of the pilot actually began days earlier.


Malaysian police, helped by FBI agents from the US, are looking into the political and religious backgrounds of both Zaharie and his co-pilot. Zaharie’s home was sealed off as police spent an hour inside.

However, a senior investigation source said two laptops were taken from the property in low-key visits by police early last week despite a series of denials by officials that his home had been searched or raided.

One laptop taken away is thought to contain data from the flight simulator while a second contained little information.

Zaharie’s personal laptop was not found, and is thought to have been with him in the cockpit of the plane, the source said.

Zaharie’s co-workers have told investigators the veteran pilot was a social activist who was vocal and fervent in his support of Anwar.


"Colleagues made it clear to us that he was someone who held strong political beliefs and was strident in his support for Anwar Ibrahim,’ another investigation source said.

"We were told by one colleague he was obsessed with politics."

In their interviews, colleagues said Zaharie told them he planned to attend the court case involving Anwar on March 7, just hours before the Beijing flight, but investigators had not yet been able to confirm if he was among the crowd of Anwar supporters at court.

Zaharie is believed to be separated or divorced from his wife although they share the same house, close to Kuala Lumpur’s international airport.

They have three children, but no family members were at home: only the maid has remained there.

In the days after Flight MH370 disappeared, Zaharie was affectionately described as a good neighbour and an eccentric ‘geek’ who had a flight simulator at home simply because he loved his work so much.

Malaysian officials initially appeared keen not to direct any suspicion towards Zaharie or his co-pilot, 27-year-old Fariq Abdul Hamid, who was last week revealed to have invited two women passengers into the cockpit and smoked on an earlier flight to Phuket.

But evidence of the way the plane’s transponder and communication systems were disabled and the way the plane was expertly flown over the Indian Ocean apparently using navigational waypoints meant only a skilled aviator could have been at the controls.

Investigators were also baffled by why, if hijackers took over the plane, there was no Mayday call or signal from the two pilots to say the cockpit had been breached.

At Saturdays’s press conference, the suspicion over the pilot’s involvement mounted as prime minister Najib said that investigators had found ‘deliberate action’ on board the plane resulted in it changing course and losing contact with ground crews.

As a result of the new information, Malaysian authorities had ‘refocused their investigation on crew and passengers aboard’, he said.

Police sealed off the area surrounding Zaharie’s home and searched the house shortly after the press conference.

The revelations about Zaharie’s political affiliations are highly sensitive in a country where political dirty tricks are widespread.

One of the investigation sources said: "We are looking into the theory that Zaharie’s political beliefs may be a factor. There are huge sensitivities surrounding this but we cannot afford not to pursue any angle brought to our attention."

Separately, a police source told the Mail on Sunday: "I can confirm our investigations include the political and religious leanings of both pilots."

Zaharie joined Malaysia  Airlines in 1981. He became a captain about 10 years later and has clocked up 18,360 hours of flying experience.