MANGLED HORROR...Two brothers, aged 16 and 22, perished after the car they were travelling in collided with an excursion bus along the Kuantan bypass near the Kuantan Court Complex on Wednesday. The eldest sibling, aged 25, and a 21-year-old sister, survived the horrific crash but sustained serious injuries. The car they were in had earlier hit the back of another car before being rammed by the bus, which was trailing behind. Kuantan OCPD Asst Comm Mohd Jasmani Yusoff said the case was being investigated under Section 41 (1) of the Road Transport Act 1987 for reckless driving resulting in death. Firemen had to extricate the remains of the siblings from the badly mangled wreckage. - By SIMON KHOO

ONLINE EXCLUSIVE: PETALING JAYA: Dangerous road conditions and unsafe vehicles are among the reasons given by netizens for Malaysia's reportedly high road fatality rate, but the biggest contributor to death on the roads is the bad attitude of Malaysians drivers.

In reply to The Star Online''s query on road safety, Facebook users came out in droves to castigate Malaysian drivers for their irresponsible behaviour behind the wheel.

Among common deadly driving sins were changing lanes without signalling, using mobile devices while driving, swerving dangerously in and out of traffic, and speeding.

“Accidents are caused by drivers’ attitude and nothing else! If u can't multitask, don't! I spent half my life on trunk roads and the amount of ignorant reckless drivers there are is unbelievable! Lorry, cars, bikes even bicycles can cause accidents because the riders/drivers come into people's lane, overtake without seeing, and turn without signalling,” said a frustrated Annierita Thinakaran. 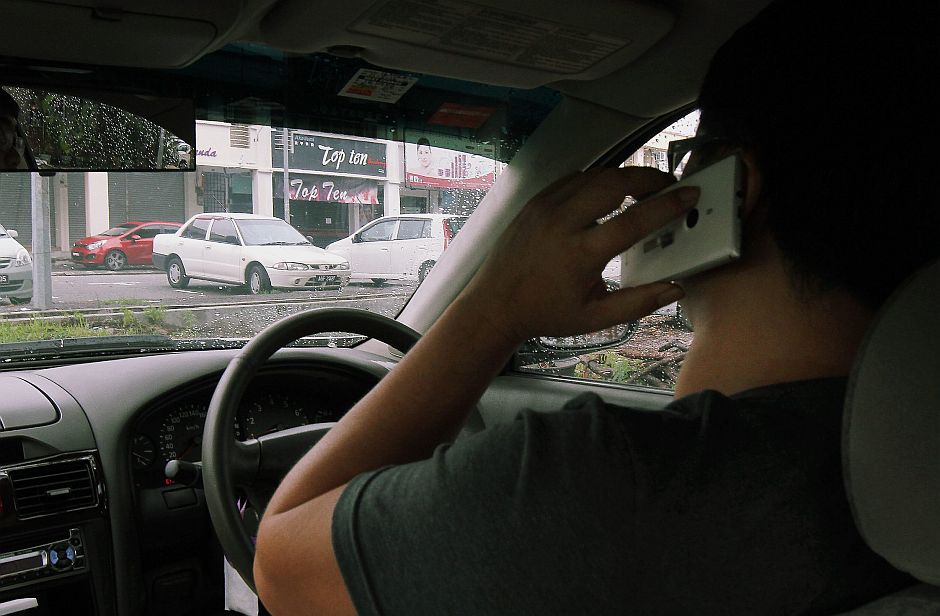 Most people opined that talking on the mobile phone without hands free kit are dangerous while driving.

“We lack courtesy on the road. Many drive as though the roads belong to them. We also like to horn for no apparent reason,” added Jeffrey Cheng.

Rokiah H. Ibrahim said that while Malaysia was relatively safe, Malaysians were not safe drivers.

Drivers and passengers not taking heed of precautionary safety measures were also at fault for road fatalities, explained Robert Blake.

“Cause of accidents is one thing - survivability in them is another. If every child were strapped in rather than climbing around the vehicle, his/her chances of survival would be greatly magnified. I just cannot understand parents who do not strap their infants in!” he said.

A few users also pointed to improper handling of cars, and cars that don’t live up to standard safety requirements as possibly have an impact on road fatalities. Hidden danger: Roads riddled with potholes and uneven surfaces can make be dangerous to unsuspecting motorists.

“The roads are still ok but the car might be a problem,” suggested Steven Soon.

“See what type of car is used and what the speed should be like. Sometimes overestimating the ability of a vehicle can cause brakes to fail, major damage & death,” said Jaann Khan.

Another pre-emptive step that can be taken is to make sure roads are always maintained and in good condition.

“I am a safe and seasoned driver, but on a road with potholes where I have to keep avoiding left-right-centre, it makes me reckless too,” added Anthony Chew.

“Look at the way they barricade the construction sites. Take the MRT construction site in Bangsar as an example. The barriers are placed so poorly that you don't really have a full 'lane' to drive on. Some of the concrete blocks are sitting on almost 10% of a 'lane' and drivers have to swerve onto the next lane just to avoid crashing into it,” explained Stephanie.

“This then causes disturbance to drivers on the other lane. The way they paint the 'lanes' on the road is ridiculous and confusing. You can't even tell which is the right lane to be on!” she said.

In stemming the issue from its root, some users have suggested improving inadequate examination standards and cracking down on ‘Duit Kopi’, a euphemism for bribery, as a means to improve road safety.

“Lesen kopi is the cause,” alleged Calvin Lim.

“Too many people on the road driving with illegal licence,” added MN Mkz.

“Driving schools have to be revamped... they just teach you to pass the driving test... they don't inculcate proper driving habits,” said Periasamy Ramasamy.

“I think drivers should be reassessed after a few years. Though the main problem lies in the attitude, we should always keep in check that all drivers are competent to begin with,” explained Albert Ling.

With regard to enforcement, Richard Chew said execution of the law must be carried out more rigorously so that drivers were properly deterred from committing traffic crimes.

Last week, a study was released by the University of Michigan that ranked Malaysia among the 25 most dangerous countries for drivers with 30 road fatalities per 100,000 population.

Malaysia is 17th most deadly roads in the world, according to Michigan university research