By RAHMAH GHAZALI and KANG SOON CHEN
PETALING JAYA: A Molotov cocktail was thrown at a Universiti Kebangsaan Malaysia's students' rented house in Section 3, Bangi Perdana early this morning causing an explosion and small fire, ahead of the campus election today.

No one was hurt in the incident, although a warning note was left behind.

Engineering student Siti Aishah Shaharudin told the Star Online that the incident occurred at around 3.30am when a loud explosion was heard in her  front porch.

"We heard a motorcycle pass by the house but we didn't suspect anything until we heard a loud explosion and we saw flames spreading," she said.

While checking the compound of the house after the explosion, Aishah discovered a note clipped to one of the students' car windshield. 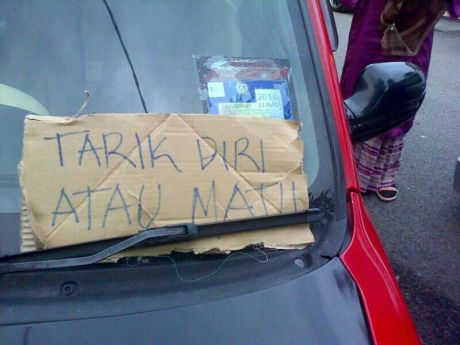 A warning note left at the car.

Some of her fellow housemates, are contesting today's student elections under the Pro-Mahasiswa banner.

"We do not know who the culprit is. But we suspect it has something to do with the election," she said.

A police report was lodged at the Bandar Baru Bangi police station at 4am.

The UKM campus election is currently underway for 2013/2014 session.

In an immediate reaction,  vice-chancellor Prof Tan Sri Dr Sharifah Hapsah Syed Hasan Shahabudin said no extra security measures would be taken in the university since the incident happened outside of the campus.

"As far as I know, the election is going on peacefully, what happened outside of the campus is beyond control, " she said when contacted on Wednesday.
She added that no untoward incidents happened during the campaigning period of the campus election.