My driver was in the parked car, says Guan Eng

GEORGE TOWN: Lim Guan Eng has said his driver was seated in his official car which was parked illegally along Lebuh Campbell when photographs of it were uploaded on Facebook.

The Penang Chief Minister, who found himself the target of criticism over the two photographs of his official car – the silver Mercedes-Benz with the registration PG1 – said he had advised his driver that it was not right to park illegally.

“My driver is wrong and if he is issued with a summons, I will not help him. If Penang Municipal Council enforcement personnel had been around and they had issued summonses to all cars except mine, then it is wrong,” he said when contacted yesterday.

Lim said he was at a nearby coffeeshop meeting journalists and a guest from Hong Kong.

The council advised its enforcement personnel not to clamp vehicles parked illegally in clamping zones if the driver was in the car.

The photograph showed the car parked along the lane, close to a clamping zone sign. Facebook user Tan Khai Beng, who uploaded the photos, stated that they were taken at 4.10pm on Monday. 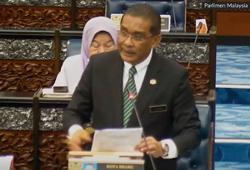