KOTA KINABALU: Malaysia's first and only upside-down house has become a tourist attraction in Sabah.

Hardly six weeks after it was opened to the public, and according to its operator Trekkers Lodge, the unique house on the foothills of Mount Kinabalu has attracted more than 3,000 visitors.

The Malaysia Book of Records has confirmed the house is one of its kind in the country.

Everything from its roof to its floor, including a Kancil parked in the garage, is upside down.

The house was built at a cost of RM500,000 in Tamparuli by entrepreneur Alexander Yee, who operates a tourist lodge in Sabah's east coast Sukau.

“Local and foreign tourists are curious about the house and have been streaming to our place since we opened (on Feb 1),” said Yee during the offical opening of the upside-down house by state Tourism, Culture and Environment Minister Datuk Masidi Manjun on Friday night.

Describing the 140sq m house as a dream come true, Yee said the house was a mix of ethnic Sino-dusun and Dusun style.

He said it was furnished with various native arts and crafts apart from the everyday household items like refrigerator and sofa sets and all were upside down.

Masidi, in congratulating Yee for his unique idea, said such an idea was important for the continuous growth of Sabah's vibrant tourism industry.

“Creative ideas need to be part of the tourism industry; not all who come to Sabah prefer to see our wildlife or islands, at times they are also here to see something different. We need to do something different to succeed,” he added.

Yee said he had an environmental message in building the house it was a reminder to protect the environment or the world would become upside down.

The upside-down house of Borneo is probably the only one in South-East Asia, though there are more then a dozen houses and buildings built with the upside down concept across the globe, including in the United States, Canada, Europe and Japan. 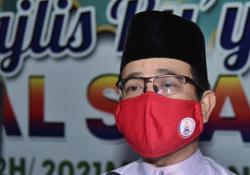