What do you do when you have a piece of coastal land that draws nesting turtles? You could build a sprawling resort and make a lot of money. Or you could start a project to protect the turtles. Meet three people who opted for the latter.

Years ago, turtles nested all along the coast of Pulau Lang Tengah, an isle off Terengganu. But tourism development changed all that, as resorts came up on almost all the beaches. With the noisy crowds and bright lights, most of the sandy beaches no longer lure turtles ashore to lay their eggs, save for two spots: one beach that remains undeveloped and another that has a small-scale resort with low occupancy and is quiet with no bright lights.

The undeveloped beach fronts land owned by Hayati Mokhtar. Three years ago, she was given the 0.2ha piece of land that her father had bought some 30 years earlier. When she discovered that turtles nest on the beach there, it took little deliberation on her part to keep the site for a turtle conservation project. Volunteers do nightly patrols to safeguard the turtle nests.

It’s been one and a half years since the Lang Tengah Turtle Watch took off, and Hayati happily notes that the scheme has saved thousands of eggs from poachers, and released over 2,700 green and hawksbill hatchlings into the sea.

Protecting turtles was not the first thing on her mind when she inherited the property. Unsure of what she could do with the land, she had headed to the island in 2012 to check it out. What she saw was in sharp contrast to her childhood memories of the place.

“There was a lot more rubbish on the beach, there was a general degradation of the corals. And each beach on the island had a resort ... not a light, wooden structure but concrete, multi-storey structures. There were just a few shacks when I last visited the island. It dawned on me that what I thought was a pristine, unspoilt piece of the island was not there any more.”

That trip triggered a decision: she would preserve whatever she could of the island, beginning with the sliver of land that is hers.

“I’m now custodian of this land. I feel a sense of responsibility. A lot of us feel powerless when faced with all these environmental issues. We feel caught up in something over which we have little influence and power. It can be debilitating. 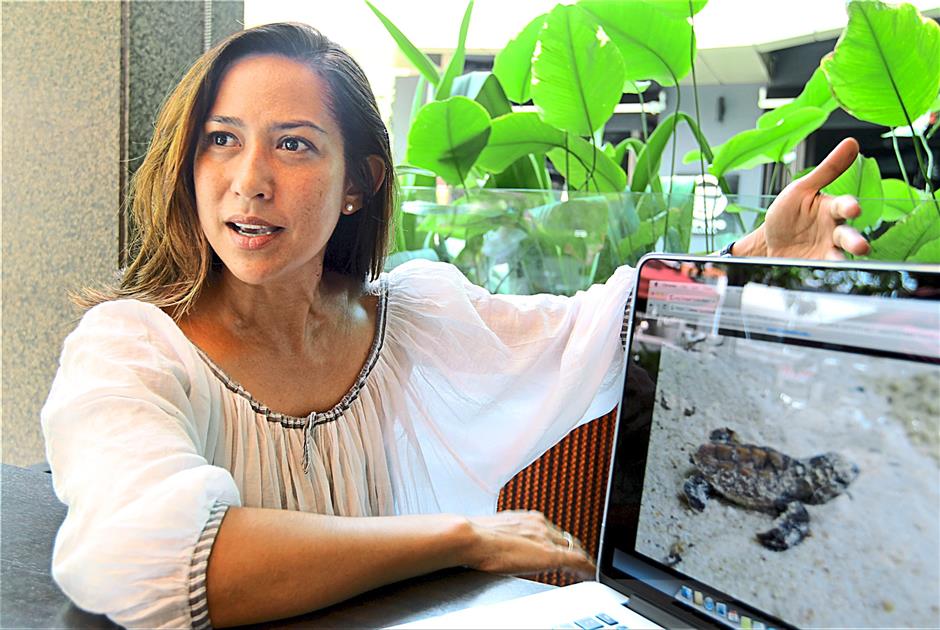 Hayati Mokhtar has trained herself on all things turtle.

“But I decided that there’s something I can do, in my own way, on my land. Instead of just lamenting the loss of a species and throwing my arms up in the air, I decided, ‘I’m going to take responsibility over what I’ve been given’. I have some control and can stipulate what happens here.”

Saving turtles is a far cry from what Hayati does for a living. She is a visual artist who had studied fine art in London. She uses moving images – often displayed as installations set across multiple screens – to examine landscapes, buildings and semi-abandoned towns. Her video installations have been shown locally and in Australia, Canada, Singapore, and Sweden.

Hayati, 44, initially had no idea that turtles nested on her beach but workers at resorts on the island confirmed it, and the name given to the area, Turtle Bay, was a clue, too. So, last year, she invited the Fisheries Department and World Wide Fund for Nature (WWF) to assess the viability of the beach on her land for turtle conservation activities.

The Fisheries officers found five turtle tracks and were not optimistic about a project there. However, Rahayu Zulkifli, who was heading the WWF turtle conservation project in Terengganu then (she has since left the organisation) advised Hayati to do a project even if only for a year, as there was no information on turtle nestings at Lang Tengah.

“We don’t know what turtle species come up. Rahayu said it might be worthwhile doing the project just to get the data. So I decided to go ahead and take it one step at a time.”

She applied to the state government for turtle collection rights, and was successful. Fortunately for her, the tender covers the whole island and not specific beaches, like elsewhere. So she has rights to not only the eggs laid on the beach fronting her property, but for the other beaches as well.

“Turtle populations in Terengganu have plummeted. Entanglement in fishing gear and loss of feeding grounds due to marine pollution have contributed greatly towards this decline, while hotel development has limited the availability of nesting beaches. But it is the practice of egg collection that has almost wiped out populations in Terengganu. So, one of our primary tasks is guarding the turtle eggs,” she says.

To be sure that they did things right, Hayati and her staff underwent training done by WWF. They learnt things like how and when it is best to move the eggs, and to build nests with the right depths and widths for re-burying of eggs. Last April, the Lang Tengah Turtle Watch kicked off with local volunteers and students from the universities of Cambridge, Birmingham and University College London.

They soon discovered that turtles nest only on two beaches: Turtle Bay and Lang Sari, which has a small resort. However, the eggs were being poached by resort workers. Some were sold and some were incubated to obtain baby turtles that could be shown off to tourists. However, the hatchlings were kept in small containers and fed with bread. “People don’t understand that bread is not part of a turtle’s diet. There are no loaves of bread in the ocean, and commercially made bread is full of additives,” says Hayati.

At least eight volunteers are needed each day to safeguard the nesting turtles; they take turns to patrol both beaches for nests at nights. Their constant presence on the island is the main deterrent to egg poachers. The eggs laid at the 50m-long beach at Turtle Bay are left as is, while those on Lang Sari beach, where chances of poaching are higher, are relocated to Turtle Bay. The nesting season runs from March to October. 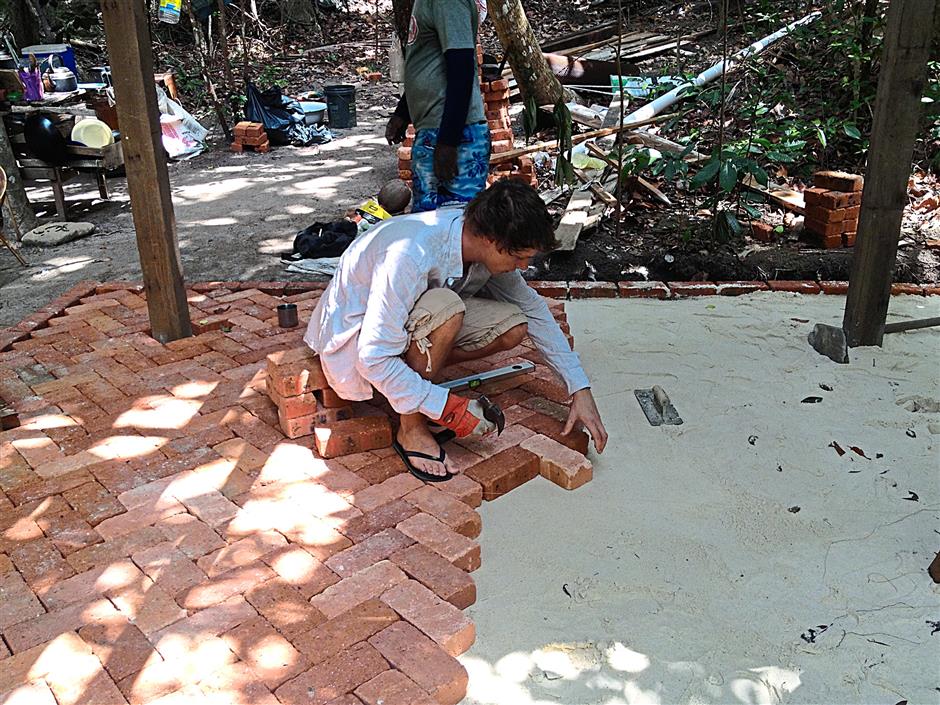 Aside from recording turtle nestings on the island, wildlife conservationist Raphe van Zevenbergen helped build a kitchen for volunteers of the Lang Tengah Turtle Watch project.

Assisting Hayati is Raphe van Zevenbergen, a volunteer from Britain who stayed on to manage the project. He had studied wildlife conservation and has participated in similar conservation projects in Madagascar and Costa Rica.

Last year, they rescued 28 nests on Lang Tengah. The hatchling success rate was 71% and all were green turtles.

“We saw 2,298 hatchlings successfully make it into the water, which is 2,298 that would have definitely never have made it had we not been here to help stop the poaching,” says van Zevenbergen, 23.

This year, there have been 11 nests; seven of green turtles and four of hawksbill. Post-hatch inspections of three green turtle nests showed 204 hatchlings from 233 eggs. In another three hawksbill nests, there were 285 hatchlings from 307 eggs. The discovery of nesting hawksbills is exciting, as the species no longer nests on the Terengganu mainland, and only in small numbers on Pulau Redang.

The project relies on the support of volunteers, which numbered 24 last year. This year, it has had 35, with groups coming from the Malaysian Nature Society and Taylor’s University, as well as foreign students and travellers. The rates are RM560 a week for Malaysians and RM800 for foreigners.

Safeguarding the nests simply would not be possible without the volunteers, as there are people still eyeing the eggs.

“One man says that if we were not there he would take the eggs,” says van Zevenbergen. “That is why we must be ever-present on the beaches, otherwise all the nests on the island are doomed.”

Aside from the nightly patrols, the volunteers inspect the nests every three days once the eggs are 45 days old. This is to ascertain whether the nest has succumbed to rot from fungal infection. If so, the affected eggs are removed (to prevent contaminating the other eggs) and buried elsewhere as they do sometimes hatch. If the nest has been predated upon by ants or crabs, it is relocated. 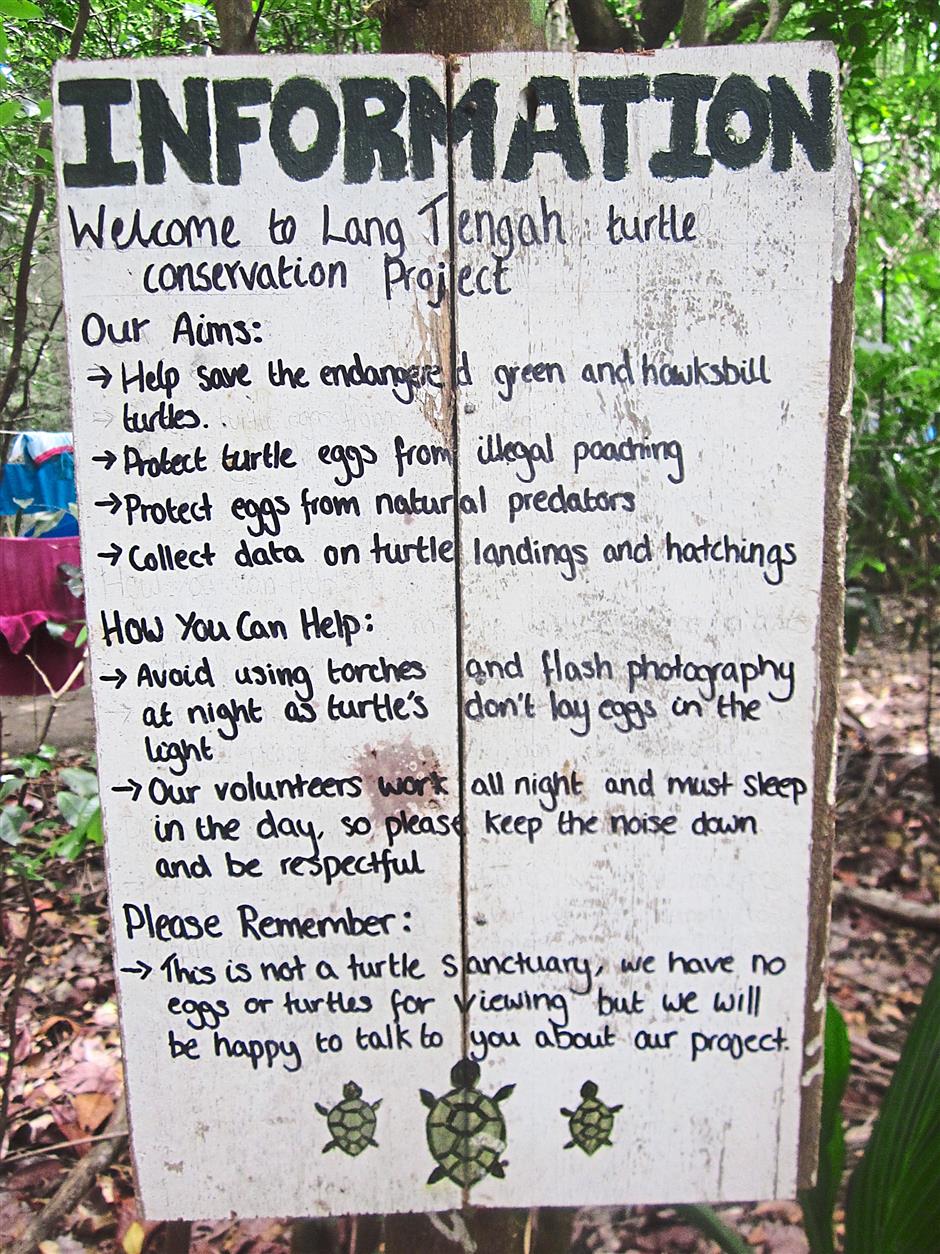 This sign informs visitors of the dos and don'ts to safeguard green and hawksbill turtles which nest on the island.

The volunteers also help out around the camp with various chores, such as cooking, cleaning and firewood collection. But there is always free time to go jungle trekking and snorkelling. They also support other conservation efforts on the island, such as helping to monitor the reef and “plant” corals in a coral regeneration programme initiated by a dive centre on the island.

Hayati is still uncertain about the long-term viability of the project as the turtle landings are still random and lower than at other major nesting sites. One concern is: what happens if paying volunteers come but no turtles come ashore? It is the experience of helping with turtles that the volunteers are paying for, after all.

But she is not giving up as she sees a value in her endeavour.

“Though the focus is on turtle conservation, the stay will also acquaint city folk with nature. Even if the volunteers don’t see a turtle during their trip, they will see a star-strewn sky, something you don’t get in KL. They get to experience nature, they get to interact with nature.”

She plans to offer more activities for the volunteers. A visiting botanist from Hong Kong has alerted her to the presence of protected plant species on the island, including orchids and cycads. With more surveys, other interesting flora and fauna might show up. Hayati says these could be shown to the volunteers to broaden their knowledge and enrich their experience. So she is keen to work with researchers who want to study the wildlife of Lang Tengah.

“To ensure that our migratory population of turtles continue using the island as a nesting ground, we need guardians to stop the poaching activity. Our operation can only function if we have a dedicated team of individuals willing to take part in our conservation practices.”

Rather than feeling powerless in a world filled with environmental woes, this endeavour is what Hayati feels she can personally do, for an endangered species.

> To learn more, go to www.langtengahturtlewatch.org.