TECH company director Rastam Hadi Samsudin was already expecting representatives from Maxis Bhd to deliver his brand new iPhone 6 Plus at Sunway Pyramid’s TGV cineplex, where he was watching a late night movie.

What he did not expect was for Maxis chief executive officer Morten Lundal and the telco’s management team to personally deliver it to him, as part of the telco’s “Midnight Express” promotion for the iPhone 6 and 6 Plus release in Malaysia.

Viewers at the cineplex were about to watch the sci-fi adventure Interstellar, when suddenly the lights were turned on and Lundal came onstage to address the audience and the unsuspecting Rastam. 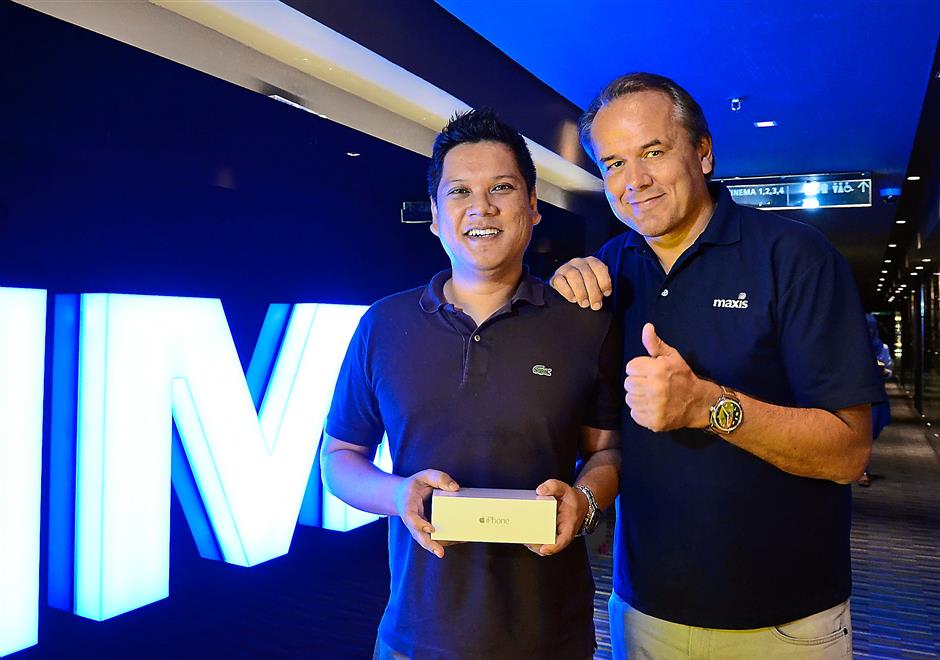 Rastam (left) holding his new iPhone 6 Plus, as Lundal gives the thumbs up.

Lundal announced that similar Maxis teams were going all over the country to deliver the iPhone 6 and iPhone 6 Plus to about 200 randomly selected customers who had pre-ordered the devices via Maxis’ Online Store from Oct 31 onwards.

“Right now, other Maxis teams are also going across the country to deliver the iPhones as part of our delivery service,” said Lundal to the audience before calling out Rastam to hand him his device.

The latter could not stop smiling as he came down the aisle to receive his iPhone Six Plus to the applause of the rest of the viewers who were also given a free screening ticket each by TGV Cinemas.

“I had originally intended for the iPhone to be sent to my home, but then there were plans to watch a movie the same night, and I asked the Maxis people whether they could deliver it there,” said Rastam.

“After a quick discussion, they said they could do it. I just did not expect the CEO himself to come down to deliver it. It was totally unexpected,” he said.

For more information on Maxis’ rate plans for the iPhone 6 and iPhone 6 Plus, visit www.maxis.com.my/iphone