Helping in any way they can

For mobile soup kitchens, continuing to feed the needy is top priority, regardless of the cost and despite the recent ban on such groups operating in the city centre.

THE dictionary identifies a soup kitchen as a place where free food is served to the homeless or destitute.

It may be at a proper centre or it may be conducted via a mobile kitchen where food and drinks are served to the needy.

Dating back to the 18th century, soup kitchens emerged in Western countries where there was famine and depression, to help decrease the number of deaths from starvation. Patiently waiting: The needy queuing to get their packed meals from Reach Out at a street feeding session in Kota Raya. — Photo by RICKY LAI

Mostly bread and soup was served and water was sometimes added to the soup to serve more people and help keep the homeless warm during cold seasons.

This was how the term “soup kitchen” came about.

In Malaysia, however, the soup kitchens seen all around Kuala Lumpur are organised mostly by community groups who want to help the homeless.

Meals served can range from pasta to local dishes like nasi lemak and curry.

Only a handful have proper centres set up while the rest are mobile kitchens.

The latter, however, are required to cease operation after Hari Raya Aidilfitri in accordance with the ban on mobile soup kitchens operating within the 2km radius of Lot 10 in Kuala Lumpur, announced by Federal Territories Minister Datuk Seri Tengku Adnan Tengku Mansor.

Star Metro joined a few of the mobile soup kitchens on their street feeding rounds to see for ourselves what it involves.

Getting a proper centre to serve food to the homeless may not be feasible for smaller welfare organisations.

With the high rental in the city, renting a proper place and getting enough volunteers to man it day in, day out, is a challenge for most groups.

Only a few, such as Kechara Soup Kitchen and Grace Community Services, serve food from their premises located in Jalan Imbi and Jalan Bunus, respectively.

Meanwhile, soup kitchens such as Dapur Jalanan Kuala Lumpur, Kenosis Home, Reach Out and even Pertiwi Soup Kitchen are serving meals on wheels.

About 11 main soup kitchen groups have been identified, with a majority of them providing food on the streets within the banned area. 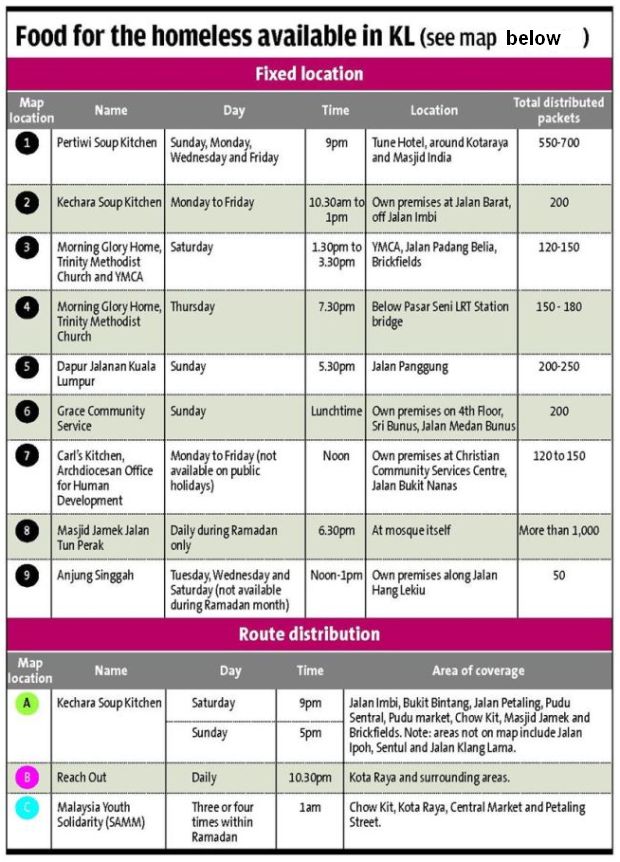 Reach Out founder Peter Nicoll, who has been feeding street folk the last eight years, said the biggest problem they initially faced in carrying out their mission was public ignorance.

“Many believed that those out on the streets were either foreigners or drug addicts. It is not true and from my experience, the demographics of these hundreds of homeless reflect Malaysia’s demographics,” he said.

Reach Out, which will be affected by the ban, believes that street feeding is a tool to build trust with this community.

“Our objective is to find out what happened that caused them to live on the streets. Then we are able to work out a solution to help get them off the streets.

The one thing we will never do is give them money, not now or ever,” he stressed, adding that Reach Out fed the homeless every day, regardless of festivals or events.

Nicoll said an average of 13,000 food packets were distributed per month to feed the homeless in Kuala Lumpur and Klang.

“Our food comes from sponsors, including a hotel, and when it is not Ramadan, from the Federal Territories Islamic Department (Jawi) as well. When volunteers or others wish to donate food, we vet it to ensure quality and that it meets all religious requirements,” he said, adding that they usually tried to give a hot pack of cooked food, water, crackers, packet drinks, fruit and something sweet like buns.

Nicoll said sometimes other groups such as Hopebox would join them.

“On average, we have between 15 and 20 volunteers every night in Kuala Lumpur and 15 in Klang. The van we use was donated to us and its petrol is paid for by collecting cardboard boxes for recycling,” he said

Reach Out, he said, now has a few thousand supporters from 45 countries through its Facebook group and at its peak, had 58,000 hits.

He said they were never called to any meeting or dialogue and their biggest challenge right now was finding out what was going on.

“This is a very confusing situation but we are sticking to what we know best, which is to continue our work this way. We do not have the money to set up a proper centre, and preventing us from doing this is just depriving the homeless of help they need,” he added.

“Honestly, we were quite offended when we read in the news about how soup kitchens are dirtying the streets.

“We do not dirty the streets at all as hygiene and cleanliness are our priority,” said Mandeep Singh.

The 28-year-old started Dapur Jalanan Kuala Lumpur with about eight other friends and they forked out their own money to get food for the homeless.

Now, they have about three qualified chefs who volunteer to cook for their street feeding every Sunday, where they serve the homeless on the spot rather than pack it in containers. There are also regular donors who help pay for the food.

They serve about 250 people on normal Sundays, except for during Ramadan, when only about 70 people show up.

“Also, I think the homeless are afraid of the Ops Qaseh and most of them are in hiding from the authorities, afraid to come out even to take food,” Mandeep Singh said.

Dapur Jalanan is assisted by about 20 regular volunteers, with the occasional student groups joining them.

The homeless are instructed to dispose of their trash in garbage bags after eating.

“We are in the 2km radius ban but we will continue feeding in the same spot until there are no more homeless people on the street,” he said. Although Kenosis is not affected by the ban, its co-founder pastor Richard Lee points out that it is very costly to have a proper centre in the city centre just to cook and serve food to the homeless.

“We cannot afford it. But we always make sure our food is hygienically prepared and we clean up after the session,” he said.

Lee, who had previously lived on the streets when he was a drug addict, said the homeless community were disciplined and would throw the waste into the garbage bags provided after eating.

During StarMetro’s tag-along with Kenosis Home on one of their scheduled street feeding days, we saw how the food was prepared fresh by Kenosis Home’s residents at their Morning Glory Home in Petaling Jaya.

“A majority of the residents at the home are formerly homeless and they understand how it was like on the streets,” he said.

On Thursdays, the meal consists of vegetable curry, sambal, eggs, rice and Chinese tea while on Saturdays, curry chicken, potatoes, bananas and teh tarik are served.

The big pots and containers of food are loaded into their mobile food truck about 4pm and then it makes its way down to the bridge beside the former Kuala Lumpur Railway Station.

Volunteers arrange tables and chairs about 6pm, for the destitute individuals who will arrive later in the evening.

At about 7pm, some of the homeless community were seen strolling towards the chairs to sit and wait for the food.

Volunteers will then start packing the food and placing it on tables before serving it to the homeless community.

“Since we started, we have never had problems with littering or dirtying the area as we often remind them to throw their rubbish into the bags provided,” said Lee.

He confirmed Kenosis would continue feeding the homeless on the street as they were outside of the 2km radius ban.

“Most of the people we see here genuinely need food, support and trust,” said a volunteer, Susan Yong.

The 80-year-old, who is a certified nurse and psychologist, said she was aware how needy the homeless were after talking to them and getting to know them.

“It’s rare that you see them taking advantage of free food, maybe one or two would, but the majority of them just cannot afford to buy food,” she said.

Even those holding jobs would usually either be shortchanged by their employers or paid only a measly sum like RM10 a day.

Yong said the Government’s plan to just take them off the streets and give them jobs was not as easy as it seemed.

“Most need trust, understanding and most importantly, a good support system as without it they will just fall back to living on the streets.

“Bringing them food is a way of earning their trust and getting them to open up about their problems.

A night on the streets

The homeless want to be heard