Foreign workers getting off factory buses which transport them to and fro their workplaces.

SHOPLOTS in the commercial centre of Taman Aman Perdana in Meru, Klang, have been turned into hostels for foreign workers, who live in less-than-conducive condition.

The workers are occupying almost the entire ground and upper floors of the multiple shoplots in the commercial centre.

StarMetro visited the area and found about 150 shoplots at the commercial centre of the elite neighbourhood made up of semi-detached houses and bungalows.

Except for several ground floor shops housing businesses such as a mini market, four restaurants, a launderette, a car accessories shop and two car workshops, checks revealed that the rest of the blocks have been turned into workers’ hostels.

The two streets in the commercial area -- Jalan 1A and Jalan 1C -- where several blocks of double and triple-storey buildings are located, are quiet and tranquil during the day but burst into a hive of activities in the evening.

Residents said the situation was worrying. They call it a foreign enclave, populated by nationalities from South-East Asian and South Asian countries.

The residents claim that the commercial centre, built to serve the needs of more than 2,000 households in the residential area, has become irrelevant to them as the shops there do not offer goods and services that they require.

While there are a few businesses owned by the locals, checks also revealed that a number of the premises on the ground floors have been turned into shops by the foreigners.

In most of the shoplots, business enterprises are set up in the front while the back portion of the premises is used as living quarters. Foreign workers hang their clothes all along an emergency exit at one of the shoplots.

The businesses operated by the foreigners cater for the needs of the workers living there, selling items such as sundries and toiletries. Some even sell chicken in the back of the shop.

The traders also sell cheap liquors of various brands including contraband from their workers’ respective country of origin.

In the evenings, the workers can be seen hanging out on the streets and five-foot ways, usually gathering around the shops owned by their countrymen.

Their favourite pastime appears to be playing carom and they normally play the game along the corridors in front of the shops.

During weekends, a large number of the workers play cricket.

The workers prefer to spend time outdoors because the shop-hostels have between 60 and 80 workers in poor living environment.

Most of the “hostels” only provide shared bedding where two people have to share the use of a bed based on shifts.

A worker, who only wished to be known as Jamal, said that he and his friend took turns to sleep on the bed as they worked on 12-hour shifts.

“My friend will get the bed when I am at work, and when I come back to get my rest, he will be headed out to work,” Jamal explained.

While pointing at one of the many double-decker beds in the unit, he said: “We have to keep our belongings in our bags every day before going to work so that the bed will be kept clear for the other person to sleep in,” he added. 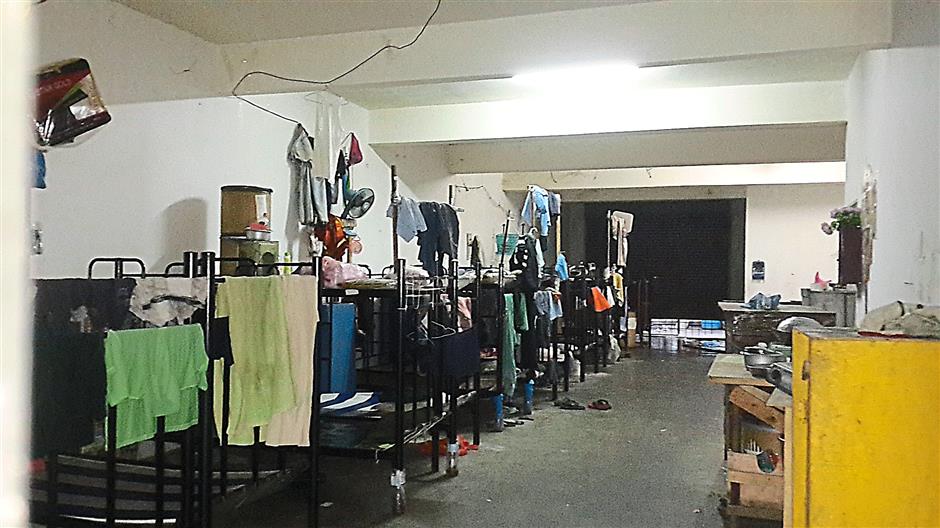 The hostel is stuffy and dirty.

At some of the premises, the workers are provided with a small cupboard for them to store their belongings.

Besides sharing beds, they are also forced to put up with unhygienic condition at their “hostels,” which only have a bathroom and a toilet.

As the premises are kept locked at the front and back, they also lack ventilation.

In most premises, it is observed that the workers cook their own meals. Stoves and gas cylinders are a common feature in these units.

The back lanes of the commercial centre are also in a sorry state, with rubbish strewn all over, resulting in an unbearable stench.

Added to that are all sorts of unused as well as discarded items including furniture, containers and mattresses stacked up along the back walls of the shops.