'Express' hotel to open in KL

THE Pacific Express Hotel, operated by the Pacific Regency Hotel Group, will open its doors in the heart of the city on June 1.

The hotel, which will have 207 rooms, features contemporary designs and efficient utilisation of space in rooms that start from 20 sq m.

“This marks our first foray into the ‘express’ hotel sector.

“Pacific Express Hotel is built in accordance with four-star standards and is equipped with modern amenities and leisure facilities,” said Pacific Regency Hotel Group executive director KC Lim in his speech at the launch of the hotel.

Located in Jalan Hang Kasturi, the hotel is within walking distance of some of the city’s popular landmarks including Dataran Merdeka, Masjid India, Central Market and Petaling Street. 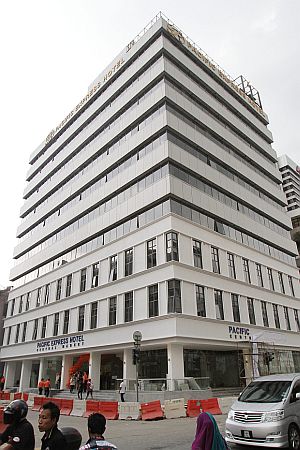 The facade of the hotel in Jalan Hang Kasturi.


The hotel has four types of rooms — standard, superior, deluxe and pacific.

Rack rates begin from RM180++ per room but as an opening promotion through June 30, special room rates will start from RM130++ per night and include breakfast.

Pacific Regency Hotel Group general manager J. Kumar said by the fourth quarter of this year, they would open another property in Shenyang, China.

For details or reservations, visit www.pacific-express.com.my.