Putting her skills to good use

Homeless folk in the city enjoy the free haircut service provided by volunteers from Pertiwi Soup Kitchen on the sidewalk along Jalan Tunku Abdul Rahman.

Not content with just being a volunteer who distributes food to the homeless in the city, a hairstylist decided to put her skills to good use by giving free haircuts to the marginalised group.

Nur Azmina Ahmad Burhan, a hairstylist since the age of 19, was an active volunteer with the Pertubuhan Tindakan Wanita Islam (Pertiwi) Soup Kitchen project for more than two years before she resolved to do more for the homeless.

The gutsy and passionate hairstylist decided to provide the free service away from the comforts of a hair salon, choosing instead the sidewalk in front of the CIMB bank along Jalan Tuanku Abdul Rahman (TAR).

“I first volunteered to help Pertiwi Soup Kitchen distribute food to the hundreds of homeless people around the city in 2010,” Nur Azmina recounted.

“I felt so sad seeing the many men and women, young and old, who came to collect food at least three times a week, and thought of doing more for them than just distributing food. It was then that I decided I could give them a haircut. A homeless family waiting in line for the free haircut service by volunteers from Pertiwi Soup Kitchen on the sidewalk along Jalan Tuanku Abdul Rahman.

“Two years on, it still gives me great personal satisfaction and joy when I see their satisfied and happy smiles after a haircut.

That is what keeps me going even though I may be tired after a day’s work at the salon,” she said.

After finishing her day job at her hair salon in Bukit Damansara at 6pm, Nur Azmina would don her belt filled with scissors and combs again at 9pm and snip away for at least another four hours.

“When I first started to give free haircuts, there were few takers.

“But as they became more comfortable with the idea of having a haircut in the open and by a familiar face, the number quickly grew,” she said, adding that she gave an average of 15 haircuts per night.

To cope with the increase in the number of homeless people needing a haircut, Nur Azmina roped in three of her friends to assist her. 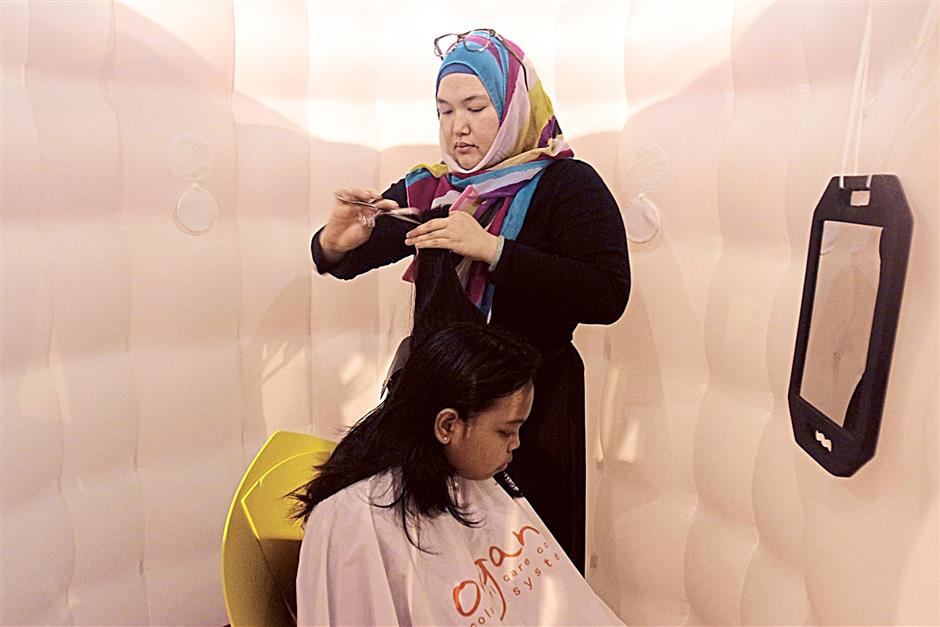 Nur Azmina giving a little girl a haircut in the inflatable ‘Pop Up Salon’.

Nur Azmina says that she spends between 10 and 15 minutes cutting the hair of each person.

Those opting for a clean bald look or a short hairstyle are the easiest as she can use a battery- powered clipper to achieve their desired look.

“I actually get requests for various styles, even one sported by famous football star David Beckham.

“I never turn down requests. Regardless of wealth and social status, everyone wants to look good.

“Even though they are not paying me for the haircut, I still refer to them as my customers and treat them with the same dignity and respect as the paying customers at my hair salon.

“They are treated as an equal member of society and not a poor homeless man or woman,” she said.

Nur Azmina said she would occasionally shampoo the hair of some of the homeless people as it was very oily.

She also revealed that the popular notion that homeless people are filthy and full of lice was far from the truth.

“Apart for the oily hair and scalp, they are generally clean.

“In my two years here, I have only had a few homeless people with lice and I cut their hair short and treat it,” she said, adding that she has never felt disgusted or turned away a homeless or poor person needing a haircut.

In the two years Nur Azmina has offered to give free haircuts on the sidewalk, she noticed that women were not as keen on getting their haircut by the side of the road.

“I think generally women are very shy and uncomfortable with sitting in the open and having their hair cut with passers-by being able to stare at them.

“Furthermore, no Muslim woman wearing a headscarf would let their hair be seen in public.

“I mentioned this to a family friend and the person came up with an idea to create a temporary pod which takes only minutes to set up and is easy to pack away for storage,” she said.

Almaz Rahim, 55, an architect by profession, asked her daughter who runs an inflatable structure business in the UK whether it was possible to design something that met Nur Azmina’s needs.

“My daughter loved the idea and we immediately began designing the inflatable structure. It was Nur Azmina who suggested the name ‘Pop Up Salon’.”

“Six of my female architect friends loved the idea and they decided to help contribute to the cost of the structure which came to around RM7,000,” Almaz said.

On the launch of the ‘Pop Up Salon’ on April 14, several homeless women decided to try out the haircut service in the privacy of the inflatable structure.

Although they declined to speak to the media after their haircut, the satisfied look on their faces said it all.

“I’m sure this would encourage many more women to come forward to have their free haircut here.

“It has been quite a journey so far, but there is still a lot that can be done for the homeless and the marginalised groups in the city,” Nur Azmina said.

For more information on the services offered by Pertiwi and how you can help, visit their website at http://pertiwi.org.my