Set to go places with Jombola

JOMBOLA, a Malaysian sport, created by history teacher Sukdev Singh, was conceptualised in 2000 on a public tennis court in Taman Melawati, Kuala Lumpur.

Sukdev got the idea when he was unable to play tennis with his family as skateboarders had disrupted their game at the tennis court. He decided to head to a three-metre-high practice wall behind the court.

As he played, the ball kept landing in a jungle behind the practice wall. Sukdev and his family members spent more time looking for the ball than playing tennis.

Sukdev felt that it would be good to have a ball that did not bounce so much. It then took him four years to develop a ball, which is used today for the sport.

He said the inflated and solid balls were useless for the cause. Through trial and error, he managed to have a functional ball and racquet by 2006.

As a teacher at Sri Damesh School, Kuala Lumpur, Sukdev organised a game for boys and girls in 2009, which was well received by the students and called “Slamball” then. A student smashes the ball during a training session held at Kolej Vokasional Shah Alam in Batu Tiga Shah Alam.

However, the name “Slamball” already existed so a new name had to be given.

Sukdev, now 60 and currently the Jombola Association Malaysia president, then came up with 10 names, of which five were shortlisted.

He asked a classroom of 14 students to choose the name in secret, hence the catchy name “Jombola” came about. Some claimed that it sounded like a Spanish name while others said it sounded Brazilian.

One student said it was similar to the name of the ball that had been used in the South Africa 2010 FIFA World Cup called “Jabulani”.

Jombola is played on a badminton court using a high foam ball weighing 40g, a racquet (a longer version of a table tennis bat) made out of fibre weighing 280g and with a 1.3m-high net.

Combining the unique features of four popular games – tennis, badminton, squash and table tennis, Jombola can be played by people of all ages. 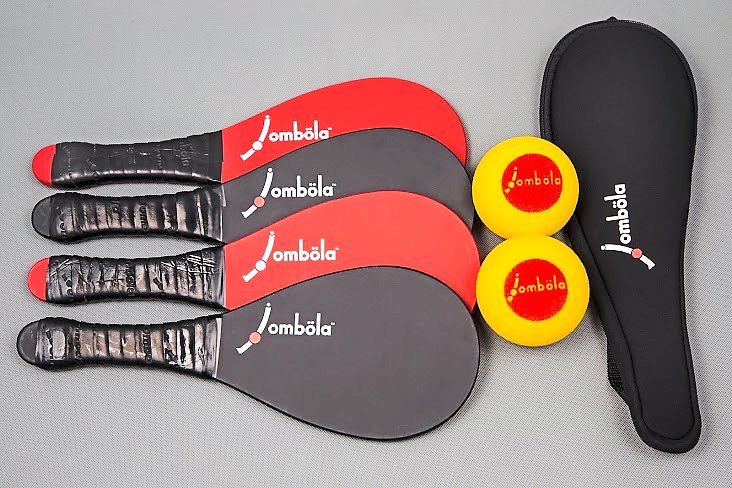 The Jombola racquets and balls with a cover for it. The racquet weighs 280g.

With support from the Youth and Sports Ministry and Education Ministry, the sport is being promoted among schoolchildren.

Currently, Jombola has been introduced to 30 schools in Kuala Lumpur and another 30 in Selangor, with special training courses for teachers since its inception.

Six months ago, there was a Petaling Perdana district Jombola competition held at SMK Seafield for students.

The sport has even been introduced to some universities in China and India.

On June 28, 2012, a training delegation from Korea National Sports University in Seoul, South Korea, took part in a Jombola training session in Malaysia.

The sport was subsequently introduced in South Korea and in Chennai, India in July 2013), in Bangkok, Thailand in August 2013, in Nanning, China in September 2013 and in Mumbai, India in October of the same year.

Sukdev said the sport was now played competitively among students and teachers in universities across Malaysia. 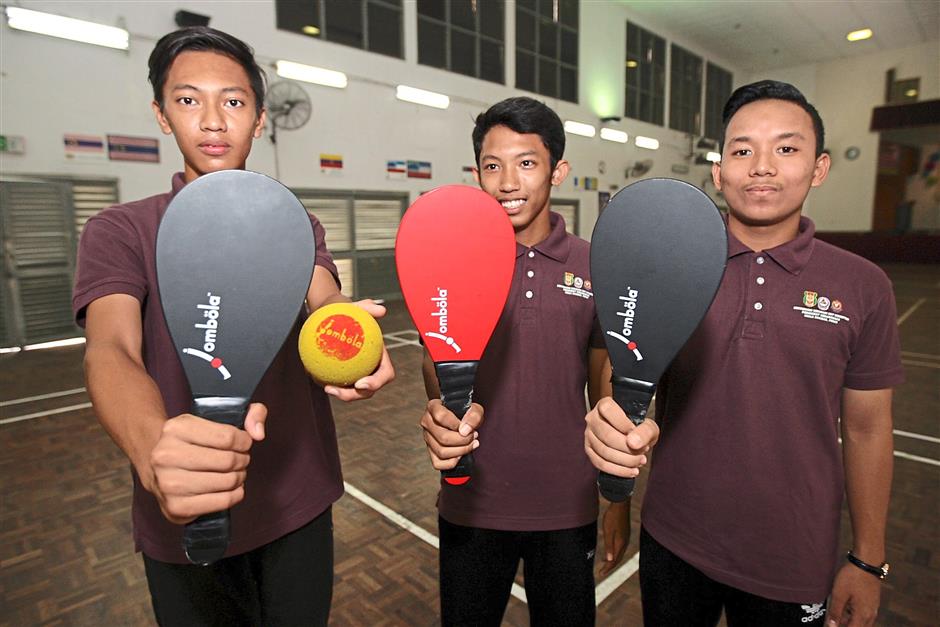 There is a lot of interest from students who are eager to learn the game. — Photos by IBRAHIM MOHTAR and AZLINA ABDULLAH / The Star

“The sport is very popular in Kuala Selangor and Negri Sembilan, where regular badminton players are switching to Jombola as it is cheaper.

“The switch from badminton to Jombola is highly likely because players can save on buying shuttlecocks which can be expensive.

“I feel this new sport should be mastered by Malaysians before it becomes internationally well-known. And why not? We already have the facilities for it,’’ he said.

Sukdev pointed out that there were many underutilised outdoor badminton courts in parks, housing areas and even villages where the weather is unpredictable.

“But Jombola can be played outdoors because the windy conditions will not affect the movement of the ball as it is slightly heavy compared to a tennis ball.

“From the feedback I received, the sport is starting to have a following. Like a father who sees his newborn take their first steps, I am proud that there are Malaysians who are eager to help this sport evolve.

“Currently, there is still a lack of funding from sponsors as Jombola is relatively new and not many people know about it.

“I hope this will change soon.

“We are looking to have Jombola to be a demonstration sport in the 2017 SEA Games, which Malaysia will play host to.

Eventually, it can be one of the sports in the 2019 SEA Games. We are also aiming for it to be in the Asian Games and even the Olympics in the near future.

“If this happens, we are likely to win a medal if we master the sport before other countries,” said Sukdev.

Teachers and students give Jombola the thumbs up