The coffee joint that isn’t

Foo, Ooi and Tan are the brains behind Battery Acid Club.

Battery Acid Club is a cafe that’s not just a cafe, but a place where designers can network, be inspired and buy ‘designery’ stuff.

The next time you pay RM11 for a cup of coffee, you might just reap greater rewards than just a caffeine kick – especially if you’re a designer and you’re at the Battery Acid Club in Damansara Utama.

This is what business partners Foo Hsiang Hsien, Aaron Tan and Ooi Swiss Tee set out to do with their cafe-that’s-not-just-a-cafe.

Adamant not to operate yet another coffee joint, the trio call it a “safe space where creative minds can converge and grow”.

With their background and experience in the creative industry, Tan says they wanted to put together a venue that would bring together the local design community and create value for them.

“We want to make it a platform where designers of different fields can network, meet people and perhaps obtain professional opportunities,” he states.

Tan, who spent a fair amount of his creative career struggling to make it worthwhile, thought it was best to change direction in his career.

“I no longer wanted to focus on being a designer; instead my focus would be on designers themselves,” he says. 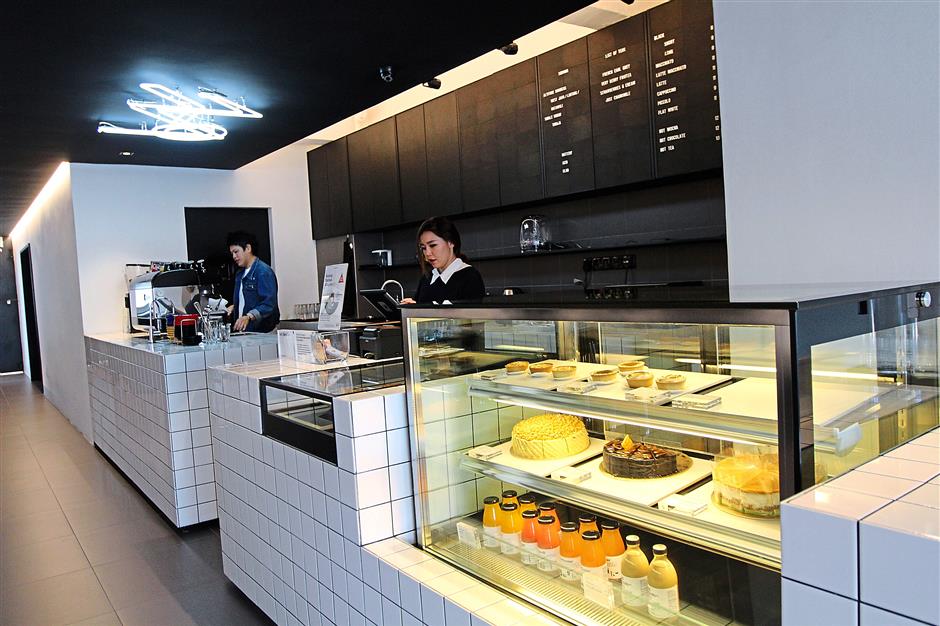 Coffee, juices, cakes and inspiration are on the menu here.

For Tan, one of the major purposes of Battery Acid Club is to make it a sharing platform above anything else.

“As a person from design, I can relate to the predicaments that designers face. Sometimes passion does not pay off. That’s why I want this to be a place that offers designers a chance to network for exposure, collaboration, talent expansion and an avenue to excel in what they’re good at,” he says.

“We want to help spur businesses if possible,” he stresses, saying that this could be achieved through referrals and events they host.

At Battery Acid Club, the coffee comes with cakes and pastries, and side serving of “no Internet connection”.

“We observe a no Wi-Fi policy here as we want to promote conversation in such a way that bonds can be deepened and ideas can be bounced around,” notes Tan.

Foo says every detail in the shop, including furniture, paint and texture on the different walls, was scrupulously thought through before execution – via two silent partners who are interior designers.

“For instance, our benches are not mounted to the wall. They are modular boxes that can be moved around freely. The wires on the walls are not just for decoration: they allow images to be hung and exhibited,” explains Foo.

The idea behind all this is so that Battery Acid Club can be converted into a small gallery as and when required.

“We are going to make events and shows happen here. There are lots of possibilities in store. In fact, we are hosting our first two events this month – a product launch and a sharing session among architects,” he says.

Since opening, Tan says, some interior designers have dropped in just to observe the detailing in the shop. Every quarter, Objekt-Object, the retail unit within the cafe, features a designer as well as works they consider relevant.

“We’ve even received enquiries about the things we use. In a way, this place is like a showroom for ideas,” he says.

Tan points out that there is a purpose to everything in the shop.

“It’s like when you design. There is a rationale behind every detail. You look at functionality, form and purpose, beyond just aesthetic value,” he explains.

There is also another gem within the shop known as Objekt-Object, which is the retail unit of the business. The café and retail entities are under one company, Form & Format Sdn Bhd. Taking up only a quarter of the shoplot, this shop within a shop features unique designer merchandise, both local and overseas.

“Initially, we had hoped for a full-fledge retail store because the food and beverage business can be quite tricky; we didn’t want to be just another café,” says Tan.

However, the partners felt that it was not viable if they focused only on retail.

“We thought why not stand out by combining them? They’d complement one another, and simultaneously, give a chance to both entities to gain cash flow,” elaborates Tan.

Tan says at the moment the retail space is not at its optimum level yet.

“We’re trying to make it a lifestyle store. That said, we hope to expand the size of it, but in the meantime, we will be putting the store online,” he adds.

The partners admit that they are still new to the scene and are looking for the right business model.

“What we can focus on right now is the awareness for what we do and what we wish for others to achieve here,” says Tan.

“I hope that when people come here they’ll benefit from something or get inspired, from the things that we put in the shop to the books that we have, and even items that we sell.”