Break the law, lose your vehicle

HUNDREDS of privately-owned vehicles, including luxury cars, used for ride-share services have been impounded.

The cars, used by Uber and Grabcar, had been towed to the depot by the Land Public Transport Commission (SPAD).

The cars were impounded for illegal usage under Section 16 of the Land Public Transport Act 2010.

Some of these private vehicles have been left to rot for over a year while waiting for the courts to decide on the issue.

Some cars have even been forfeited and are waiting to be auctioned. The SPAD impound centre in located at an secured place away from the city.

These vehicles, including commercial vehicles such as taxis, vans, stage buses, express buses, school buses, tipper trucks, lorries and garbage trucks, were seized during various operations for flouting rules such as no permits, expired licences, not using the meter, overcharging and various other offences.

According to a senior officer from SPAD’s administration department, the private cars were seized by officers who went undercover by posing as passengers after booking trips via ride-sharing apps such as Uber and Grabcar.

“Once caught, the cars will be brought to the depot and we will process the paperwork for the court proceedings.

“The case will have to be registered in 30 days, and after that, it is up to the courts to decide,” said the officer who wished to remain anonymous.

“The court proceedings can drag on for months. We even have cars that have been stuck in our impound yard for more than a year now,” he added.

Irrespective of the court’s decision, SPAD charges a daily fee for holding the cars in its depot.

According to the officer, apart from the towing charges, which are set at RM300 for private cars, the daily charge for holding a private vehicle is RM150.

“The RM150 storage fee can be a huge burden for the average man who is already facing financial problems.

“So if your car is impounded for six months, when you eventually get it back, you would have to pay a whopping RM27,000,” the officer explained. 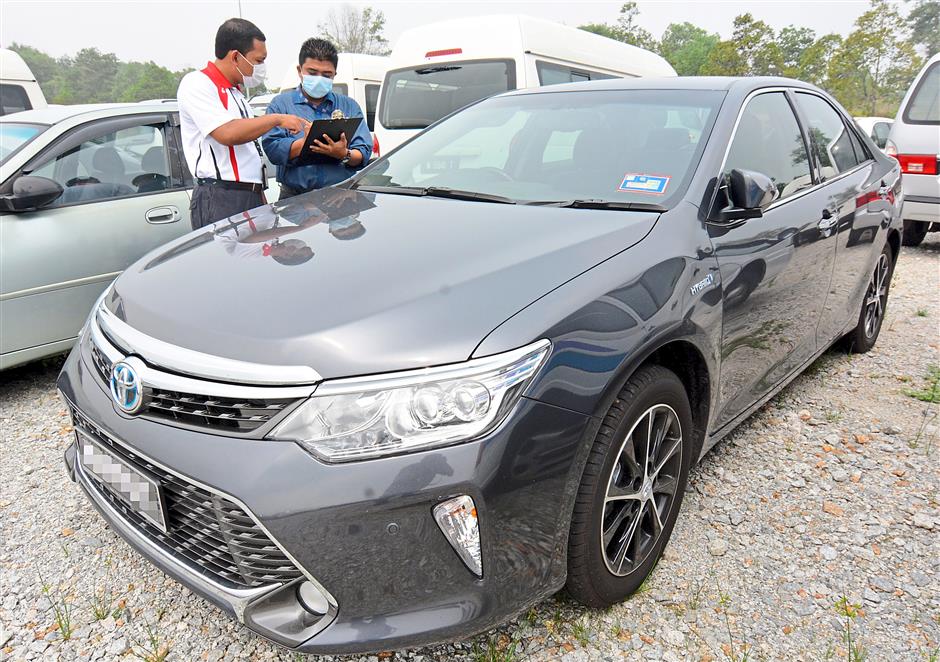 SPAD officers doing an inventory on the impounded private cars.

He added that the authorities were currently processing the paperwork to auction off some of the cars.

“Once the case goes to court, we have to wait as court proceedings can take a long time.

“SPAD has no power over the time frame, but the daily charges will still apply,” he said, adding that the court would also impose its own fines.

“The fine from the court can be anything from RM5,000 onwards.

“In cases where the court decides to forfeit the car, SPAD can proceed to auction it off,” he added.

On the disposition of seized vehicles, he said SPAD would either conduct an open tender or an auction to dispose of the cars. The money will then go to the government.

StarMetro was allowed into the impound facility recently on condition that the location was kept secret. Apart from the luxury cars, a multitude of other vehicles could be seen.

The officer explained that while the ride-sharing apps were not illegal, using a private vehicle for the purpose was illegal.

“Even licensed limousines become illegal if the usage of such vehicles contravene the conditions attached to the licence,” he said.

Taxi services procured through ride-share applications are usually made up of drivers who do not have a public service vehicle (PSV) driving licence and this is an offence under the Road Transport Act 1987.

The private vehicles used by the operators of the app are also not covered under commercial vehicle insurance and do not go through Puspakom’s safety inspections.

Under the law, drivers are required to have a PSV licence and the vehicles they use must be suitably licensed by SPAD with proper insurance coverage for the protection of fare paying passengers.

Failing which, the driver risks having his car confiscated by SPAD during enforcement operations carried out by officers on top of the penalty or imprisonment as provided under the Land Public Transport Act 2010.

“We get a lot of people coming to our headquarters and begging and crying for their cars back.

“In some cases, it is their only mode of transport and there are cases of people who still have to service their loans.

“It can be very heart-breaking to see them that way, but people need to know that there are legal issues and there are risks involved when they choose to become kereta sapu drivers, but they simply choose to ignore it,” he said.