As the director/general manager of the Kuala Lumpur-based record label Laguna Music, 31-year-old Jeremy Little (aka Jeremy Ahmad Maikel), was well-respected in the Malaysian entertainment industry for signing up independent artistes such as SevenCollar T-Shirt, Estrella (which featured Liyana Fizi), Guba, Pure Vibracion and Lab The Rat. 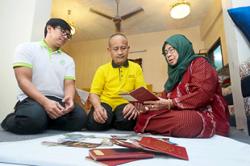 Kurdish Iraqi farmer sprouts online advice, green awareness
What does a chief resilience officer do?
How this Brazil indigenous group finds new home in search of water
Malaysian architect paints stinking toe pods and installs them in a KL park
Malaysian who helped displaced Ukrainians in Poland came away a changed man
How Malaysians are making smart green choices in their lives
How US cities are pushing the homeless to live in tent camps
From fishing to birdwatching, Gen Z is getting into nature hobbies
Malaysian DJ scales Mt Kinabalu in Iron Man suit to raise awareness on DMD
Gen Zers are embracing their 'grandma era' with knitting and herbal tea