On the anniversary of the Fukushima nuclear plant accident four years ago today, we weigh in plans for a nuclear energy programme in Malaysia.

On the anniversary of the Fukushima nuclear plant accident four years ago today, we weigh in on plans for a nuclear energy programme here.

For many years, Yumiko Sato would delight in the boxes of local fruits and vegetables sent from her grandparents, who owned a small farm and market in their home town in northern Japan. Peaches, cherries, grapes, pumpkins, cucumbers and spinach were often in those boxes.

The “fresh, tasty and nutritious produce” was synonymous with her grandparents’ home town, Fukushima, which was known for its peaches. That was until March 11, 2011. Then a tsunami tore through the area, following a huge earthquake, leaving almost 20,000 people dead or missing.

The tsunami swamped the generators of the Fukushima Daiichi Nuclear Power Plant, unleashing a new tragedy – there was an explosion, a fire and the leak of contaminated water, and then the meltdown of three nuclear reactors. 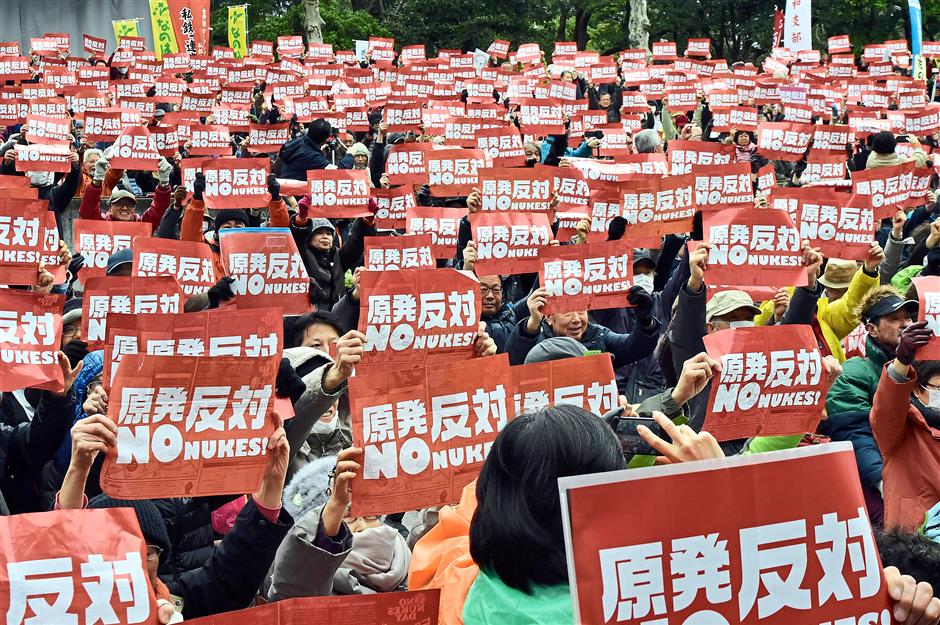 Will it work? Protestors raising anti-nuclear placards at a rally denouncing nuclear power plants in Tokyo on March 8, 2015. Thousands of people took part in the demonstration and rally ahead of the fourth anniversary of the tsunami-linked disaster at Tokyo Electric Power (Tepco) Fukushima nuclear plant. Photo: AFP

“The news reports were saying everything was under control,” Sato wrote in an e-mail. “But I felt that something was very wrong.” Eventually some 160,000 people had to be evacuated; most never returned home.

For Sato’s grandfather, the disaster was “the most shocking thing he had ever experienced, more shocking than World War II,” wrote Sato, who still has family in Fukushima.

Today, food from Fukushima raises concerns about radiation, said Sato. Some 500,000 tonnes of contaminated water still sits on the plant and contamination from leaks is a concern.

The shockwaves from the incident hit hard. In Japan, the nuclear industry has almost collapsed, with dozens of plants mothballed. Germany is phasing out its plants, as are other European countries.

Yet other countries, including China, India and Russia, are still pushing ahead with their nuclear programmes, with approximately 60 plants under construction. For countries with only a few fuel resources, nuclear energy can seem an attractive alternative. Could Malaysia be pursuing that path?

The Government’s 2010 Economic Transformation Programme clearly states the plan for nuclear energy “to meet future demand and diversify the energy mix”. Currently, the bulk of our power comes from natural gas and coal. In 2011, the Government set up the Malaysia Nuclear Power Corporation (MNPC) to implement a nuclear energy programme, with the delivery of a two-gigawatt power plant in 2021.

But how far along are we in this plan? “2021 is no longer the target date,” said Dr Mohd Zamzam Jaafar, the chief operating officer of MNPC. “We don’t know when it will be. We have to wait for the government to decide.”

The 11th Malaysia Plan, due to be tabled in June, might offer some answers.

Last year, Datuk Mah Siew Keong, a Minister in the Prime Minister’s Department, said the Government would conduct studies to assess the feasibility of building a plant. He promised to keep everything transparent. However, the disquiet is already building among anti-nuclear voices.

“I’m very concerned,” said Datuk Dr Ronald McCoy, former president of International Physicians for the Prevention of the Nuclear War (IPPNW) and the Malaysian Medical Association. McCoy wories that this would be a terribly misguided development policy.

He says: “The Government will never tell us when they will go ahead. But if they’re not going ahead, why still have MNPC?”

Cheap nuclear power is a “myth”, he said, because some costs are unaccounted for, such as the huge costs of managing waste, which can remain radioactive for thousands of years. Dozens of aged nuclear plants are now due for decommissioning, a process that is costly, hazardous and takes years. 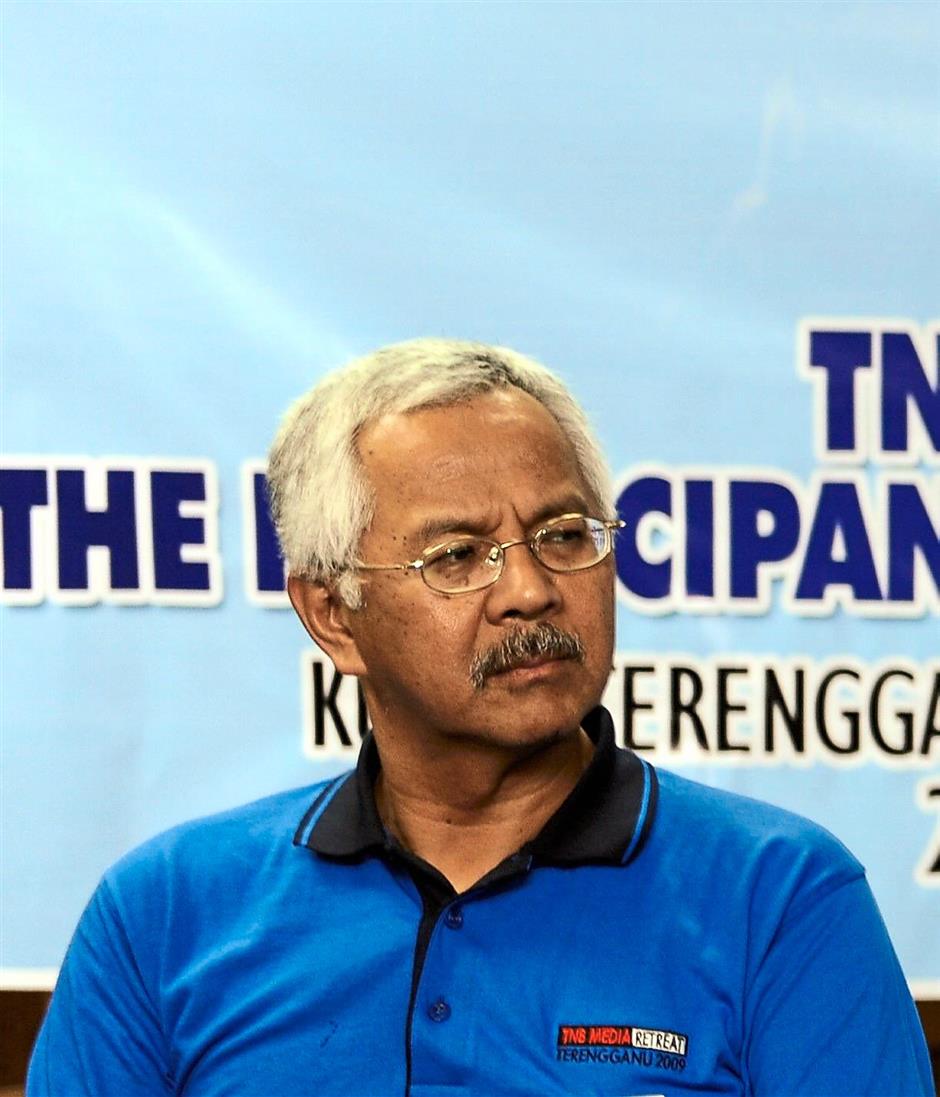 Dr Mohd Zamzam Jaafar says the country can no longer afford to ignore nuclear energy as fossil fuel prices and gas resources are volatile and face an uncertain future.

Nuclear power has always had its controversies, and also its catastrophic accidents, such as the 1986 explosion at Chernobyl, Ukraine. But in recent years, it was on an upsurge.

Not even as a “last resort” would he consider nuclear energy. “Let’s say we run out of fossil fuels. I would choose having no electricity at all rather than nuclear,” he said.

Hadi likened a nuclear plant to “having a (live) grenade in your hand — it’s safe as long as you’re steady.”

He pointed out that Malaysia did not have a culture of good maintenance, citing various disasters, such as the Terengganu stadium collapse.

So echoed environmentalist and engineer Tan Ka Kheng. Engineering practice and professionalism in Malaysia was, like the economy, at an “emerging” level. “But to run a nuclear power plant, you have to be very advanced. There are huge risks.”

In the 1980s, Tan campaigned against Asian Rare Earth, which dumped thousands of large drums of radioactive waste in Perak, some of which corroded and leaked into the environment. “In a virgin forest,” he added. “It was absolutely disgusting.”

With safety and accountability perennial issues in Malaysia, how can we consider nuclear energy? “Even Japan did not do a good job,” Tan added.

Indeed, the Japanese parliamentary panel report on the Fukushima accident said while cataclysmic events were a trigger, “It was a profoundly manmade disaster – that could and should have been foreseen and prevented.”

But what options are there besides nuclear energy? “We do have other options – renewable energy and energy efficiency,” said Zaini Abdul Wahab, an energy efficiency consultant and activist. “This would be faster, cheaper, safer and more inclusive.”

Consumers and the industrial and building sectors could all play a role. Yet scant attention has been given to these areas.

“We have no policy on energy conservation,” he said.

The lax attitude toward energy conservation results in air-conditioners running unnecessarily or at very low temperatures; lights being left on; offices left powered but not used. “Because there’s no policy, there’s no directive from the top,” he said.

The starting point should be energy conservation followed by energy efficiency measures, he said.

Some experts have estimated as much as RM7bil could be saved a year. Zaini added it was possible to have:

> Savings of 5%-10% of energy consumption from low or no-cost measures.

Such measures are standard practice elsewhere. In Singapore, plans for energy efficiency stretch up to 2050.

However, Mohd Zamzam said energy efficiency was “not so simple”. Local manufacturers were not ready to produce the most efficient goods, and imports come at a high cost, he said. Some buildings were also “too old” to meet efficiency standards.

He added the electricity tariff had been raised to promote solar energy. “We’ve used the money now,” he said. “Someone has to pay.”

But critics point out nuclear energy has unseen and immeasurable costs. In Fukushima, the costs are huge, not only because of safety. There is the human toll, of disrupted lives and lost homes.

For Sato and her family, they have lost their ancestral home.

“Some people are deeply connected to their lands ... The people of Fukushima are like that, which adds to their suffering.

“What makes this situation difficult is that it is not over,” she said in an e-mail. “We continue to worry about the effect of the nuclear disaster. Living with uncertainty is very difficult.”