The Malaysian Armed Forces and the US Navy strengthened their ties with joint naval manoeuvres last month.

LAST month, the Malaysian Armed Forces carried out the Malaysian phase of the annual Cooperation Afloat Readiness and Training (CARAT) exercise with the US Navy and the US Marines Corps in the South China Sea and on the beaches near Kuantan, Pahang. Over 2,000 military personnel from both countries were involved in the exercise.

While it was the 19th edition, this year’s CARAT (from June 17-23) was unique in that it marked the first major exercise participation in South East Asia for the US Navy’s Littoral Combat Ship (LCS) USS Freedom, which had arrived in Singapore on April 18 as part of an eight month deployment to the region.

CARAT is a series of bilateral military exercises between the US Navy and the armed forces of Bangladesh, Brunei, Cambodia, Indonesia, Malaysia, the Philippines, Singapore, Thailand and Timor Leste.

Rear Admiral Jeffery Harley, commander, Amphibious Force US 7th Fleet, who was overseeing US forces in the CARAT Malaysia exercise said that the LCS would be participating in a number of other exercises in the region as part of the US strategy of rebalancing in the Asia Pacific.

“It is a great ship, it gives us an enormous capability and an extraordinary future as well,” said Harley.

USS Freedom was joined by the guided missile destroyer USS Curtis Wilbur, the dock landing ship USS Tortuga (with an embarked US Marine Corps Landing Force) and the diving and salvage ship USNS Safeguard with an embarked Mobile Diving and Salvage Unit.

A US Navy P-3 Orion, Seabees from the US Navy Construction battalion and US military medical personnel also took part in the extensive exercise. 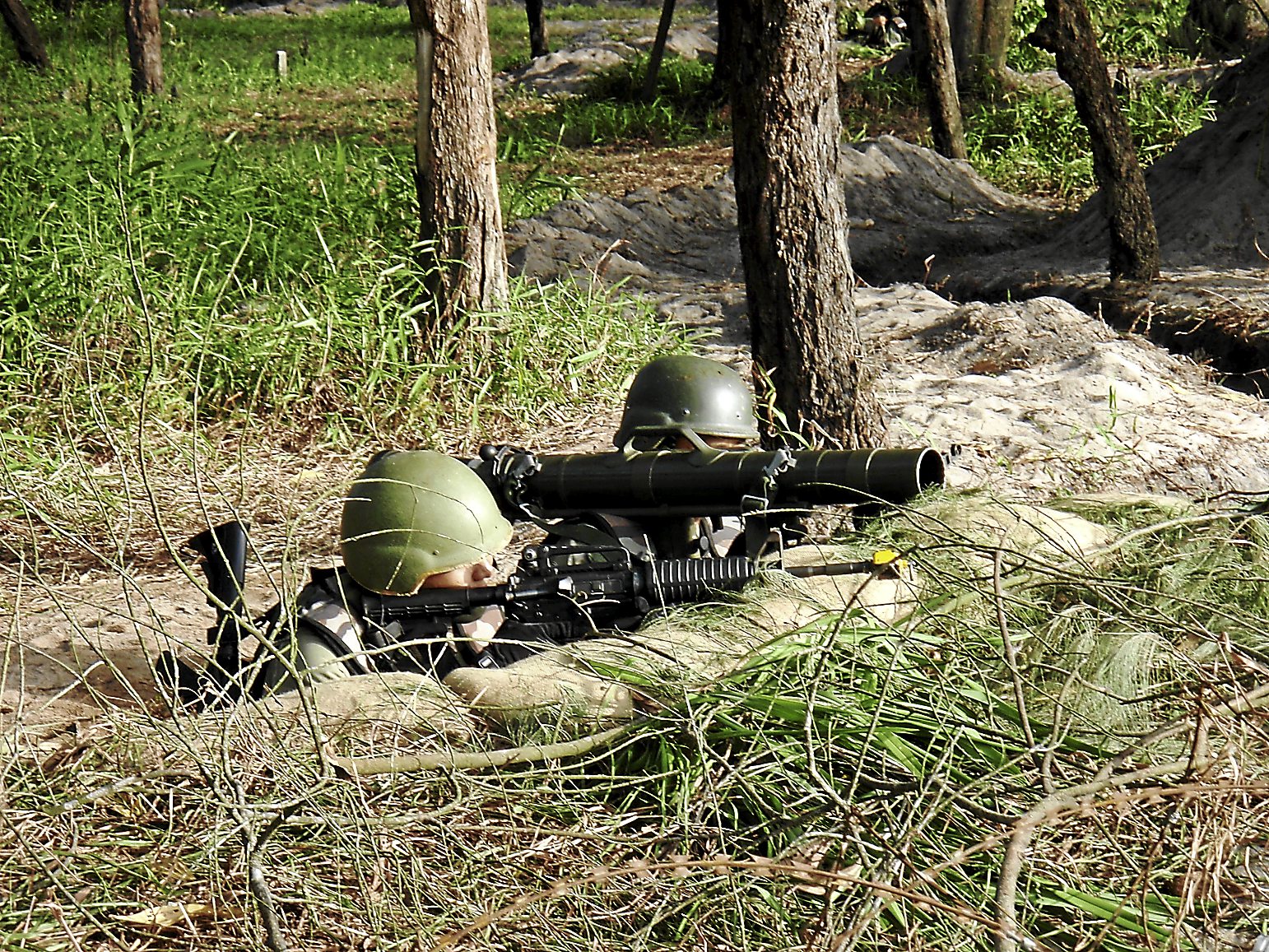 Throughout the exercise period, the Malaysian and US forces conducted a wide variety of activities.

The list of joint military training included sea manoeuvres, amphibious landings and VBSS (visit, board, search and seizure), diving and salvage training, medical training and civic and community outreach programmes. The building of a community centre for local fishermen and musical performances by the US 7th Fleet Band was part of the outreach.

The highlights of the CARAT exercise though was the participation of the USS Freedom and the two-day amphibious raid exercise (June 20-21). From ship to shore, the Malaysian Paratroopers and US Marines secure the Nenasi beachhead.

During the exercises, the USS Freedom demonstrated its capabilities and versatility in operations. The shallow draft of the ship enabling it to easily berth within RMN Kuantan naval base in contrast to other larger and deeper draft US Navy ships. The ship’s unique dock – well at rear for its Rigid Hull Inflatable Boat (RHIB) – allows it to swiftly deploy the RHIB in contrast to conventional ships which have to lower their boats via winches into the water.

The larger size of the Freedom’s RHIBs (compared to other ships) gave it an edge in dispatching larger boarding teams in VBSS operations. The USS Freedom took part in both the sea and amphibious raid phases of the exercise – the ship and its MH-60 helicopter supporting the combined Malaysian paratroopers and US Marines assault force.

The USS Freedom attracted great interest from Malaysian Armed Forces personnel with the Freedom’s crew more than willing to show them the ship’s capabilities.

“We had more visitors than I expected, with people showing up for impromptu tours, and they got to see how US Navy ships and sailors operate, it was a unique experience and I really enjoyed that,” said Commander Timothy Wilke, the Freedom’s commanding officer. 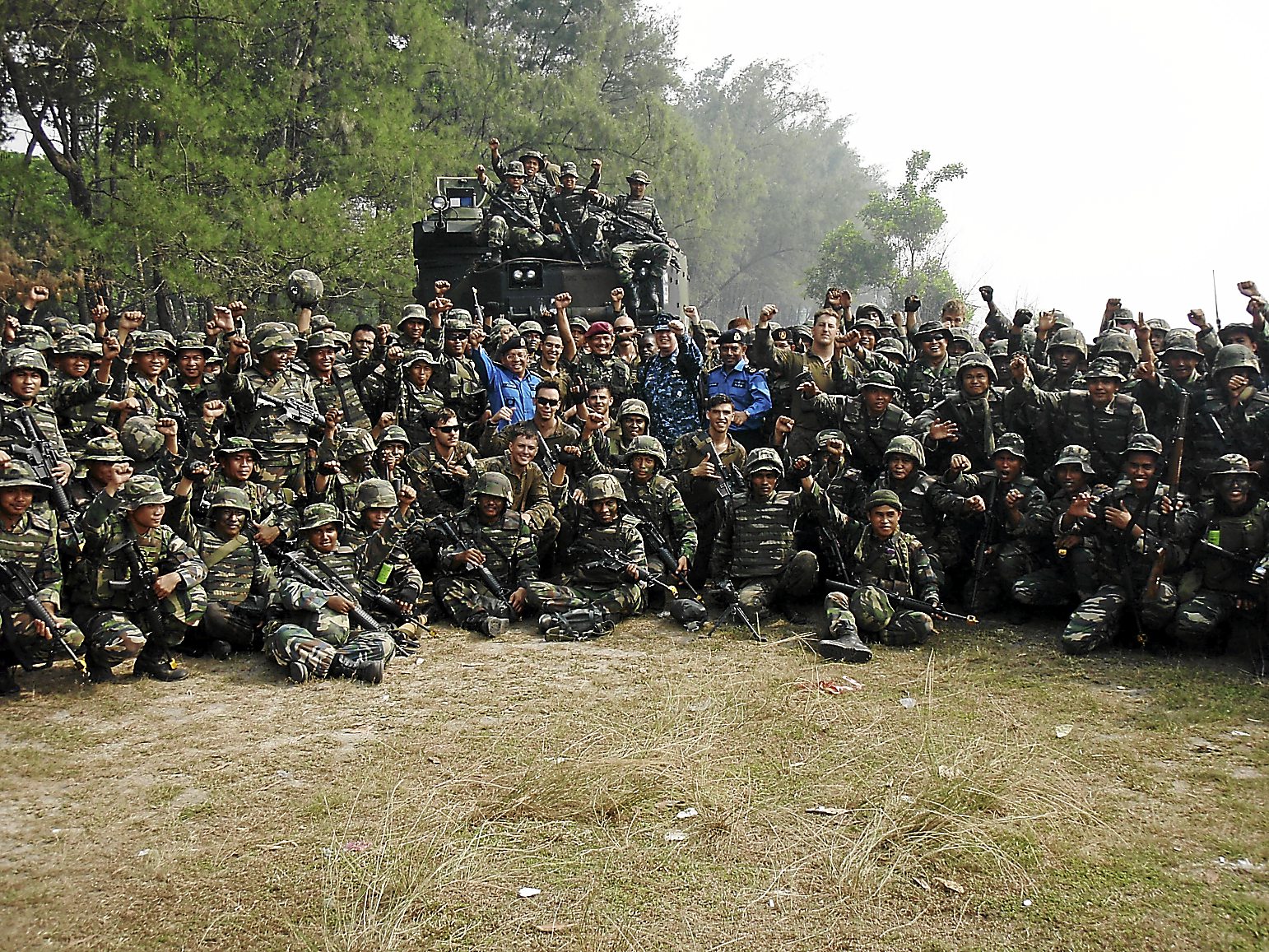 Brigadier General Datuk Tengku Ahmad Noor Tuan Chik, Commander 10th Parachute brigade (centre in maroon beret) and US Rear Admiral Jeffery Harley (beside him) celebrate the end of the exercise with the soldiers involved in it.

Elsewhere, an amphibious raid, involving a beach landing at Nenasi, near Pekan, Pahang, saw a combined force of 200 soldiers, comprising Malaysian paratroopers from the 8th Battalion Royal Ranger Regiment (Para) and US Marines from the 3rd Battalion, 3rd Marine Regiment, embarking on this exercise.

US Marines AAV-7 amphibious assault vehicles were used to dispatch the troups.

The 9th Royal Malay Regiment (Para) played the opposition force. Also involved in the beach landing were four Sukhoi Su-30MKMs and four Bae Hawks of the RMAF which carried out simulated airstrikes on the beach.

Brigadier General Datuk Tengku Ahmad Noor Tuan Chik, commander of the 10th Parachute brigade, the parent formation of the two Malaysian parachute battalions involved, said, “It was a good exercise, especially to my paratroopers and a great opportunity for my soldiers, allowing us to share experiences and work together with US forces.”

The writer would like to thank Lt. Cmdr Clay Doss, US Navy and Lt. Cmdr Mohd Rizaudin Abd Rani, Royal Malaysian Navy, for all media assistance and support provided to him for the CARAT exercise.