As the brand evolved and to address consumer needs, they recently introduced a new navigation system where products are categorised according to skincare concerns. A customer can spend anything between RM200 and RM300 to get started on his own makeup set from M.A.C Cosmetics. Men are more knowledgeable and more aware of what they want out of their skincare.

Ladies, do not be surprised if the next time you go shopping with your boyfriends or husbands they end up spending more on make-up than you.

And this global phenomenon is also taking place right here in Malaysia.

But men are not just dropping money on shaving and grooming items, they are also investing in eyebrow pencils, concealers and foundation.

Fashion icon Tom Ford who launched his own line of men’s make-up last year said he uses a bronzer every day to give him that tanned look.

Ford added that men who do not know if they should use make-up should get a magnifying mirror and look at their face. If they have capillaries,pale or sallow skin or dry skin, then they should fix it.

“It started with movie stars, but more men are now open to the idea of using make-up to enhance their complexion,” he added.

Although men have been using make-up since the time of Alexander the Great — who is said to have been very fond of grooming, make-up and aromatics — the idea only became mainstream in the modern world with the rise of South Korean boy bands. 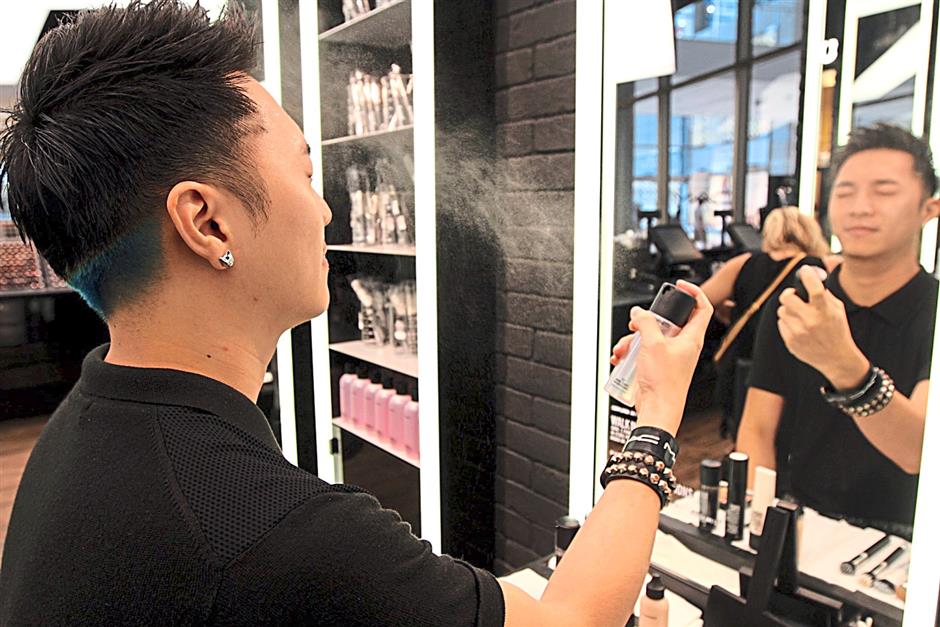 Men are more knowledgeable and more aware of what they want out of their skincare.

According to Korea Times, members of K-pop boy bands Infinite and BEAST are rarely seen on stage without a little eye shadow and liner. In a survey of 2,880 users of the Clio brand of make-up, BEAST member Lee Gi-kwang placed second among male celebrities who looked best wearing eye liner.

The trend can also be seen in the west. American singer and songwriter Adam Lambert who won second place on the eighth season of American Idol in 2009 is almost as well known for his use of make-up as he is for his singing.

Lambert has confessed to moisturising, concealing, powdering and even using eyeliner or as men’s makeup marketeers call it — guyliner. Besides Lambert and every other South Korean boyband, Hollywood hunks such as Johnny Depp, Dave Navarro and Dwayne Wade all use some form of makeup.

“Previously, guys were brought into our store by their female partners, but now they are coming on their own to get what they want. They are well aware of what their skin needs thanks to all the information out there,” said Chong.

“Our male customers range from young 20-year-olds who are starting to explore the working world to 40-year-old CEOs who want to look fresh even after a long day at the office,” he said.

A customer can spend anything between RM200 and RM300 to get started on his own make-up set from MAC Cosmetics. And business must be good for the unisex brand as they plan to open three more stores by end of the year.

“It is all about being confident,” said MAC Cosmetics senior PR and artist relations manager Sonia Chong Sim Yee.

“The sophisticated man takes how he looks seriously and cosmetics are there to help him look his best,” she said.

More than a blusher

With men becoming more self conscious these days, men’s skincare brands such as Lab Series are also benefiting from the rising demand.

Lab Series Skincare For Men was first launched in Malaysia in 1987. The brand was re-launched in April 2006 with a new look and with the objective of introducing a convenient color-coded system broken down into categories to assist men navigate their skincare regime.

As the brand evolved to address consumer needs, they recently introduced a new navigation system where products are categorised according to skincare concerns.

Brand general manager Michael Liew explained that the growth in awareness for men’s products over the last three years has enabled more brands and products to be introduced into the Malaysian market.

“Men are more knowledgeable and more aware of what they want out of their skincare. For example, in Lab Series, we now categorise our products according to skincare concerns, making it easier for men to address their skincare requirements,” he said.

It may be a while until a Malaysian man openly admits that he is using make-up, but with brand marketers at work , we can expect more Malaysian men trying out Lab Series’ BB and CC creams. Packaging that resembles cigar boxes or liquor bottles and branding that refers to products as “urban camouflage” are also aimed at getting more men to try using make-up.

According to Chong, on average 20 to 30 men walk into their stores a month looking for something that will enhance their look and this number is expected to rise over the next five years.

Men’s make-up may not be for everyone, but major brands such as MAC and Lab Series consider it important enough not to ignore.

With the female make-up market already mature, the attention is on men. With Hollywood’s leading men owning up to using makeup, maybe someday soonwe will see more ordinary men using a brow liner.