WITH 1,093 US patents in his name, Thomas Alva Edison is known as one of the most prolific inventors of his time.

Famous for saying, “I have not failed. I’ve just found 10,000 ways that won’t work”, Edison revolutionised various industries with his inventions, from the electric light to telecommunications.

Today, Australian inventor, scientist, and serial entrepreneur Kia Silverbrook is following Edison’s footsteps and is known as a leading inventor, having 4,665 US utility patents and internationally, 9,874 patents.

Patents are just one form of intellectual property (IP), which include copyright, trademarks, industrial design rights and in some jurisdictions, trade secrets.

Apart from protection from IP infringements, registered IP can also be used to gain financing or investments.

Working on closing the gap for financing issues faced by local companies, the Intellectual Property Financing Scheme (IPFS) was introduced in Budget 2013 to facilitate the use of intellectual property rights (IPR) as collateral in funding technology companies. 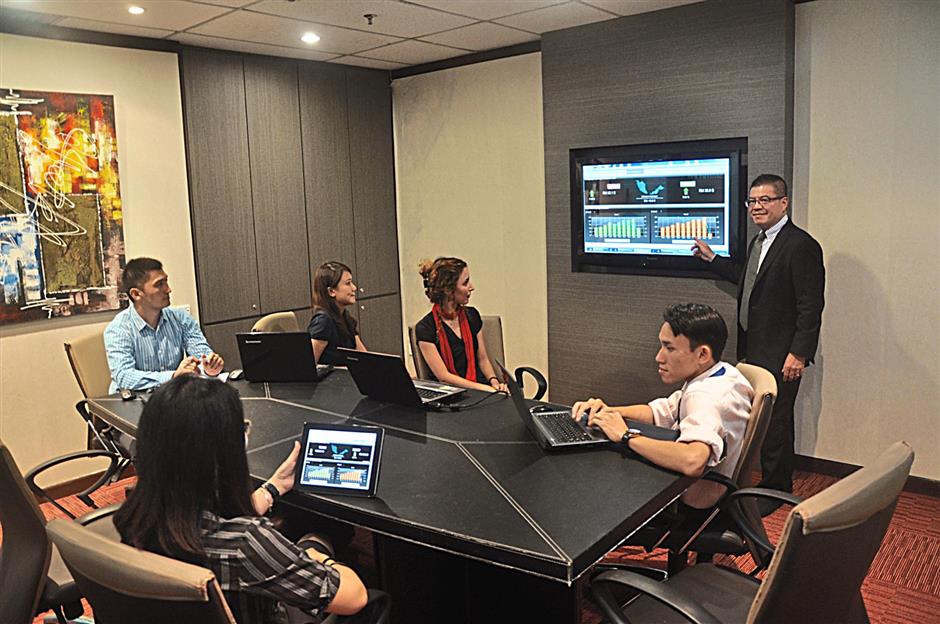 Ting brainstorming with his research and development team at their office in Wisma UOA II, Jln Pinang.

“Becoming a high-income nation requires focusing on high-income industries. Depending on existing industries, such as manufacturing, will not take us there. In most high-income nations, it is technology companies that are able to create high-income jobs,” Malaysia Debt Ventures Bhd (MDV) managing director and chief executive officer Datuk Md Zubir Ansori Yahaya tells Metrobiz. Stressing on the need for a change in mindsets, Md Zubir said, in 2002, MDV began financing information and communication technology companies when commercial banks saw them as high risk.

Now, the company is progressing to helping technology companies secure financing by using their IP as collateral.

“Most of the applicants for IP registration are research companies or research institutions. Many do not know the value of their IP, whereas in other countries, many mergers and acquisitions take place due to the value of IP,” he said.

The ICT and biotech industry financier had allocated RM200mil from its existing funds to finance tech companies, while Finance Ministry is providing a 2% interest rate subsidy and a guarantee of 50% of the financing as incentive under the scheme.

The scheme allows companies to leverage their IPRs to secure financing of up to RM10mil, or 80% of the value of their IPR, whichever is lower, for a five-year period.

Under Budget 2013, the Government allocated RM19mil to Intellectual Property Corp of Malaysia (MyIPO).

Zubir said out of the 23 IP related companies which participated in three months of training for IP valuers since March last year, organised by the local IP administrator, only seven qualified. Of the seven, one is from MDV.

“In property valuation there is no shortage of qualified valuers capable of providing tangible valuations. IP valuations are more complicated and needs better appreciation of the potential value as IP is intangible in nature,” he said.

For consistency in valuing these intangible assets, the Intellectual Property Valuation Model was launched by the Domestic Trade, Cooperatives and Consumerism Ministry in November last year.

As part of the RM19mil allocated to MyIPO, an IPR market platform as well as new training courses for IP evaluators will be carried out.

In this regard, the Government had mandated MyIPO to drive the IP valuation initiatives, which currently focus on four deliverables: training of local IP valuers, the valuation of IP rights for suitable local SMEs, developing a national IP valuation model and creating an IP market platform for IP rights to be transacted.

MDV is targetting more than 30 companies in the biotechnology, film, and ICT sectors.

Md Zubir says that one of the prerequisites for the companies is to have registered IP, which can be in the form of a patent, trademarks, design, copyright and others.

The valuation model of the IP is then based on several methodologies, such as the development cost, income method and the future-earnings method.

However, he reiterated that the valuation is not for SMEs to sell their IP, but rather to give a value to it so it can become collateral to secure financing to develop new IP or other new projects.

“After doing the necessary due diligence, the IP then serves as a collateral to MDV,” he said.

Since its formation in 2002, MDV has approved about RM6.4bil worth of projects and disbursed RM7.83bil as of December 2013.

Without a track record, SMEs face difficulties in obtaining loans. Even if loans are granted, the interest rates can go as high 10%.

The interest rates for MDV’s financing ranges from 7.25% to 9.75% depending on the risk profiling. Getting funding from a conventional financier may lead to pledging properties as collateral.

“For banks, one of the most important questions is how to recoup the loan in the event of default. We view it differently. Right from the start, we have enough confidence that the SME will find ways to make their business a success,” Md Zubir said.

To facilitate the realisation of value from the IP-based collateral, he said an IP exchange will be formed by the third quarter of next year.

Md Zubir says this allows companies to place IP in a market place, similar to a stock exchange. This will help address the concerns of banks regarding the value of IPl.

“MyIPO will be going to regions that are active in the IP-related market, including China and the European Union to observe how their markets perform,” he said.

“The challenge is not in the duration taken for evaluation and approval, but rather the time taken in registering the IP at the initial stage. Some of the applicants reviewed are in the process of getting their IPRs, or having their IPRs being valued by an IP valuer” he said.

KRU Studios executive president Norman Abdul Halim says it was not easy in the beginning to get funding via the Intellectual Property Financing Scheme despite having a good track record with MDV, which funded the studio’s animated movie Ribbit.

The 3D movie had to go through a long process for its IP valuation so it could be used as collateral.

The evaluation was conducted by a foreign IP specialist appointed by MyIPO.

The hope is that valuation periods will be shortened with more evaluators being trained.

KRU Studios was formed in 1992 and produces creative content such as feature films, television shows animation, and music.

Having registered its first IP in 1994 for musical works, Norman said most of the company’s IP are registered in Malaysia and a few in the US.

“IP funding is needed in the media and entertainment industry. Even though it is common source of funding in developed nations, unfortunately commercial banks in Malaysia do not understand and appreciate the value of IP.

“With the changes to the landscape, I hope the days when content creators had to mortgage their houses just to finance their next project will become a thing of the past,” he says.

On preparing for the length of time it takes to have a patent granted, Jimmy Ting, managing director of Datamicron Systems Sdn Bhd, another recipient of MDV funding, says the company registered its patent for methods and the process of navigation for dashboards in US, Europe and China in 2006. The patent was only granted in March last year in China.

“If IP involves international patents, it probably takes years to get it granted,” he says.

Ting said the MDV funding will be used for new R&D initiatives.