It had on Thursday ordered to strike off Tan, if he was still a registered person of Bursa Malaysia Securities.

(CIMB) and its call warrants.

Bursa Securities said Tan was then a dealer’s representative of HwangDBS Investment Bank Bhd in Penang.

“Tan had engaged in numerous manipulative/false dealing activities as well as failed to act honestly, fairly and observe standards of integrity in undertaking dealing activities in the investment account of HDBS over a period of approximately nine months for he had through his managing/operating of HDBS’ account as well as the trading accounts of his family members (his sister and mother) maintained at another broking firm,” it said.

Bursa Securities said Tan executed on-market pre-arranged cross trades in the securities of 8 counters by entering/matching the opposing orders in HDBS’ account with the online trades of his family members.

“These cross trading activities were undertaken by Tan with dishonest intent to benefit his family members by ensuring profitable trades in their accounts to the detriment of HDBS’ account which suffered losses arising from these trades,” said the regulator.

Bursa Securities said Tan executed artificial buy orders by entering multiple orders in another three counters on several trading days which were repeatedly modified/amended including increasing the order size of these buy orders so as to lose/lower priority whenever these buy orders moved into priority queue.

These artificial buy orders were subsequently cancelled/withdrawn which indicated that they were not intended to be traded (Artificial Buy Orders).

Tan had  also  facilitated the disposals of related structured warrants in his mother’s account by engaging in order book manipulation in the underlying shares of four counters.

Bursa Securities said Tan entered a series of small quantity buy orders at various price levels at/near limit up price (towards the end of pre-opening phase) which caused the best bid of the underlying shares to move up to the limit up price.

“The selling of the related structured warrants in Tan’s mother’s account were done at the selling price desired by Tan through his order book manipulation and this had enabled significant profits being made in his mother’s account,” it said. 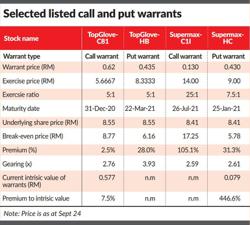