According to officials, the bank’s board had considered Hamidy’s request to resign.

“It is with deep regret that the board has agreed to accept his resignation. The board would like to express its appreciation to Hamidy for his leadership and contribution to the bank since March 21, 2013 and wishes him well in his future endeavours.”

Pending approval by Bank Negara on the appointment of a new CEO, KFH said its board had appointed Datuk Mohamad Aslam Khan Gulam Hassan, who is currently the chief recovery officer, as the acting CEO, effective today.

“The board and management of the bank wish to assure all clients and business partners that the bank shall continue to serve them with the same dedication and excellent service.”

KFH also said it had appointed Mohammed Nasser Al Fouzan as chairman of the board of directors, effective yesterday.

“Al Fouzan has over 28 years of experience in the banking industry. He was the chief retail banking officer at Kuwait Finance House K.S.C. in Kuwait, where he served the banking group for 18 years, prior to this appointment.”

Hamidy, a banker with 30 years of experience in the financial industry, took the reins from Datuk Jamelah Jamaluddin on March 21 last year. He was given a three-year contract.

Jamelah took over the reins as CEO in February 2010 from Datuk Salman Younis, who had been CEO since its inception in 2005. 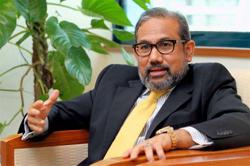