Selangor imposes restrictions on foreigners buying properties in some districts

PETALING JAYA: Developers and property agents were thrown into a flux last week over a new set of guidelines on property purchases in Selangor by foreigners, permanent residents (PR) and foreign companies.

Generally, the new guidelines restrict foreigners from buying all types of properties costing less than RM2mil in most of the districts inthestate.

Previously,the cap was set at RM1mil,as announced during last October’s budget. Some property developers are still in the dark over the matter while others are coming to grips with the significance of the move’s effectin an already slowing market.

The measures, outlined in a circular dated Aug 28, were effective from Sept 1 this year. The circular was signed by Department of Lands and Mines Selangor director Datuk Kamarulzaman Jamil.

According to the new guideines, residential, commercial and industrial properties are divided into three zones.

The minimum price for purchases by foreigners is based on the zones.

Foreigners, PR holders and foreign companies are only permitted to buy residential properties that are priced at a minimum RM2mil for Zone 1 and 2, and a minimum threshold of RM1mil for those located in zone 3, according to the circular.

Zone one encompasses the districts of Petaling, Gombak, Hulu Langat, Sepang and Klang.

Zone two are Kuala Selangor and Kuala Langat while the districts under zone three are Hulu Selangor and Sabak Bernam.

Besides increasing the minimum threshold, the land office permits foreigners, PR holders and foreign companies to buy strata and landed strata properties only.

“The new guidelines have raised the threshold price considerably besides putting up new barriers on the type of properties they can buy,” a developer said. 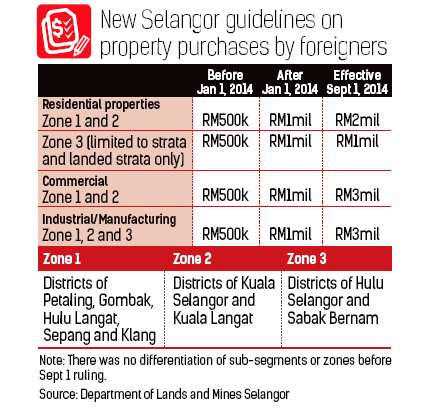 In the commercial and industrial sub-segments,they are only permitted to buy propertiespricedRM3mil andabove locatedinallthe three zones.

They are barred from buying properties set aside for bumiputras. As for non-bumiputra units, they can buy not more than 10% of those units.

They are to buy directly from the developers and not from the secondary market and are eligible to buy one residential unit only per family.

“This means the state of Selangor is going the way of Johor. Land is a state matter. While the Federal Government may propose its policies – unveiled during each budget – the individual states can go along with the measures proposed, or they can propose their own measures,” a source said.

“We saw the state authorities in Johor proposing their own rules with regard to land issues a few months after Budget 2014. We now see Selangor doing the same,” the source added.

The property source said that the Aug 28 circular seemed to be “a preemptive measure” to prevent foreign developers from entering the state in a big way.