Overall view of construction of the tanks at the Pengerang Deep water Petroleum Terminal. 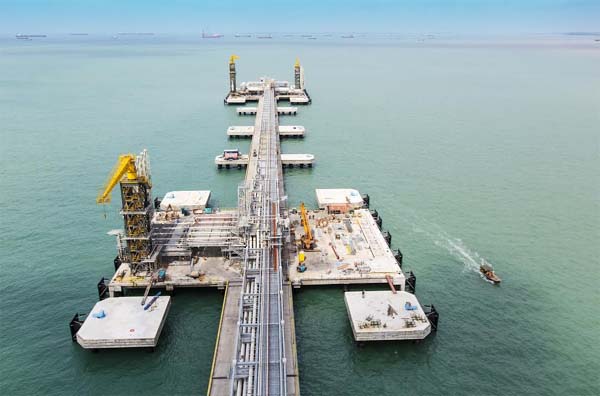 Overall view of construction of the jetty structure at the Pengerang Deep water Petroleum Terminal.

HOW many of us set out to achieve the impossible? This involves goals that seem too difficult to conquer but could bring us great benefit if we manage to pull through and get to the finishing line.

Back in June 2010, we held a lab to determine the way forward for the oil, gas and energy sector under the Economic Transformation Programme (ETP). One of the ideas mooted then was for us to build a regional oil and gas hub in south Johor by developing the Pengerang Integrated Petroleum Complex (PIPC).

Subsequently, more than 13,000 people who attended the ETP Open Days following the conclusion of the lab in 2010 told us they felt this would be good for the country.

But that was all it was in 2010 – an idea. If we were going to do this, we would have to start from scratch.

A few weeks ago, I had the opportunity to visit Pengerang. It was both humbling and really amazing to see how an idea that seemed so remote four years ago can take shape when you have all the right ingredients. Here, the private sector, the Government and the people are working hand in hand to build a project which will eventually be a game changer in the way we use our petroleum products to capture the most value from it.

But first, a little bit about PIPC itself. This project is one of the more important components of our programme to transform Malaysia into the ranks of a developed country by 2020 – achieving a per capita income of US$15,000 from US$6,700 in 2009. That effectively means an annual increase in gross national income per capita of at least 6% a year from 2009.

To facilitate this growth in income, we have identified 12 growth areas to spearhead rapid economic development. Oil, gas and energy is one of these areas. We want to continue with domestic oil and gas production, grow in downstream ventures and make Malaysia the No. 1 hub for oil field services while exploring alternative energy sources.

Pengerang is a key and vital part of this thrust. It will help to create an oil storage and trading hub and increase petrochemical output.

This will be done first by building a deep-water jetty and storage facilities to accommodate the inflow of raw materials to processing plants and the subsequent outflow of the products to destinations within and outside the country.

What is already happening is that the deep-water jetty and oil and petrochemical storage tanks are already being developed. Meanwhile, Petronas’ Refinery and Petrochemicals Integrated Development is showing good progress on the ground.

Pengerang currently has RM69bil worth of projects in the pipeline. This accounts for 33% of investment costs of all our entry point projects and nearly 70% of those in the oil, gas and energy sector. These will serve as catalysts for economic growth and development in selected areas. Ultimate investment over time could be as high as RM170bil, including the committed RM69bil.

Using just committed investment figures, we estimate that the PIPC will contribute RM18.3bil to 2020 gross national income and create 8,600 jobs. The eventual income could be higher depending on how well catalytic efforts work.

Now for some progress updates. For the Pengerang deep-water petroleum terminal, Phase 1 of the project work started in early 2011, with 500 acres of sea area to be reclaimed. Current engineering, procurement, construction and commissioning works is at 92% as at Feb 25. This includes dredging and reclamation, marine facilities (for example jetty construction) and tank terminal construction.

Phase 1, which is on 150 acres of reclaimed land, will have a storage capacity of 1.3 million cu m of petroleum products. First oil commissioning will be in the first half of this year.

Admittedly, there have been delays but a few months is not a lot in the overall scheme of things for a project this complex which requires substantial attention to infrastructure needs that have to be set up from scratch, as well as requirements of residents already in the affected areas.

There are 30 separate infrastructure and public amenities projects currently being implemented. They include the upgrading of the existing dual-lane single carriageway to dual lane and the construction of a new dual-lane carriageway.

At the same time, a temporary road will be constructed to facilitate project development. The new roads are expected to be completed by mid-2016.

For water supply, a new dam with 88 km of pipelines will be constructed to provide raw water for the PIPC. The target completion for this is by the first quarter of 2016. This dam will supply the project itself as well as provide additional raw water resources for general use in Johor.

We are mindful that community sensitivities must be dealt with utmost care and attention. There are six villages involved in relocation to new resettlement areas under Phase 1 of the PIPC.

The relocation will be in phases and villages involved are Kg Sungai Kapal, Kampung Langkah Baik, Kampung Teluk Empang, Kg Jawa, Kg Batu Mas and Kg Sebong. Relocation is expected to start this month. A total of 948 houses have been built in a new 387-acre resettlement area known as Taman Bayu Damai.

Also about 3,000 graves, including Muslim and Chinese cemeteries, will be relocated in phases with more than 1,400 having already been relocated so far.

Pengerang is a project that requires the cooperation and collaboration of federal and state authorities, government corporations and the private sector.

There is a specific body to monitor the PIPC development, the Johor Petroleum Development Corp. The board of directors for this body is jointly chaired by the Johor Mentri Besar Datuk Seri Mohamed Khaled Nordin and myself.

The Government is fully committed to the development of PIPC, which will not only result in an integrated petroleum production complex with all attendant infrastructure in place but will provide facilities and incentives for the physical and financial trading of oil for greater value added to the economy.

This will help push us towards the best possible use of our resources by creating maximum linkages through the entire value-added process from upstream production to downstream processing, as well as trading activities.

Datuk Seri Idris Jala is CEO of Pemandu, the Performance Management and Delivery Unit, and Minister in the Prime Minister’s Department. Fair and reasonable comments are most welcome at idrisjala@pemandu.gov.my)