By WONG WEI-SHEN and ZAZALI MUSA

The extra property supply would not pose an issue if foreign developers were attracting foreign buyers rather than targeting only domestic buyers.

THE property market in Johor, particularly Iskandar Malaysia, might be a case of too much too soon.

Red flags are showing in the state where launches of projects and high prices are common place but the pace of launches, which now includes “carpet building” by China developers, is flooding the market with more houses than what could be sustainable.

Latest data by the National Property Information Centre (Napic) indicate the amount of new homes being built in the near future is equivalent to 42% of the stock of 702,101 houses in the state.

Almost 300,000 near homes are being built or in the planning stage at a time when the market in Johor has hit a soft patch.

Napic data shows that at the third quarter of last year, construction for 116,859 homes had already started while the building of 162,579 homes have yet to start.

Meanwhile, 16,168 homes had been approved for construction in Johor in that quarter alone.

Analysts say the new supply does not include new launches by Iskandar Waterfront Holdings Bhd, which is expected to increase three-fold to more than 4,000 units and is expected to remain elevated up to 2017.

The supply of new homes does not seem to be putting a lid on the escalation of home prices in the state. As the new launches are priced thereabouts or even higher than what is being sold in the more established Klang Valley, the new supply of homes and their higher prices have had a telling impact on prices in the state.

Given there is going to be an oversupply of homes in Johor, a slew of launches by China-based developers recently has got some worried. 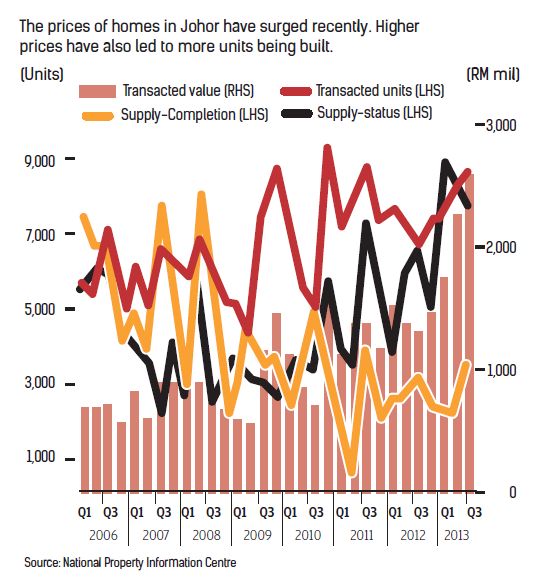 ny with the launch of 9,000 apartment units at one go, causing local players to keep a close watch on how they will impact the market there.

Koh believes the magnitude and scale of such launches could lead to a property bubble if foreign developers are given a free hand in their development projects.

Rehda is hoping for the state government to possibly impose regulations that limit the number of units built within a year to match the market’s demands, says Koh.

Hwang-DBS Vickers Research says Country Garden’s 9,000 units launch at-one-go in Danga Bay alone could cause a glut, although delivery could be challenging given tight building material and labour supply over the next three to four years.

Analysts are concerned that these developers would replicate the ghost towns in China and if overbuilding does occur in Iskandar, that can be detrimental to the overall physical market in the mid-term.

However, some property experts say the extra supply would not pose an issue if foreign developers were attracting foreign buyers, rather than targeting only domestic buyers.

Country Garden, which has impressively sold about 70% of its Danga Bay maiden project in Malaysia, launched in August, told StarBizWeek in an email reply that some 3,000 units were snapped up by Malaysians.

Meanwhile, about 50% of its foreign buyers are Singaporean and 45% are Chinese.

Most of its units were snapped up within a month.

Then there is Hong Kong-listed Guangzhou R&F Properties Co Ltd, which recently bought 116 acres in Johor Baru from the Sultan of Johor for RM4.5bil. Market talk is that a 19-block development is in the blueprint.

But according to its filing to the Hong Kong exchange, Guangzhou R&F plans to develop high-rise residential units, low-density housing, retail properties, offices, hotel and a shopping mall, all of which will be on a saleable floor area of about 3.5 million sq m. That’s almost 10 times the floor space of the Petronas Twin Towers in Kuala Lumpur.

Also, Hao Yuan Investment Pte Ltd, which is believed to be a China-linked company registered in Singapore, is entering into a joint venture with Iskandar Waterfront Holdings to develop 15ha in Danga Bay.

Not all are alarmed by the entry of China developers. 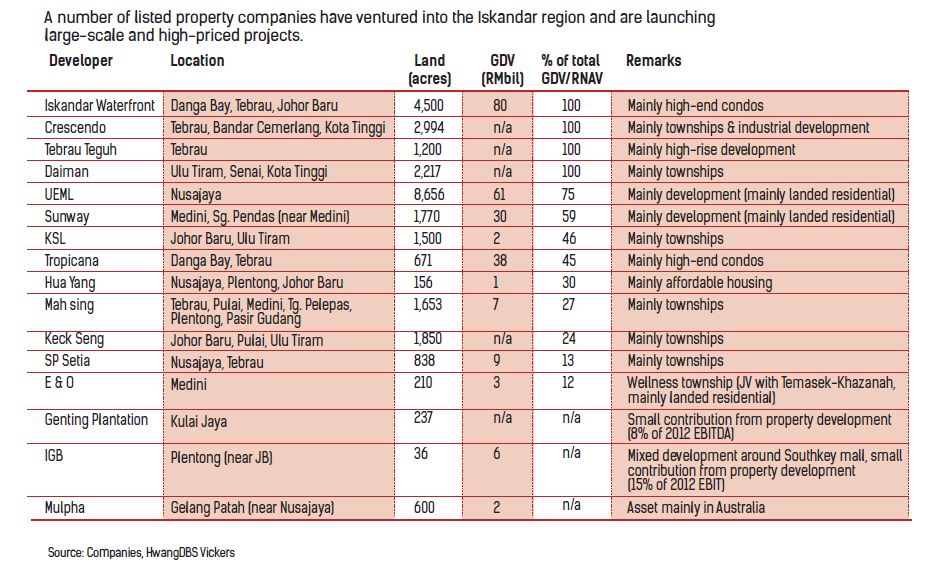 “The sprouting of Chinese investors in Malaysia is in tandem with the Government’s initiative to make Malaysia an international real estate investment destination. Chinese developers have been investing in blue chip locations of New York, Los Angeles, London, Sydney, Singapore and their presence in Malaysia bodes well for the market,” says Zerin Properties chief executive officer Previn Singhe.

Previn is unperturbed on the potential flooding of homes in the future as the supply coming in will be spread over a couple of years. “Once all the catalytic projects are in place, there would be requirements for new homes to accommodate migrations,” he says.

Although rumour has it that Country Garden has been offering its Chinese buyers a deal that packages a unit in Iskandar together with a purchase of their property in China, it is insignificant to pushing up prices in the area, says V. Sivadas, executive director of PA International Property Consultants Sdn Bhd.

As local and foreign developers grapple and challenge for customers when launching projects in Iskandar Malaysia, the surge in supply coming in has been startling.

The slew of houses slated to be built together with a market that is taking a breather after seeing a uprush in prices and cooling measures starting to bite has seen takeup rates of new developments almost grind to a halt.

recording only 20% in bookings for its latest project Almas @ Puteri Harbour which is a mixed development of retail office and residential components.

The project comprises of 526 units.

“In any case, competition in a growing market such as Iskandar Malaysia, is a good thing – it keeps all of us on our toes and ensures that property buyers have a wide variety of products to choose from.

As we all strive to improve, greater value will be created for our customers, investors and end users,” says Eco World Development Group Bhd

However, this year could look bleak for developers as they are bogged down with a decline in sentiment brought about by the cooling measures such as the increase in real property gains tax, as well as the abolishment of the developers interest bearing scheme, introduced in the latest budget.

Also, policies such as the change of the weekend differing from Kuala Lumpur and Singapore has caused a negative knee-jerk reaction, resulting in many developers and buyers adopting a wait-and-see attitude.

While many still believe in the Iskandar story, the success of it will largely depend on the movement of international businesses setting up shop in the area, which is reliant on how fast infrastructure there improves, which experts say has not really kicked off as yet.