Our writer experiences elation and elevation after surviving the aerial acrobatics of vertical flying, 360° flips and downward dives – without throwing up.

HAVE you flown before?” pilot assistant Doug Field asked, just before I was to board the Extra EA-300L acrobatic plane.

I hesitated for a moment, because while I have indeed flown before, I didn’t think he meant regular commercial flights.

I had actually once flown on a trainer – the type of aircraft used to teach student pilots – on an assignment years ago, but that was nothing like what this flight was going to be like.

In conjunction with the launch of the 2014 Red Bull Air Race World Championships recently, Star2 had been invited for a special flight experience. We were to go up, one by one, with Red Bull Head of Aviation Sergio Plá, in a light two-seater plane, and experience some aerial acrobatics.

Earlier on in the day, we had a taste of what we would be going through when veteran Hungarian acrobatic pilot Peter Besenyei took to the skies above the Putrajaya Maritime Centre during the launch.

Besenyei made a dramatic entrance by flying underneath the Seri Gemilang Bridge near the centre, zooming through a very tight space where one small mistake would mean crashing either into the bridge or Putrajaya lake.

He then proceeded to do a number of aerial acrobatics, including 360° flips, flying upside-down, vertical flying, vertical climbs and downward dives, among others. This was the same plane I would later be sitting in! 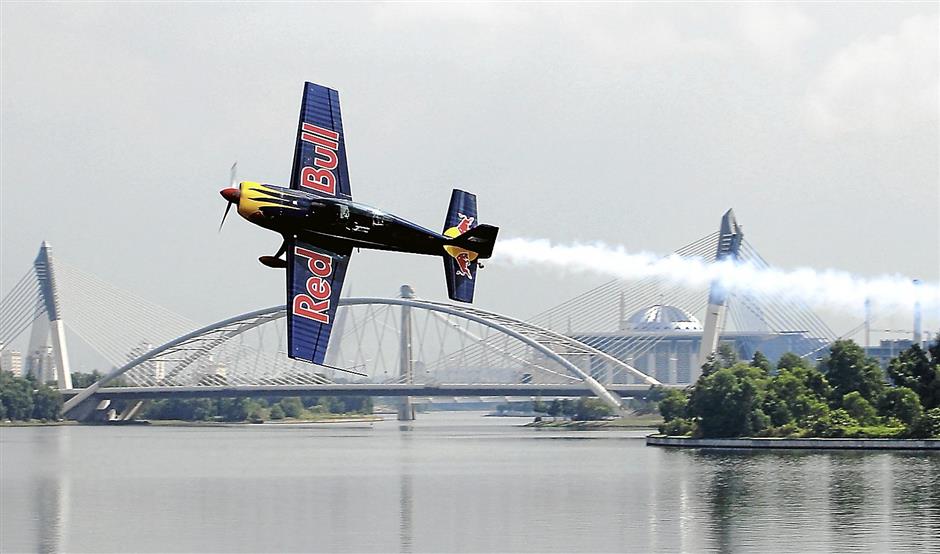 Quite a few of those who knew I was scheduled to go up on a similar flight later asked if I was freaked out after that display.

Strangely, I wasn’t, even though I’m no daredevil by a long stretch. I put it down to the fact that there is a certain calmness to be had once you relinquish control and firmly decide to just trust your life to another’s hands.

In this case, the hands of Sergio Plá, who apart from being in charge of planning the Air Race, is also a former member of the Spanish Aerobatics Unlimited Team with over 4,000 hours of flight time under his belt.

The afternoon was hot and sunny, with a few fluffy cumulus clouds hanging around the sky.

We were taking off from Subang Airpark, sharing the runway with Firefly Airlines – one of whose planes took off just before my flight – and field and flight technical manager Lance Winter was in charge of my pre-flight preparations, which mainly consisted of fitting my parachute on and buckling me in. 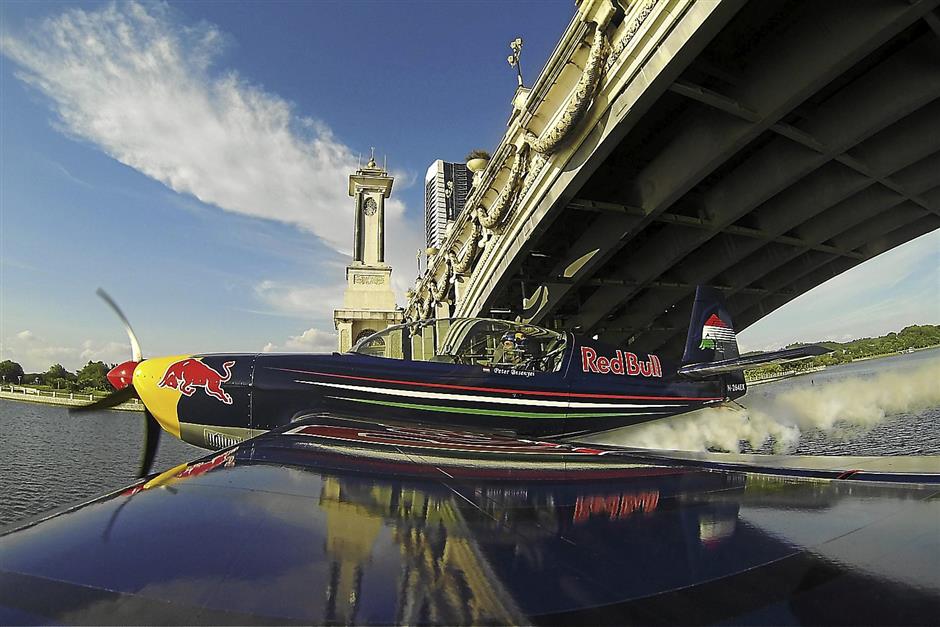 One small mistake could be fatal, as Hungarian Peter Besenyei flies under the Seri Gemilang bridge of Putrajaya.

My idea of a parachute pack was something like a backpack, but what I got that day was thinner and longer – extending to cover my butt – and secured across the shoulders, chest and thighs, with some serious carabiner clips. Winter quickly briefed me on how to deploy the parachute if needed – basically, a strong tug on one particular clip located on my upper left chest.

Then, it was time to climb onboard.

Climbing into the passenger seat, which is located in front, was easy enough. The tricky part was adjusting my legs to accommodate the flight control stick between them – and that thing had quite a wide angle of rotation – as well as placing my feet such that they didn’t push on the foot controls directly in front of them.

As the controls are linked to Plá’s in the back seat, and any pressure or manipulation on my part could affect the plane’s flight, it was important I didn’t touch anything – but hey relax, no pressure ya!

After finally settling on a more-or-less comfortable position, all I had to do was sit still and let Winter fix up the safety belts around me. The tightness was particularly important as I would be suspended from the seat during the upside-down manoeuvres. 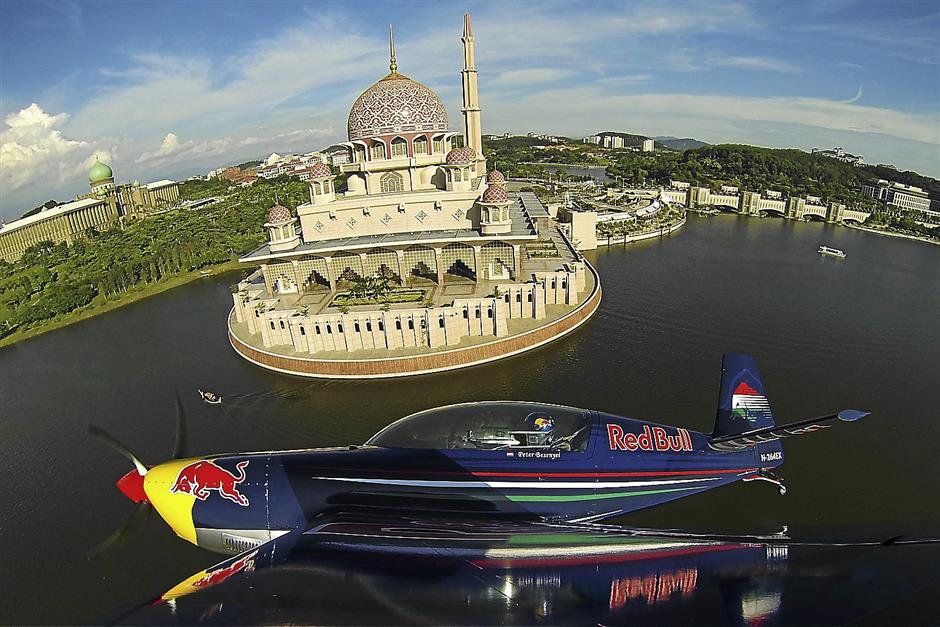 Peter Besenyei puts the stunt plane through a demo around Putrajaya.

Winter then pointed out the two small black clasps that would instantly release me from the belts in the event that Plá was to yell, “Bail out! Bail out! Bail out!” He added that it would also be advisable to yank out the two wires connecting my flying cap to the headphone and microphone outlets, if I had to abandon the plane, although he said that they would probably come out by themselves.

At that point, I was thinking to myself that in such a situation, it would only be by God’s good grace if I could actually remember the safety belts and parachute procedures, much less worry about a couple of wires!

Then, Field came up with my extremely unfashionable flying cap, which reminded me exactly of the cap Peanuts cartoon character Snoopy wears when he is pretending to be a World War One flying ace.

Lastly, I was presented with a barf bag, “just in case,” Field said with a smile, as he tucked it under one of my numerous straps.

As he climbed onboard behind me, Plá warned me to let him know the minute I felt even slightly sick, as the plane ride back would take about six minutes.

Then he smiled and told me, “Just relax and enjoy the flight.”

Stunts in the sky

Our flight path took us out over Shah Alam and Klang, to the islands just off Port Klang. The coastline was a bright shining silver, while the land beneath us was an interesting mixture of the busy hive of human habitation and industry, ugly bare ground, and dense bright greenery. 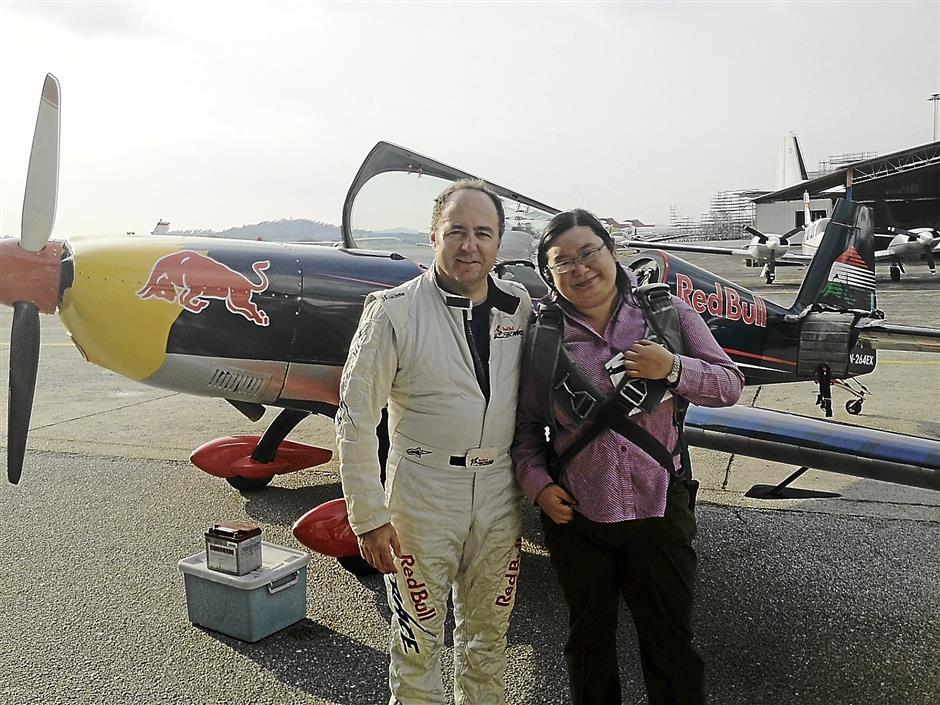 Sergio Plá (left) and Tan Shiow Chin at Subang Airpark after the flight.

Although I had the flight cap with the headphones on, I couldn’t make out what Plá was occasionally saying to me, as the transmission was too soft, and the sound of the rushing wind in the cockpit too loud. All I could do was give him a thumbs up to indicate I was all right whenever I heard his indistinct voice. Fortunately, he never had to tell me to bail out!

That also meant that any tricks he did came rather as a surprise.

He started out with some “knife-edge” or vertical flying, where he tilted the plane until the wings were perpendicular to the ground.

Presumably after seeing I was fine, he went on to do a few 360° flips. It was rather strange and quite exhilarating to be suspended upside down for that second or two during the manoeuvre.

But that was nothing compared to the main stunt he put the plane through, once we were out over the islands. The plane went into a vertical upward climb, with a view of the infinitely blue sky greeting my eyes, even as the G-force (acceleration felt as weight) pressed me back against my seat. 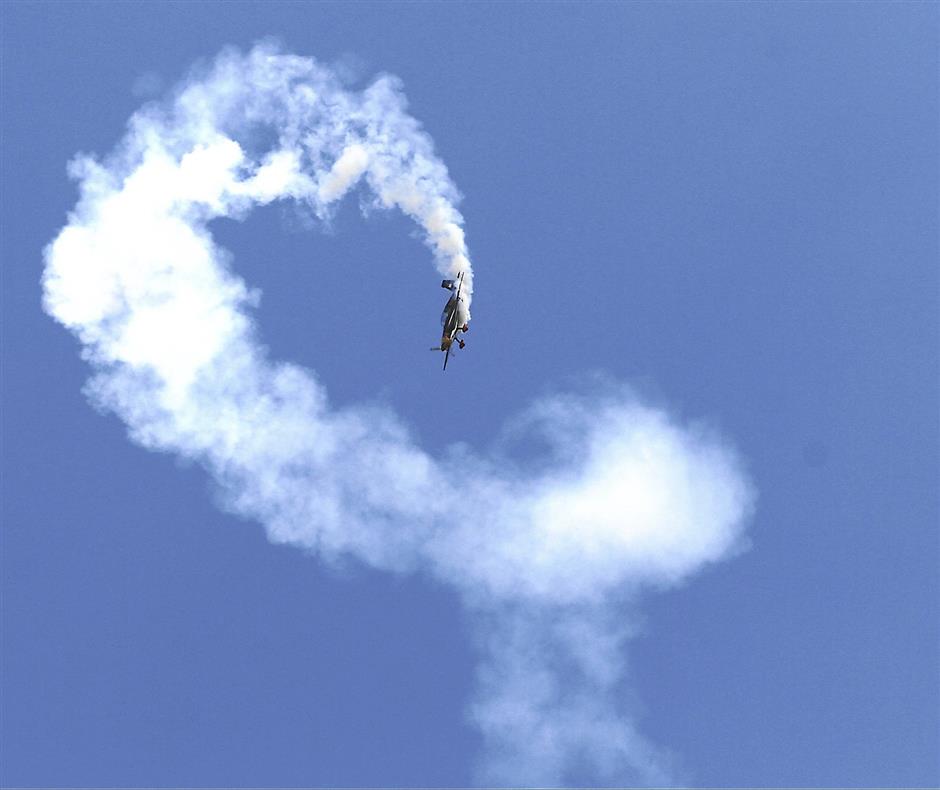 Fancy a ride? Our writer survived 360 ° loops like this!

Then, abruptly, there was a sense of weightlessness as Plá allowed the plane to spiral into a fall back down toward the earth. The strangely-hypnotic bright green of the islands filled the cockpit as he guided the plane into a downward dive, before eventually levelling it out.

At that point, I truly understood why some people yearn so much for the freedom of the air. I felt a oneness with the plane, like it was an extension of my body, and a sense that I could do anything I wanted – loop the loop, flip round and round, reach upwards towards space or dive down to the ground – in the unrestricted space of the sky.

Of course, that was just an illusion, helped along by the fact that I didn’t actually have to think of all the factors that go into piloting, like altitude, speed, air traffic, limitations of the plane, and other such mundane, but crucial matters.

The flight lasted longer than I thought it would, not that I was complaining; even just having the opportunity to observe the ground from the 180° transparent cockpit cover and comparatively lower altitude was wonderful.

After landing, my legs did feel slightly rubbery as I climbed out of my seat. But after happily not throwing up during the flight, I wasn’t about to show any weakness by asking for help getting out of the plane.

In a mundane sense, you could consider the experience a tick off my bucket list, but I’ll also never forget that incredible sense of freedom and defiance of gravity that flight afforded me.