Spoilt for choice: The 15 decks of the Mariner Of The Seas offer a whole range of activities to keep guests of all ages happy from start to end.

This is a primer for anyone who has not been on a cruise before. According to the writer, there’s never a dull moment!

I AM the kind of person who gets nauseous watching 3D movies, or those with shaky-camera movements. I can’t read or text on my mobile phone while in a moving car or train. And if I’m in the passenger seat and we are driving uphill, the driver needs to drive really, really slowly or risk having to do some massive cleaning up in the car later.

So, I was initially a little worried about the idea of spending eight days “stuck” on a cruise ship. It was to be my very first cruise. What if I got seasick? Luckily, my mother, who also suffers from the same condition and who came along with me on the cruise, had brought along a seasickness prevention kit – stocked with everything from pills to wristbands.

But after doing a quick Google search on the Royal Caribbean’s magnificent Mariner Of The Seas, I felt better because such a huge ship was unlikely to make me seasick, surely?

As it turned out, I was right. Even for such a motion sickness-prone person as me, the experience on board was nothing short of amazing. The only time I ever felt slightly seasick was when I was sitting by the glass windows in the dining area which overlooks the sea.

Speaking of the dining area, the food served on the ship was the highlight of my entire experience. The Singaporean “uncle” I met during check-in said it was his second time on the Mariner Of The Seas. And then his eyes lit up as he said: “Oh, I come here mainly for the food-lah ... it’s very good!”

They serve a massive buffet spread for breakfast, lunch and dinner at the Windjammer Café on the ship’s 11th deck. There’s amazing variety, from Western-style salads, mashed potatoes burgers and baked pastas to Indian briyani, fish and chicken curry, and mouth-wateringly good desserts (with different varieties each day).

Food and beverage director Christophe Poitevin said the food served onboard is specially created depending on the guests’ nationalities.

“This time, we had an international crowd, so we had to customise the menu to suit our guests,” he said.

Poitevin, who is from France, manages 650 staff members – that’s more than half of the ship’s 1,200-strong workforce. Sporty types can choose rock climbing, basketball or the mini-golf.

According to executive chef Kenneth Johansen, the most popular dish, on any of their cruises, is always the seafood.

“Seafood is always a winner, anywhere in the world – whether in China, the United States or in Europe,” said Johansen, who has been with the company for over 11 years.

The best thing about the food onboard is that almost everything is free, apart from the alcohol in the bars and the food offered by a few specialty restaurants.

There is another café on the fifth deck, called the Café Promenade (open 24 hours), which serves delicious pizzas, sandwiches, pastries and cakes. I’ll never forget that glorious, melt-in-your-mouth cheesecake stick. So if you oversleep and miss dinner, you can grab something from here, anytime. It is located in the Royal Promenade area, which is the shopping street where high-end stores like Coach and Michael Kors are situated, with the items sold at duty-free prices. This is also where, every day, heavily discounted designer items are displayed, including perfumes, watches and handbags; discounts of 50% and 70% make you want to surrender your entire life savings to them.

Of course, payment on board the ship is all done electronically – they do not accept cash at all – so you can just swipe your room keycard to pay for items. When you check in, you are given the option of linking your room keycard to your credit card, to save you the hassle of queuing up to pay for all your purchases on the last day. A brilliant and really convenient move.

Every night, you are pampered with fine dining, with a personal waiter and waitress at your beck and call in a huge, magnificent dining area.

There were two “formal nights” during my stay, for which guests were required to dress in their finest for dinner. The stateroom for two.

How do you know when formal night is? Every night, the room attendant leaves the Cruise Compass for the next day in your room. The compass states every single activity lined up for the next day, with the venue and time, so you can plan your activities for the entire day.

It tells you where the parties and dance classes are, what time you can go rock-climbing, for a massage or yoga, attend a health talk, where you can go to play Sudoku or Bingo or what movies are playing for the day. Yes, they have cinemas on board the ship – and the screenings are all free of charge. There are also spectacular ice-skating, comedy and magic shows. 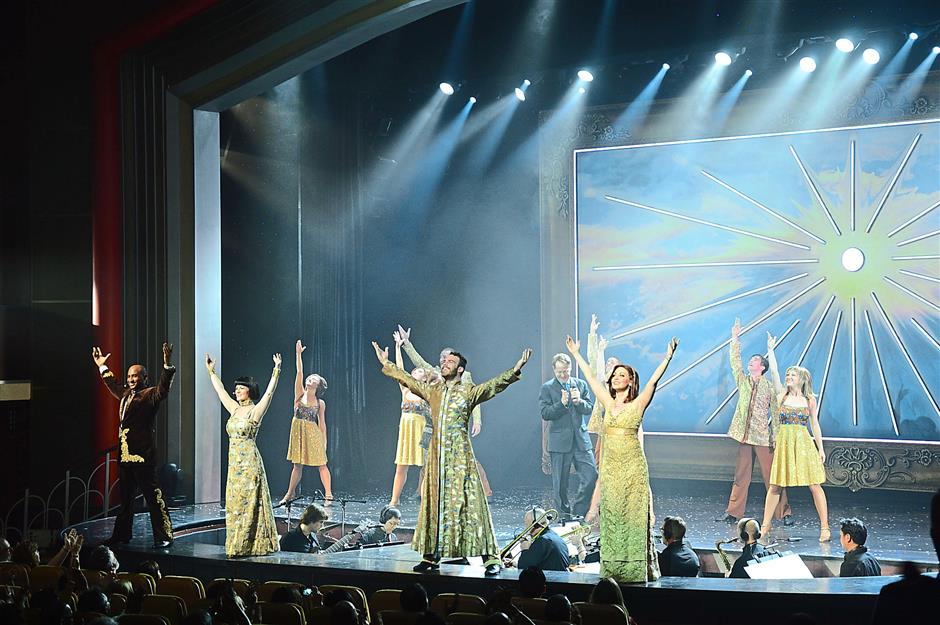 A stunning stage performance on board the Mariner of the Seas.

The compass also tells you the location of the ship, the temperature, and a detailed account of everything happening on the ship for the day.

In fact, there were so many things to do that I felt eight days were not enough. And I had initially been worried that I would be bored “stuck out at sea” for the duration. Guests helping themselves to the buffet onboard the Mariner of the Seas.

I went rock-climbing, and to the gym (which has really impressive facilities), and I partied and danced every night and made new friends.

There was a Battle Of The Sexes Game Show, for which there was a “disclaimer” stating it is rated 13PG and that only those who are “not easily offended” should participate. And we soon found out why: Participants, who were divided into six groups, were asked to be the fastest to find all sorts of items, from dentures to undergarments, in order to win the game.

The game had the audience in stitches from the beginning to the very end as we watched the unsuspecting male volunteers having to put on lipstick, women’s clothes and strut their stuff in high heels.

There was a belly-flop competition, too, in which volunteers were asked to show their ability to fall flat into the pool – and were judged by how big a splash they caused and how painful it looked. 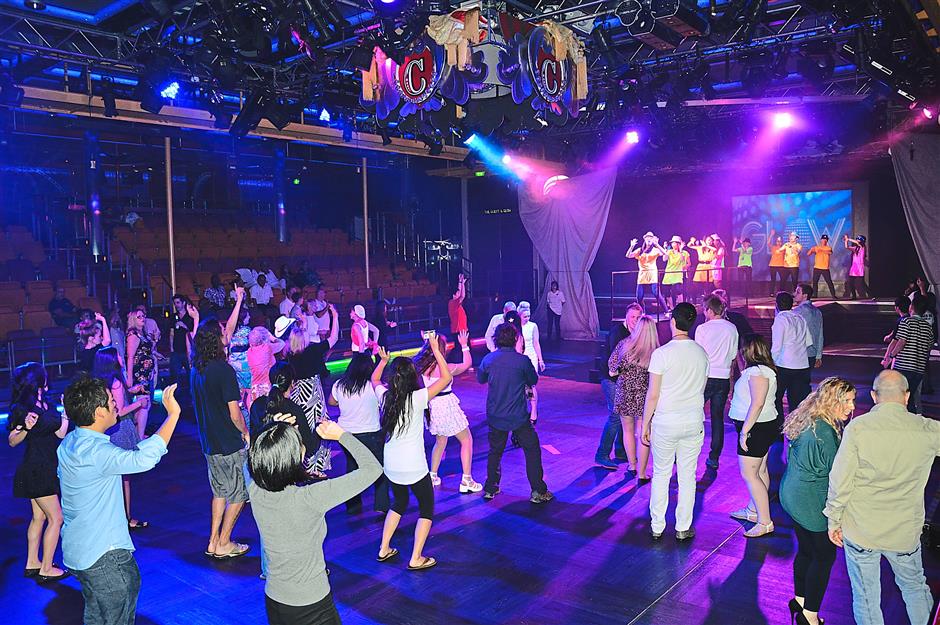 Then there was the Sexiest Man Alive competition, in which men of all shapes and sizes were randomly pulled in and asked to do a catwalk, dance and impress the female judges.

The participants, especially the winner – a large African man – became instant “celebrities” onboard.

The real superstar, however, is the cruise director known as Dan Dan Mian. He is former deejay Dan Whitney, an American, who says he adopted the name – which means “spicy egg noodle dish” in Mandarin – to appeal to the largely Chinese-speaking crowd on the ship’s Asian routes.

Whitney, with his magnetic personality, wit and charm, was always the life of the party and a big hit with the guests. He hosted all the major parties on the ship, the game shows, made all the announcements, hosted the trivia sessions – he was everywhere.

There were also guests who spent all day, and all night, in only one place – the Casino Royale – coming out only to eat or to return to their rooms to sleep.

A Malaysian woman, whom I had dinner with one day, was shocked to learn that I had not stepped into the casino, six days into the cruise.

“You never went there? Then what do you do the whole day, every day?” she asked, shocked.

There really is something for everyone on that huge, magnificent ship. For the ones who seek a relaxing holiday with just food and sun-bathing – there is the 11th deck where visitors can just lie by the pool all day, in the shade or under the sun.

For those who love to dance and party, there are parties every night, by the pool and indoors – with different themes every night like the GLOW dance party where the staff is decked out in glow-in–the-dark outfits, and the Farewell rock ’n’ roll dance party on the final night.

For fitness lovers, there is the gym, rock-climbing, roller-skating, basketball and even mini golf. And those in need of some pampering can opt for the spa treatments and massages, for a fee.

There are also a video game arcade and a library. There are just so many things to do. Of course, there are days when the ship is docked so guests can go out and explore the city; they just have to make sure they return to the ship at the stipulated time.

The route that I went on started in Shanghai, went to Xiamen, Hong Kong and Vietnam, and ended in Singapore. Visitors can opt to purchase the tour packages from the Shore Excursions counter for a hassle-free visit to all these places.

Another thing that remains etched in my mind is how friendly and accommodating the cruise staff members were. They come from 55 different nations and they work three months non-stop, after which they take a two-month break to spend time with family and loved ones.

Yet they always wore a smile, were welcoming and asking everyone how their day had been. You feel welcomed, like you are among friends.