One day to fall in love with gritty Dhaka

Evenings are the best time to hire a wooden boat and take a gentle ride down the city's main waterway, the Buriganga River, where daily life can be seen in all its gritty charm.

Despite its gritty appearance and unbridled urban chaos, one day in Bangladesh’s bustling capital Dhaka is all it takes to fall in love with this city by the Buriganga River.

Dhaka is a city full of fairytales. A veritable energy-sapping urbs primus where tales of both horror and splendour are played out frequently – and most entertainingly, may I add.

Hansel And Gretel takes the form of the posse of young schoolchildren that can be seen peeking out of the many cage-like bicycle-driven contraptions that ferry them to and fro. Beauty And The Beast is a tale recreated by the doe-eyed, olive-skinned girl riding her scooter, almost asphyxiating on the noxious emissions of the colourful buses recklessly plying the Bangladeshi capital’s dusty streets.

As for me, I was the protagonist in my very own male version of Alice In Wonderland. Though the day I landed in Dhaka it seemed more like “Malice in Blunderland” as I stood in an excruciatingly long line, snaking its way towards the sole immigration officer at the city’s air conditioner-bereft Hazrat Shahjalal International Airport. 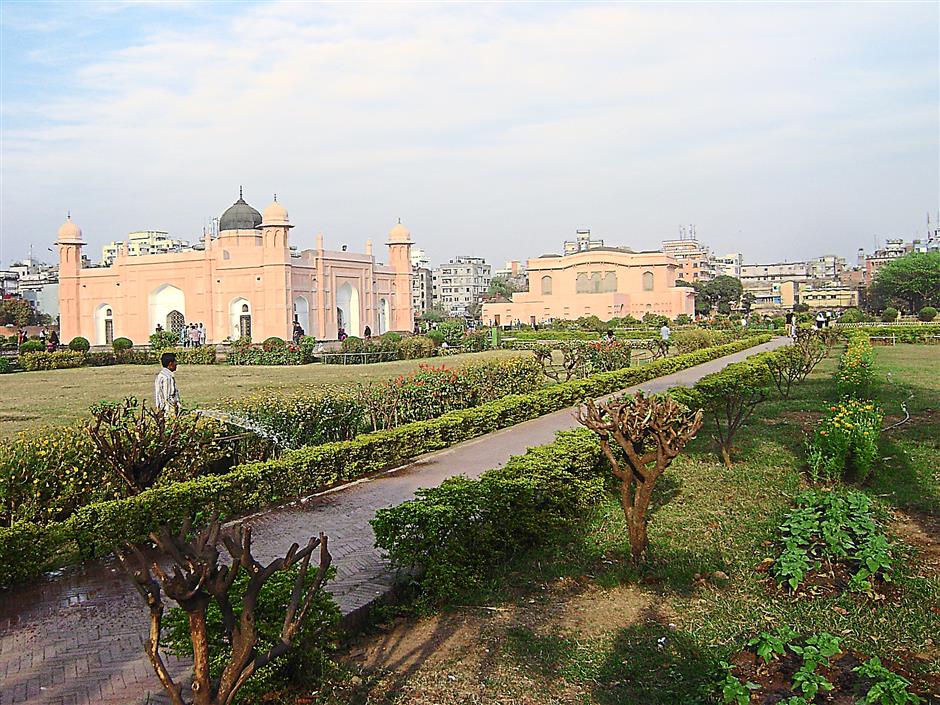 The unfinished Lalbagh Fort is a great place to spend the evening lost in Mughal-inspired architecture and well-manicured lawns.

“Why Dhaka?” aforementioned immigration officer asks me with raised eyebrows and a perceptible frown pat in place. A simple, yet loaded, two-word question chased by an expression almost identical to the ones I’d encountered and got used to in the weeks building up to my debut trip to Dhaka. Friends, family and colleagues – all failing to understand why any “tourist” would want to visit a city like Dhaka.

But ask true blue, card-carrying members of the “traveller’” brigade “why Dhaka?” and they, like me, will serve you with a volley of reasons to partake in Dhaka’s story. And what a finely nuanced tale this city by the Buriganga River has to tell. A tale that has all the trappings of a blockbuster and a tale that you can have play out however you want it to.

A Tryst With The Old

Start your Dhaka story by taking in the lost splendour of Old Dhaka on foot – the best way to explore this compact precinct of the city! Topping your agenda should be a visit to the pink-hued Ahsan Manzil nestled at the top end of a busy alley.

This 144-year-old edifice was the official residential palace and seat of the Dhaka Nawab family; today, it has been converted into a museum with all the familial regalia on full display. 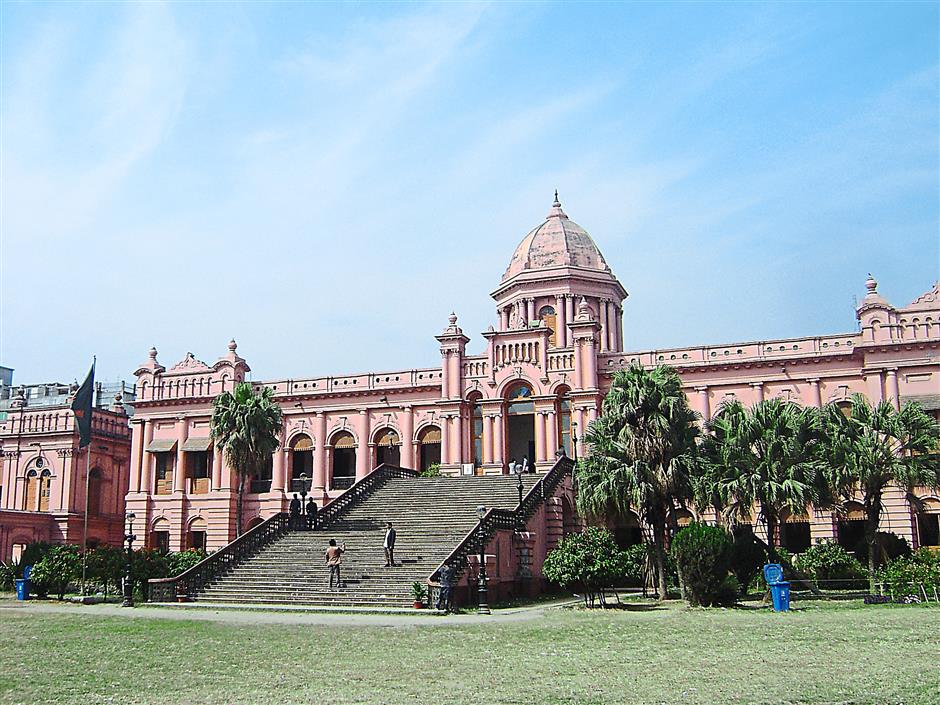 One of the most picturesque sights in the city is this pink 144-year-old Ahsan Manzil building in Old Dhaka. It was once the official residential palace and seat of the Dhaka Nawab family. Today, it is a museum.

Thanks to a tip, I sauntered down to the serene Armenian Church in the Armanitola area of this part of Dhaka where you can still see old gravestones inscribed with traditional Armenian script and let its peaceful energy seep into you (normally it is not open to the public but, for a little “consideration”, the caretaker can do so).

Just a mere 300m north of the church, you will find the Sitara Mosque that is distinct in that its four domes are entirely decorated with mosaic tiled stars. So iconic is this mosque that it even finds a place of glory for itself on the face of a 100 Bangladeshi Taka bank note.

Round off your blast from the past with a walk to the magnificent 17th century Lalbagh Fort that is famous for being unfinished after it was allegedly cursed. It houses the very beautiful Tomb of Pari Bibi, the daughter of the warrior-king Shaista Khan that is in the middle of the complex, flanked on either side by the Diwani-i-Aam hammam and the Lalbagh Fort Mosque on the eastern side. 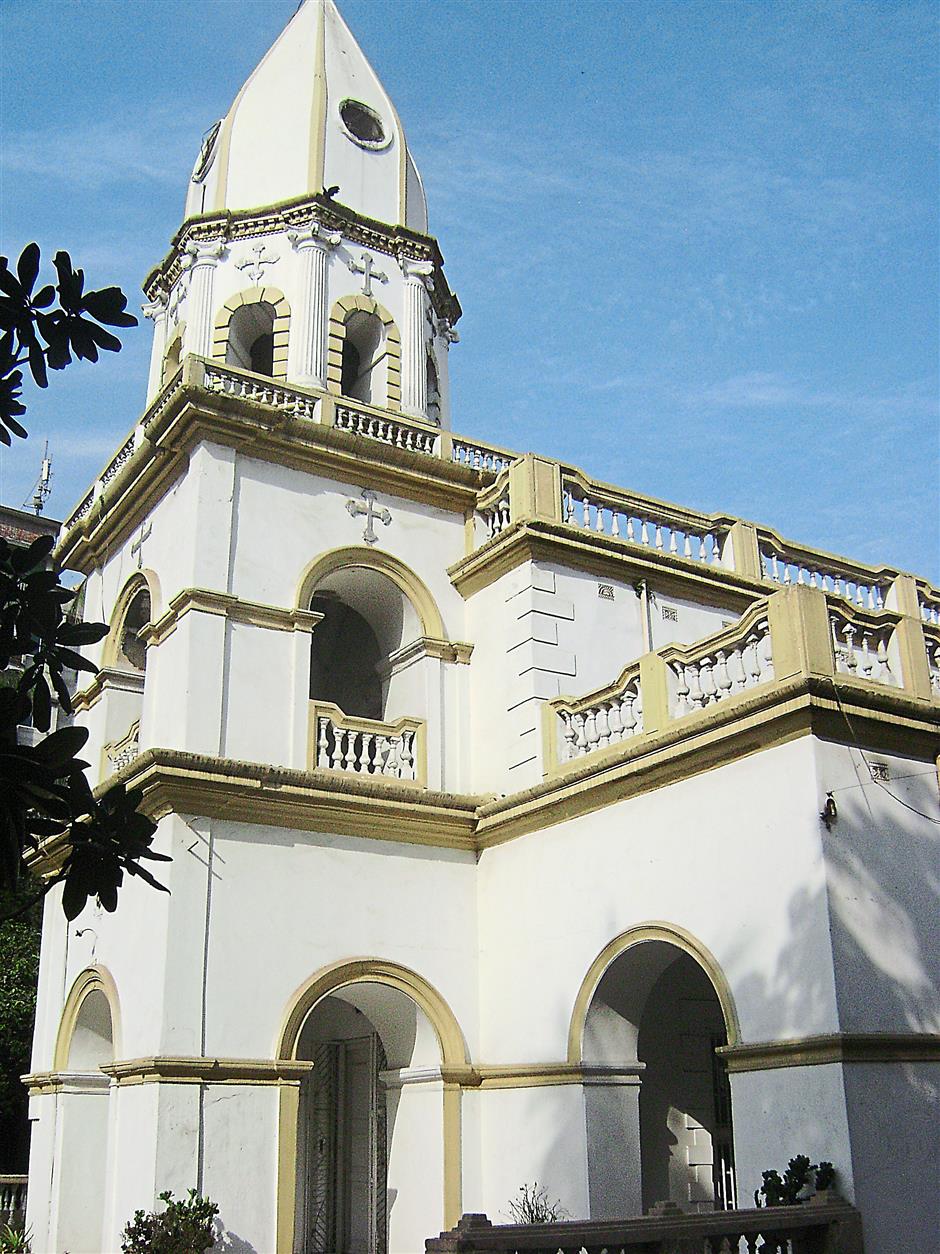 The old Armenian Church in the Armanitola area of Old Dhaka.

If the Dhaka Art Summit held earlier this year is any indication of this city’s status as a repository of art, then you’d better believe that the art scene here is thriving, to say the least! If you fancy yourself as an art lover, then you must visit the city’s various art galleries – like the very eclectic Dhaka Art Centre in Dhanmondi that houses works by both local artists such as Shohag Parvez and Bulbon Osman, as well as international ones.

Next, take a colourful cycle rickshaw to the famous Bicycle Street – also called Bangsal Road – which is lined with shops selling bicycles of all kinds as well as stalls that do the special kitschy rickshaw art. I encountered it in all its gaudy glory adorning the millions of cycle rickshaws plying routes all over Dhaka.

A few yards away, at the 300-year-old Hindu Street called Shankharia Bazaar, your ears will tune into the sounds of workmen fashioning intricate pieces of jewellery from gold and other precious metals. This street is also the “Ground Zero” of Dhaka’s Hindu community. And come the Durga Puja festival season in October each year, I learnt, it is transformed into an open-air arts museum where huge tents called pandals are set up, dotted with idols and other religious iconography for you to marvel at. 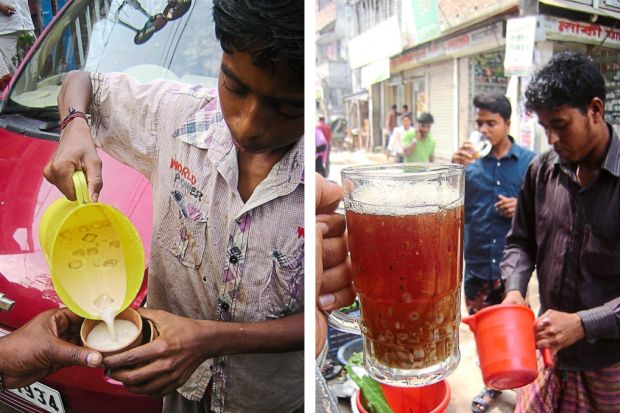 Take In The Flavours

Distinct from its West Bengal counterpart in India, the rather fruity and multi-layered Dhakai cuisine is in a genre all its own. If I were to recommend some top-notch specialities that you simply must try here, I would have to start off with the legendary kacchi goat biryani (a fragrant rice cooked with meat) at Sunami Restora near the Jhigatola Bus Stand at Dhanmondi.

Tender pieces of mutton are ensconced in soft, fragrant rice served with an on-the-house glass of borhani – a thin version of yoghurt, flavoured with cumin and green chillies.

Equally popular is the vuna khichuri of Star Kebab Restaurant in Banani which is similar to the famous Indian comfort food dish, khichdi. Here, however, pieces of chicken or mutton are stewed with the rice and lentils, resulting in a delectable concoction.

To indulge your sweet tooth, try out typically Dhakai sweets like ros bhora made from lentil flour and the cloyingly sweet patisapta that you will find being sold almost everywhere.

But for a real taste of the city, do try the wonderful variety of street food – from the tamarind water-filled fuchkas and the kacang putih-like spicy jhalmuri to minced meat patties called cutlets and the piquant chotpoti which is made from potatoes and chickpeas that are mixed with chillies, onions, tamarind sauce, salt and spices and served with grated hard-boiled eggs. 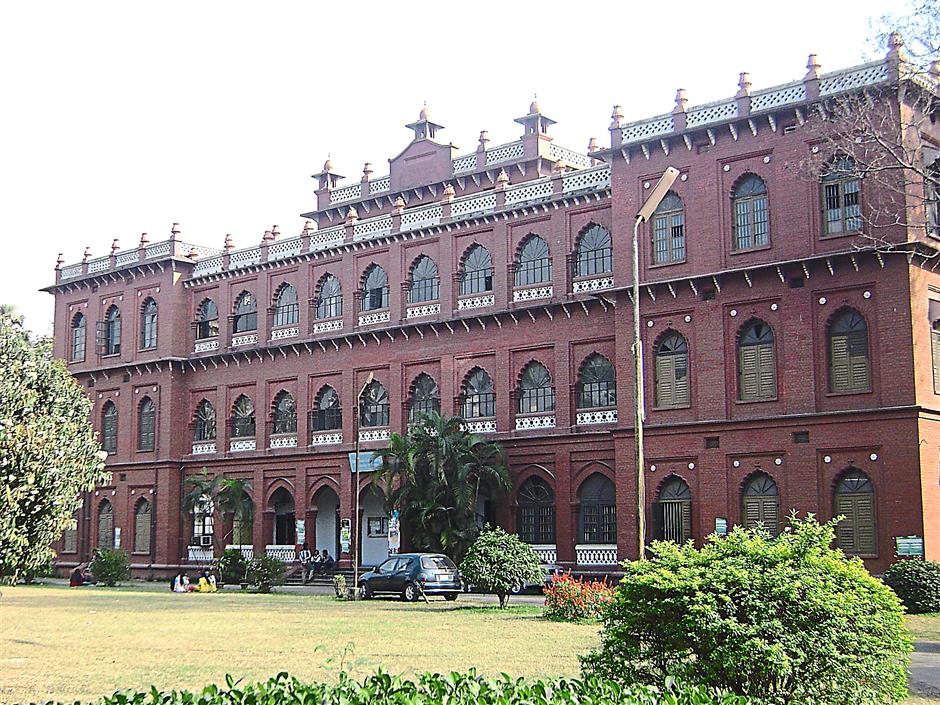 A remnant of the country’s colonial past, the red-brick Curzon Hall is over a century old. Once supposed to be the Dhaka town hall, it is today part of Dhaka University’s school of science.

An easy afternoon post-lunch walk into the city’s rather well-tended Dhaka University precinct will reward you with serendipitous findings, like the red-brick Curzon Hall. This 110-year-old structure built in the colonial-meets-oriental style of architecture, intended to serve as the Dhaka town hall, is today part of the university’s school of science.

A little further down the road you will see the stunning ivory Supreme Court building and its pristine manicured lawns and fountains.

But the pièce de résistance is the startlingly modern and abstract-looking National Assembly Building or Jatiyo Sangsad Bhaban in Sher-e-Bangla Nagar in Central Dhaka. A true architectural marvel, the building was finished in 1982 – with work having begun in 1961 – and is based on the designs of American architect Louis Kahn.

With a moat-like structure filled with water surrounding it, thus referencing the country’s “water world” moniker, the main building is made up of huge walls deeply recessed by porticoes and large openings of regular geometric shapes that let the light stream in. 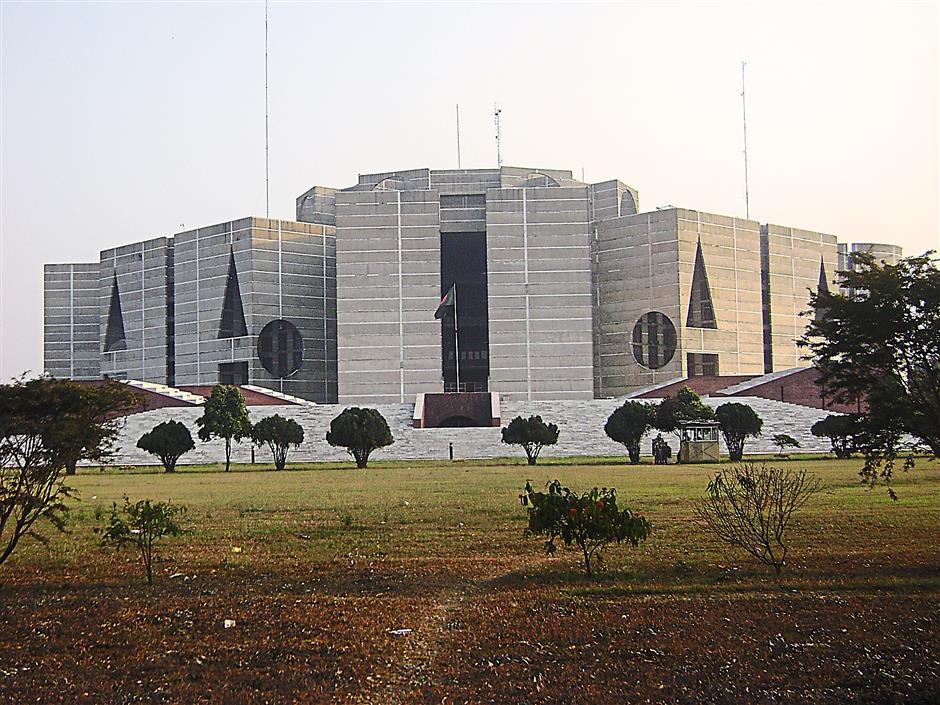 The main National Assembly building is made up of huge walls deeply recessed by porticoes and large openings of regular geometric shapes that let the light in.

It is true what they say about the setting sun – it’s the ultimate flatterer ... And nowhere does this hold more water (pun intended!) than on a relaxing cruise down the Buriganga River in a small wooden boat. By day, this water body is a grey, marshy, unappealing sight, but as the pink rays of the evening sun slowly light it up, magic begins and all the day’s ugliness is quickly forgotten as you lose yourself in its iridescence.

Hire a wooden boat for as little as BDT100 (RM4.15) per hour at the chaotic Sadarghat Boat Terminal in South Dhaka and ride the placid waters of this river that gets its name from the Bangla word for old lady, bhuri.

Make sure to take in the spectacular sight of the gargantuan three-level steamer ships with whimsical names like Comet and Rocket that take passengers on journeys to other places in Bangladesh like Chittagong and Sundarbans.

A perfect way to end your tryst with Dhaka, a city that you’ll come to both love and hate, and certainly one that you simply can’t ignore! And the good thing is, the city’s attractions can all be seen in one day. 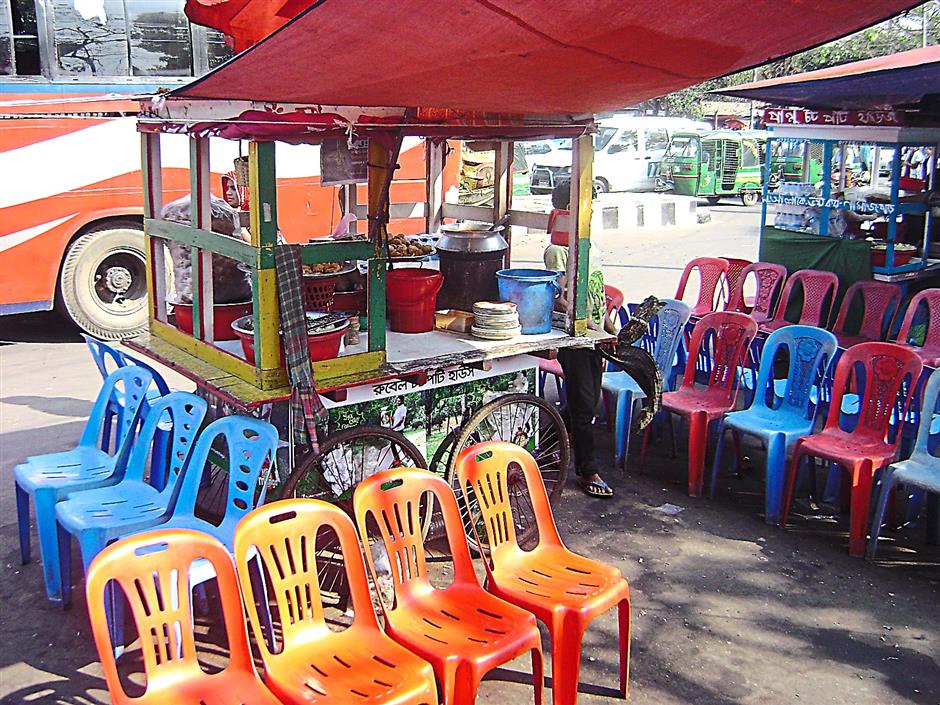 Makeshift food stalls, like this one outside Dhaka University, can be found everywhere.

There are a number of airlines offering direct flights from Kuala Lumpur to Dhaka. Visas are required, and can be applied for at the Bangladesh High Commission in Kuala Lumpur. It takes three to four working days to process.

Travel within Dhaka is easy with many auto rickshaws (called “baby taxis” in the local vernacular), cycle rickshaws and fume-spewing buses plying between its various attractions and neighbourhoods. 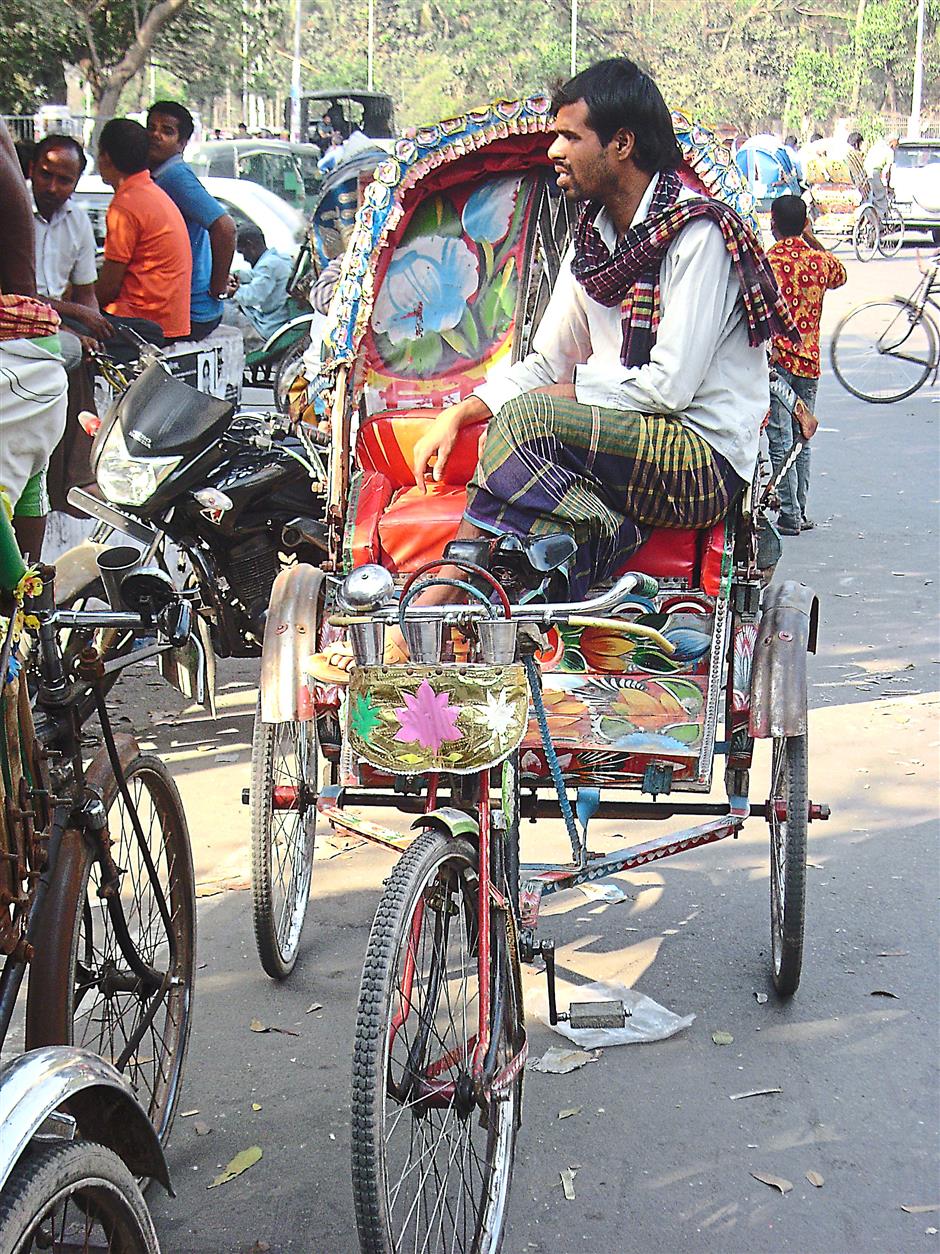 Rickshaws are the usual way to get around in Dhaka.

The months from October to May are the best time to visit Dhaka. The weather then is pleasant to sunny, while June to September are the hot and humid months.

A good range of accommodation is available that suits most budgets. It is recommended to go for three- to four-star accommodation that costs an average of 6,000 Bangladeshi Taka (RM251) per night for two, inclusive of breakfast.

> Ready-made apparel. (Dhaka is a hub of garment production for some of the world’s top high-street brands.)