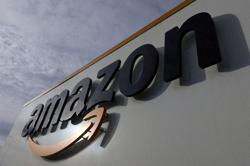 ROME (Reuters) - An Italian court has suspended a decision on a request by e-commerce giant Amazon to annul a record 1.13 billion euro ($1.12 billion) fine imposed by Italy's antitrust watchdog for alleged abuse of market dominance, a court ruling showed on Friday.

Italian administrative court TAR del Lazio said it had suspended judgment pending a ruling by the European Union Court of Justice over the case.

Last year Italy's competition watchdog ruled that Amazon had used its dominant position in the Italian market for intermediation services on marketplaces to favour the adoption of its own logistics service by sellers active on Amazon.it.

It subsequently imposed one of the highest penalties on a U.S. tech giant in Europe.

Amazon said at the time it "strongly disagreed" with the Italian regulator's decision and would appeal.