Signs of AMD are seen at the China Digital Entertainment Expo and Conference, also known as ChinaJoy, in Shanghai, China July 30, 2021. REUTERS/Aly Song/Files

(Reuters) - Chipmaker Advanced Micro Devices Inc on Thursday provided third-quarter revenue estimates that were about a billion dollars less than previously forecast, signaling the chip slump could be much worse than expected.

AMD shares dropped 4% in after hours trading, dragging down shares of Nvidia Corp and Intel Corp by over 2%.

"I think AMD is showing that nobody is safe from the post-pandemic PC downturn, and those inventory corrections are also impacting the company," said Anshel Sag, chip analyst at Moor Insights & Strategy. "Overall, this looks to be more of a cyclical correction within a single, albeit large, business unit rather than a structural or strategic one."

The company said it expects third-quarter revenue of about $5.6 billion. That compares with its forecast in August of $6.7 billion, plus or minus $200 million.

AMD said its earnings will be released Nov. 1.

(Reporting by Yuvraj Malik in Bengaluru and Jane Lanhee Lee in Oakland, California; Editing by Sriraj Kalluvila and David Gregorio) 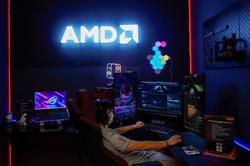 Opinion: Musk's Twitter won't die. Look at Telegram
Amazon to restart advertising on Twitter - Platfomer reporter
Search for answers in US triple killing to focus on murky world of online predators
Opinion: San Francisco's self-cleaning public toilets make me scared for the future
Review: 'Gotham Knights' has some bright spots, but doesn’t carry torch to 'Arkham' video game legacy
Musk says 'possible' that Twitter gave preference to leftists during Brazil election
Crypto broker Genesis owes Gemini's customers $900 million, Financial Times reports
The first SMS was sent 30 years ago. When will the last one be?
How to start a WhatsApp chat without, ugh, creating a new contact
Where to turn off some of Windows 11's biggest annoyances