By DEREK GATOPOULOS and THANASSIS STAVRAKIS 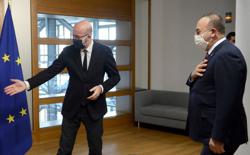 A kindergarten teacher reads a fairy story as Panos raising his hand with his twin sister Marina watch the online lesson in Athens. Most other European countries have vowed to keep schools open, but the pandemic has hit Greece hard for the first time in recent weeks following a successful lockdown in the spring, overwhelming hospitals in parts of the country. — AP

ATHENS, Greece: There’s just 10 minutes left to come up with a story using items scattered on the prep table: Leaves and ferns from the schoolyard, scissor-cut scraps of colored paper, a glue stick, and two hand puppets – a long-tailed squirrel and a blue hedgehog.

When class begins, two teachers put on raspy play-voices and let the puppets, Jo the hedgehog and Joo the squirrel, greet their preschool students – except the desks in front of them are all empty.

As European governments double down on restrictions, Greece has taken the additional step of moving all school and university tuition to remote classrooms to cope with an alarming rise of Covid-19 infections.

Jo and Joo, hovering over a laptop camera, bob to music and welcome four-year-olds as they appear onscreen: “Hello Marios!”...”Oh Theodora, you have the Christmas tree up already.” Finishing each other’s sentences: “There is this virus that has closed all the schools. But we can keep playing and learning new things.”

As part of a pre-Christmas lockdown, schooling here is being held live online with teachers sitting in closed classrooms or broadcasting on state television. The shutdown expanded to all school grades on Nov 16.

“We’re trying to keep everyone in touch, the kids with their teachers and the kids with each other,” says Ioanna Kabouri, principal at the preschool in the mixed-income Halandri area, north of Athens.

“People can’t go outside so we use materials that children can find around the house or nearby, like making things like collages with leaves.”

The priority for most European Union governments has been to keep schools running through the winter, typically using online material only for middle-schoolers or to help reduce crowding.

But Greek policymakers say the shutdown reduces daily movement for an estimated 2.3 million people – children, teachers, parents – out of a population of 10.7 million, providing a vital pause for the overwhelmed state-run health system.

The pandemic has hit Greece hard in recent weeks for the first time, following a successful lockdown in the spring.

Daily infection levels in November are up to 30 times higher than the previous peak recorded in April, based on rolling average data. The rate of death is currently about 15 times higher.

“Nothing can replace face-to-face teaching in a classroom setting.... But the pandemic can’t stop education. So we all have a duty, the state and the education community, to make sure the education process continues as smoothly as possible,” Education Minister Niki Kerameus told the AP.

The jump to online learning in a country lagging the EU average in the use of online services has not been without problems.

An online platform used for live lessons suffered crashes in the early stages and some households with more than one child reported bandwidth problems or lacked the necessary number of networked devices. Left unsupervised, some children joined chat groups to coordinate pranks on teachers.

Kerameus said the programme had been successful in its aim to keep children engaged with their schools during the lockdown and keep up with the curriculum.

"I’ve always said, schools will be the last to close in a lockdown and the first to reopen,” she said, visiting a classroom at a school, converted into a studio for recording lessons. She thanked teachers who volunteered to go on national television.

Math teacher Rania Koukli runs a YouTube education channel with her husband and was picked by a state education board to present elementary-grade lessons.

TV teachers, she said, were amused that ratings on a seldom-watched state television channel had skyrocketed to rival popular talk shows and live sporting events.

“Sometimes kids recognise me outside of school. ‘You’re that teacher,’ they’ll say.”

With mic transmitters strapped to her belt and standing in front of studio lights and a semicircle of black sound curtains, Koukli says she enjoys the challenge.

“I just imagine that I’m in a class full of children and that they are ready to ask questions. There’s no one there, but that’s what I keep in my head,” she said.

“I think this type of remote learning is here to stay. It doesn’t replace the classroom but it’s helpful. When the kids come back to school, then we’ll know how good a job we’ve done.” – AP A kindergarten teacher reads a fairy story as Panos raising his hand with his twin sister Marina watch the online lesson in Athens. Most other European countries have vowed to keep schools open, but the pandemic has hit Greece hard for the first time in recent weeks following a successful lockdown in the spring, overwhelming hospitals in parts of the country. — AP

Teacher Aleka Michou gives an online lesson to C class students in an empty classroom of elementary school in Athens. Despite some problems, they say it keeps children in touch with their schools. — AP