Covid-19: US teen volunteers organise service to help most vulnerable during coronavirus outbreak

Busnawi, 16, right, places groceries in the trunk of her car, after she and Riel, 16, left, and Mendoza, 17, filled an online grocery order for the site Six Feet Supplies, an organisation of student volunteers, in Valencia, California. — Photos: Los Angeles Times/TNS

LOS ANGELES: Christine Riel stared at the shopping list on her cellphone the same way Lewis and Clark might have once studied their maps, searching for a clear path forward while hoping to avoid any unnecessary backtracking.

To Riel, a high school junior, the wide aisles of an Albertson's grocery store in Santa Clarita are nearly as daunting as the untamed Pacific Northwest must have seemed to the two explorers.

"I do not know how to shop," Riel, 16, said with a heavy sigh, recalling an earlier supermarket run that lasted nearly three hours.

Neither of those trips, nor any of the frustration they brought, was for anyone she knows. Instead, Riel, wearing a blue paper face mask and white rubber gloves, ventures out most days to shop for strangers who can't leave home while the novel coronavirus preys on the old, infirm or those with otherwise fragile immune systems. Riel, 16, left, and Mendoza, 17, fill an online order at Albertson's grocery store in Valencia, California. Both are volunteers with Six Feet Supplies, a free service started by local teenagers to help the most vulnerable during the coronavirus outbreak.

And she's not alone. Six Feet Supplies, a free student-led service that takes its name from the separation required by social distancing, has used more than 100 volunteers to deliver more than US$27,000 (RM117,593) of food to 260 homes in targeted areas of Los Angeles County in the last six weeks. Another group of teens developed a platform that allows neighbors to assist one another by requesting or donating hard-to-find goods and services.

At a time when many adults have been left feeling anxious and overwhelmed by the spread of Covid-19 and the disruption of normal life it has caused, students from six Santa Clarita Valley high schools have stepped into the void, offering critical help to many whose needs were going unmet. The delivery service serves Santa Clarita, the city of San Fernando and West Los Angeles.

"A lot of parents just think we're always on our phones or always playing games," said Avi Basnet, a 16-year-old Valencia High junior who wrote much of the coding for the Supply Neighbor website. "It's really nice to prove them wrong. That we actually can, like, make a difference in the world."

The ideas for Six Feet Solutions started with Zoe Monterola and Eric Luo, juniors at rival high schools who studied together at Global Prep Academy, an after-school programme nestled beside a chiropractor's office in a nondescript strip mall. GPA's curriculum emphasises community involvement, so days after Santa Clarita's high schools were locked down in mid-March, students were already brainstorming volunteer opportunities when David Najar, the academy's founder, related a story about a neighbour leaving a note asking him if he needed anything.

Monterola and Luo figured GPA could expand that idea community-wide and quickly developed a program to make it happen. Clients can go to the Six Feet Supplies website, provide their name, address, phone number and a shopping list, with requests that can be as simple as "hamburger buns" or exact enough to include the brand name, size and flavor. Clients can also request goods from a specific market, with one recent trip requiring stops at three different stores. 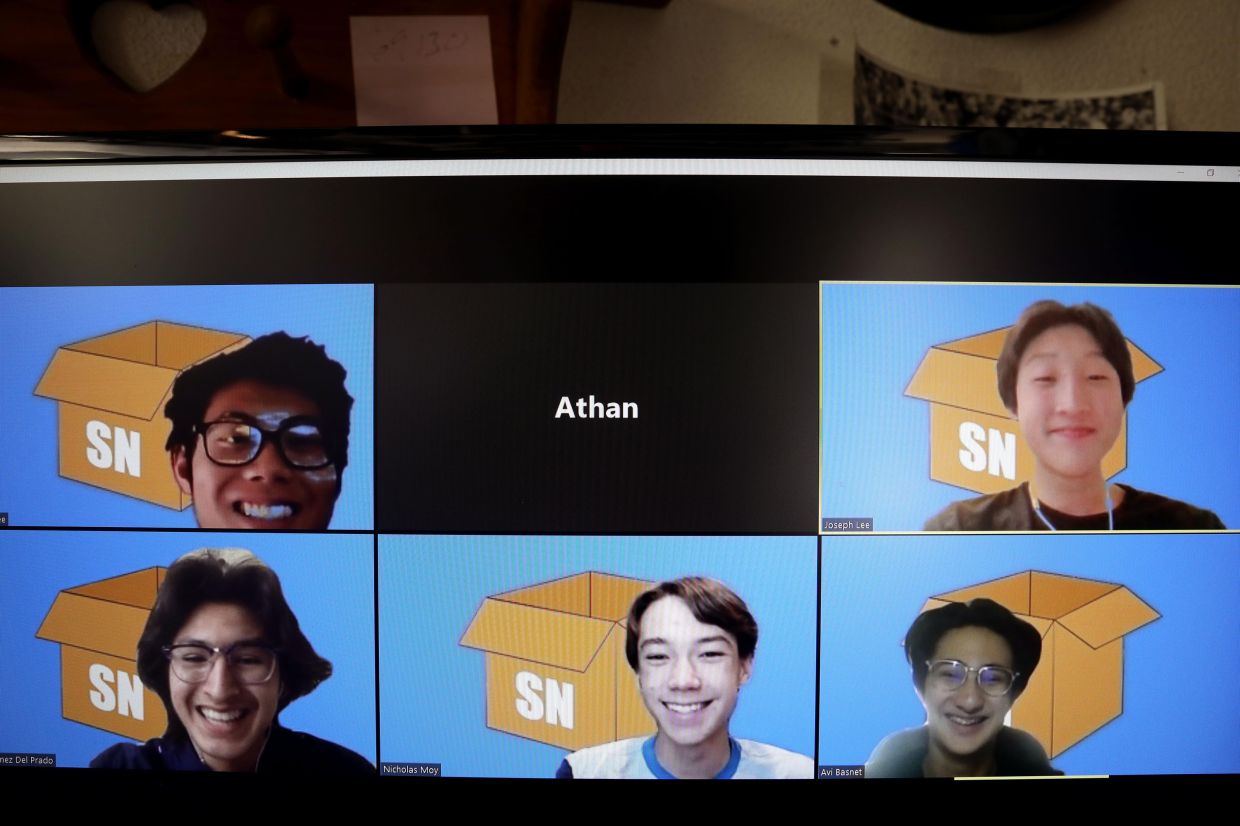 Clockwise from upper left, Valencia High School students, Hayden Lee, 17, Joseph Lee, 16, Fabio Nunez Del Prada, 16, Nicholas Moy, 16, and Avi Basnet, 16, appear for a portrait shoot on a computer screen using Zoom. The students wrote a computer program, SupplyNeighbor.com, that allows people to plug in their zip code, then communicate anonymously with people in their area whom they can ask for help, advice, trade supplies.

Armed with that information, the group dispatches students to collect the goods, pay for them and deliver them to the client's front door, texting a copy of the receipt so they can be repaid online. And though they have no physical contact with the clients, the students do get emails.

"There are a lot of small interactions that make it worth it," said Riel, remembering the thank-you note a man undergoing cancer treatment left at his door. "You obviously don't know your customer that well. But when we understood that they really are people that you need to help, that's what made it really fulfilling.

"I was on board from the start."

On a recent weekday afternoon Riel, with two shopping lists on an app in her cellphone, rendezvoused in a supermarket parking lot with Krysta Mendoza and Shaira Busnawi, classmates at West Ranch High in Stevenson Ranch.

Masked and gloved, the girls began in the produce section, tossing a head of lettuce, two tomatoes and an avocado into the cart when Riel's phone pinged. The client, a retired teacher named Randy Gilpin, wanted to add some strawberries to his order so Riel grabbed a basket and texted Gilpin a photo for approval.

Most of the shopping trips are routine, with flowers often the most exotic item. But Busnawi, who has charged nearly US$2,000 (RM8,710) worth of groceries to her debit card in 16 trips, said she was once asked to buy a case of wine.

The shopping trips, she says "have opened a whole new world for me. I was always living in my own little bubble. I didn't know how bad this pandemic was."

Now, with school closed, she also volunteers with Riel at a local homeless shelter; Mendoza, a cheerleader, is vice president of a group that works with special needs children at an elementary school.

"We have a motto of relationship, rigor, relevance," said Mark Crawford, the principal at West Ranch. "Relationships always come first (and) volunteerism and giving back is forging a positive relationship with the people and community you are a part of.

"I hope that is something we inspire at our school."

Halfway into the Albertsons visit the girls huddle close enough to hear one another through their masks, with Riel dispatching Busnawi on a solo mission to find olive oil while Mendoza heads in the opposite direction in search of something else. 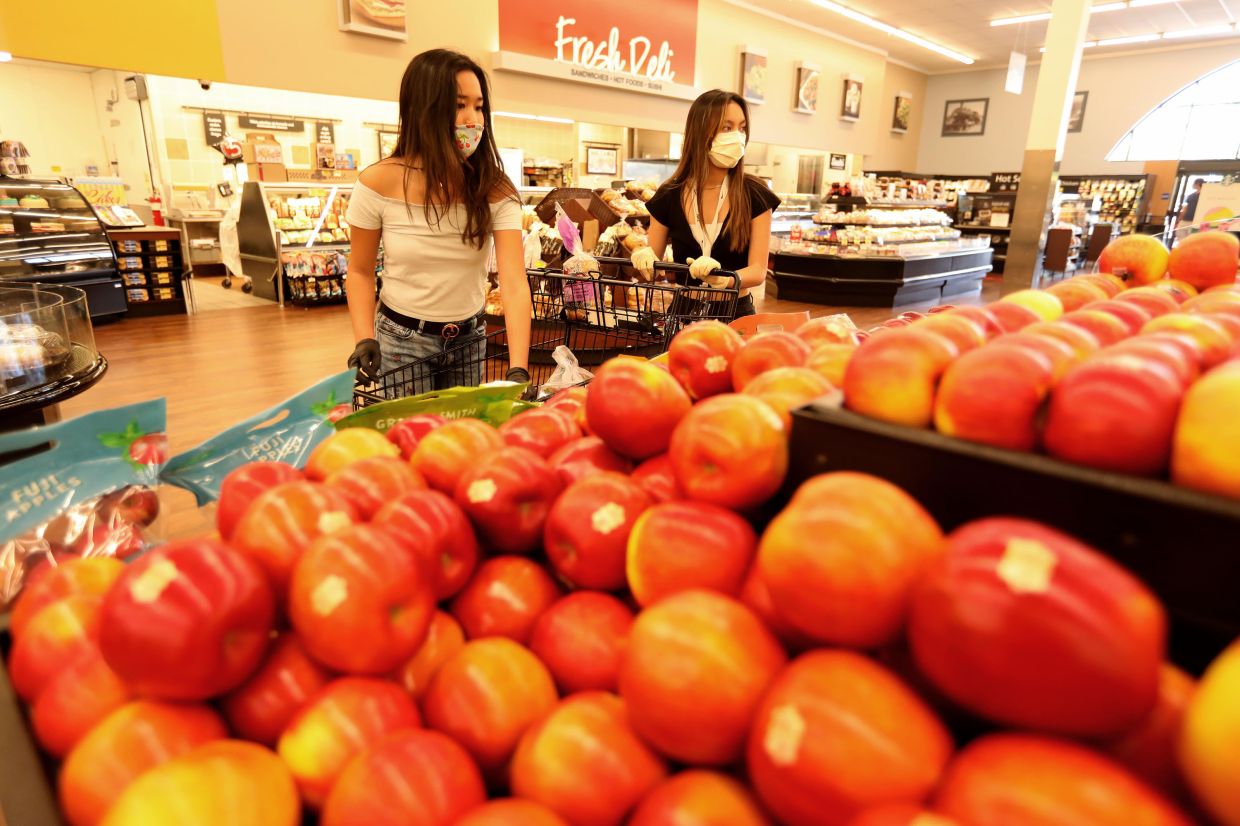 Busnawi, 16, left, and Mendoza, 17, shop for groceries at an Albertsons store in Valencia, California, while volunteering for the Six Feet Supplies service.

Santa Clarita, a wealthy bedroom community about 35 miles north of Los Angeles, is best known for the Six Flags Magic Mountain amusement park and its 100 miles of hiking trails and bike paths, so the residents that Six Feet Supplies serves are not poor; they just can't go shopping for themselves. That's an issue that strikes close to home for Mendoza, 17, whose parents both have diabetes, leaving them with a greater risk of complication should they get Covid-19.

"I just decided I have all this free time. Why not volunteer?" she said. "At the end of the day we'll get a text message and they'll tell us their story and it lifts you up. You're just like 'I want to do it again'."

After an hour of shopping the girls have filled two orders, with Riel charging the US$183.09 (RM797.41) to her parents' credit card. After packing the food into the trunk of Busnawi's red Mercedes they make the short drive to Gilpin's home, where they drop the plastic bags on the doorstep as he watches from behind a closed door.

"I'd love to just really shake their hands," Gilpin says as the girls leave. He's not alone. Six Feet Supplies has proven so popular it is expanding to the San Fernando Valley and West Los Angeles and added six other volunteer programs to promote everything from physical health and aid to the homeless to a crisis line people can call if the quarantine has left them feeling depressed or lonely.

About an hour before Riel began her Albertsons trip, Nicholas Moy logged on to Zoom chat from his bedroom about a mile away. Days after classes were suspended at Valencia High, he and four junior classmates begin searching for their own way to help people cope with the pandemic, eventually designing a website where they meet, electronically, several times a week.

"There's like 30 million people who lost their jobs. They're living in fear and stress. We felt the obligation to make something that can help them out," said Moy, a 16-year-old junior so unfailingly polite that he, like his classmates, ends every conversation with "Have a nice day."

Their solution, supplyneighbor.org, was up and running in less than a month, and within two weeks it had grown to 550 users in three US states. The free website, which is designed to be self-run, is a public space for neighbors to request or offer goods and services ranging from groceries and toilet paper to surgical masks and even a plain bag of sugar without having to risk Covid-19 exposure by leaving home. From left, Busnawi, 16, Riel, 16, and Mendoza, 17, deliver an online grocery order in Santa Clarita, California, as the teens volunteer with Six Feet Supplies, shopping for housebound people amid the coronavirus pandemic.

For Valencia High teacher Jerry Ostrove, the website is proof that the five boys have learned more than computing skills in class.

"The really inspirational piece to me is that, instead of spending their free time watching movies or playing video games, they decided to use their time, talent and effort to create something that helps others," he said. "They realized that there were people that had extra and others that didn't have enough. How could they use their technical skills to make those people aware of each other and connect them?

"Instead of succumbing to a fear mentality, they collaboratively stepped up."

The students police the site to weed out political commentary or anything that might pass as commercial activity and continue to tinker with improvements; the next stage, they hope, will involve houses of worship and food banks.

But even without the additions the website's importance, the boys believe, will extend beyond the pandemic.

"The quarantine won't just end one day and then people won't need anything help," said Fabio Nunez Del Prado, 16. "It's going to take a lot of recovery time and our website is still going to be here, it's still going to help people." – Los Angeles Times/Tribune News Service Busnawi, 16, right, places groceries in the trunk of her car, after she and Riel, 16, left, and Mendoza, 17, filled an online grocery order for the site Six Feet Supplies, an organisation of student volunteers, in Valencia, California. — Photos: Los Angeles Times/TNS

Christine Riel, 16, left, and Krysta Mendoza, 17, juniors at West Ranch High School in Santa Clarita, California, fill an online order at Albertson's grocery store in Valencia, California, this week. Both are volunteers with Six Feet Supplies, a free service started by local teenagers to help the most vulnerable during the coronavirus outbreak. — Los Angeles Times/TNS

As they maintain proper social distancing, Busnawi, 16, left, waves to Joanne Halcon, who thanks her for delivering groceries to her home in Santa Clarita, California. — Los Angeles Times/TNS 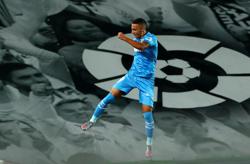 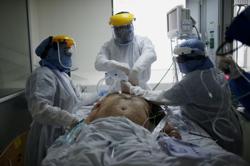