WASHINGTON: Some complain about joggers panting on passers-by. Others wonder what to do when they overhear drunken partygoers rejecting quarantine measures. Still more question whether people they see in the street are really on “essential” business.

And as users test the line between civic duty and intrusive surveillance — often trying to shame their peers into obeying social distancing rules — experts worry that a practice once frowned upon is becoming normalised.

“It distresses me greatly to see a few uncaring louts who scoff at the safety rules that are meant for all of us to get through this awful situation,” said one user on a listserv for a wealthy suburb of the capital Washington, which has seen a slew of complaints about people ignoring distancing guidelines.

"I have a suggestion — if you see such behaviours as mentioned above — why not take photos/videos of the offenders? This could discourage their dangerous behaviours," said another.

Online shaming is nothing new — and neither is neighbors keeping tabs on one another — but never in history have so many people had such a high stake in enforcing social rules, or such a fast and accessible platform on which to do so.

"There is a sense that if you do it you can save lives... With Covid-19, we're scared and there is an urgency to enforce the social distancing rules. Shaming is really one of the only tools we have," says Dr Emily Laidlaw, an associate professor at the University of Calgary who studies privacy law and online shaming.

Examples are rife on platforms such as Nextdoor, a hyperlocal social media network which demands users post under their real names and verify their locations.

"My neighbours are all drunk and having a party next door. One of them went on a loud tirade near my door that another month of quarantine is stupid and that he wasn't going to do it," posted one frustrated resident of a middle class west Los Angeles neighbourhood recently.

"You need to report them when it's happening because that just means another month for us to be indoors," another user replied.

Public shaming is against community guidelines and comments deemed as falling into the category will be removed, according to the app.

It also touts the Kindness Reminder, a feature announced last year to keep conversations respectful, and which has been modified in recent weeks with language specific to Covid-19.

Wicca Davidson, who runs a listserv for a municipality in Maryland, says that since the pandemic began she has seen an uptick in complaints about behavior.

"We don't want to give a few people the ability to derail the use of the listserv," she told AFP.

‘Please stop being so judgemental’

Privacy expert Laidlaw also believes such policing can be effective.

But "there is a cost that should be acknowledged — casualties who are taken down by this unfairly, and the normalisation of neighbourhood surveillance," she said.

One member of the Washington suburb listserv echoed her fears.

"I sympathise with the concern but becoming a police-state type of community isn't healthy," the user wrote.

"This is not ok to take picture of people and post them," another person wrote on a Nextdoor group in Los Angeles, after a user posted photographs of people they felt were walking too closely together. "What is next? Train to Dachau?"

Laidlaw said policing and shaming were already on their way to being normalised online before the pandemic, noting that "shaming sites are not new, nor are neighbourhood watch/surveillance sites".

But until now, she says, there was also strong condemnation of public shaming.

"I worry when the dust has settled, what was once contentious will be the new normal."

That is problematic because of the lack of context online, and the speed at which such condemnation can spread.

For example, in Brooklyn, one neighbor complained on Nextdoor about seeing a group of people in the street — a group which another user said was likely from a local substance abuse meeting.

The sentiment is also echoed in one of the many viral Facebook posts calling for compassion at a time when so many are already struggling to cope.

"Do you ever think maybe that guy buying a gallon of paint knows he must keep busy because idle hands in the past has caused him to relapse and pick up that case of beer?" it reads.

"I know we are all on edge but please stop being so judgemental of others." — AFP 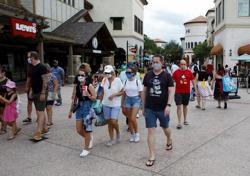