People are paying real money to get into virtual Zoom nightclubs

People react inside an apartment while watching the stream of an online party organised by the ‘Culture of Sound’ nightclub, after local authorities imposed restrictions on public gatherings as a measure to prevent the spread of coronavirus disease (Covid-19), in Kharkiv, Ukraine. — Reuters

It’s only 5pm on a Saturday in Los Angeles, but the Zone — a 16-room virtual club on the videoconferencing app Zoom — is already in full swing.

"You’re late!” admonishes a bouncer with a glowing Celtic symbol on her forehead, peering through a pixelated window at a gaggle of new guests tuning in from their homes, making sure they are properly outfitted, both with drinks and in looks. She clicks them into different “dance floor” chat rooms, where revelers in colorful costumes shimmy to a livestreamed DJ set while two fluffy puppets maneuvered by an invisible hand waltz in each other’s arms. In an additional networked room, a man in a pink wig leads a spirited conversation about sustainable farming. At the end of the night, the party’s host invites everyone to the "hot tub” room — swimming attire required. Shirts are peeled off and snorkels pulled on as guests gamely play along.

“Someone has handed Zoom to us, and we’re just playing around,” observes one guest, dressed in a Santa hat, who claims to be the son of a pig farmer turned crypto-investor. “This is the cutting-edge, and I’m confident it will bloom into something else.”

Welcome to the new era of clubbing under quarantine. Somewhere on the Internet, a virtual party is always going down.

As in Asia earlier during the outbreak, livestreaming has emerged as an ad hoc emergency support system for the flailing entertainment industry across Europe and the US. Musicians across every genre are broadcasting sets from their bedrooms on platforms such as Instagram Live alongside donation links to their PayPal, Venmo, or Patreon accounts. Such brands as Beatport and Amazon Music have partnered with Twitch to launch marathon sessions featuring prominent DJs like Diplo and A-Trak, with the former raising US$180,000 (RM779,850) for the AFEM (Association for Electronic Music) and WHO’s Covid-19 funds on March 27 and 28.

The coronavirus crisis has hit the music and nightlife industry hard: With event cancelations stretching through the lucrative summer festival season, an economic model increasingly reliant on touring and live shows has imploded, leaving musicians and event organisers scrambling for alternative financial streams. Even after the lockdowns are lifted, a probable long-term contraction of the live music industry, which was projected to be worth US$27.9bil (RM120.87bil) in 2019, has underscored how badly the current economic model is broken. It is unsustainable for working musicians — many of them gig workers without employer-based safety nets.

Some artistes doubt that livestreaming is inherently emancipatory, or even financially viable. "I resent the idea that musicians have to invent an awkward new medium of performance — and busk for tips — when people could just buy their record,” says artist and tech researcher Mat Dryhurst, who coined the term "e-busking” to describe this practice. "The tech isn’t there to make it more engaging than, say, radio,” he continues. "Even in this charitable climate, it isn’t producing impressive financial results.”

Beatport’s fundraising success seems an outlier so far. On the lower end, smaller underground DJs may pull in US$50 (RM217) a stream, while bigger artistes such as Erykah Badu, who broadcast a concert March 23 from her home in Dallas, Texas, pulled in around 10,000 people paying US$1 (RM4) each. While far from what a traditional concert would earn, it was enough for her to do a second one, charging US$2 (RM9), to support herself and her band.

Yet simple, one-directional livestreams only scratch the surface of the rapidly expanding virtual-clubbing landscape. As nightlife appropriates technologies built for corporate conferencing and gaming, new party experiences are emerging to encourage interactivity and community, making the audience active participants rather than passive consumers. (Even this year’s just-cancelled Burning Man plans to go virtual.)

In addition to providing moments of social connection, could virtual clubs emerge as a new model for live shows-and be sustained by brand sponsors, advertisers, and paying subscribers?

At a Zoom party called Club Quarantee, all the usual trappings of a bottle-service club remain-except for the buckets of Champagne. Guests purchase tickets for US$10 (RM43), or can pay US$80 (RM347) for a private room to party alongside Instagram-famous DJs and burlesque dancers. There is ostensibly a dress code. On a recent weekend, the party is full of European models and bearded men in fedoras, dancing along to Macarena.

"A bottle-service club is a symbol of exclusivity and high-quality entertainment. Of course, we can’t sell bottles, but we try to deliver this vibe,” says Club Quarantee’s founder, a promoter who goes by the name Cristian. He worked at such New York celebrity hangouts as 1Oak and estimates that he’s lost about US$10,000 (RM43,325) in income since the city shut down.

Working with a network of 20 promoters, Cristian says his first virtual party drew around 300 people, covering half his costs, which included hiring talent, a videographer, and staffers to check tickets and run security. In the party’s second edition, he broke even. "The main objective is to create a space where promoters can maintain important relationships with our clients and keep them entertained during this time,” Cristian notes. "People are longing for social interactions, and we can offer an important part of the club experience: the emotional connection.”

Creating a safe space for the LGBTQ community to connect with each other is critical to a virtual party called Club Q, which recently earned the title of hottest club on Zoom and has amassed almost 40,000 followers on Instagram.

Run by a crew of four Toronto-based friends, the nightly party is a glittering spectacle of drag queens, queer club kids, and guest DJ sets from such celebrities as Charli XCX, Tinashe, Kim Petras, and HANA. Keeping the club accessible is essential to its ethos. "We have access to people who can’t attend clubs because they have children, social anxiety, disabilities, or live in places that don’t have clubs,” says one of the party’s founders, Andrés Sierra. "We want to maintain this equality, with no elitism.” Thus, the party does not charge a cover and has, so far, covered its US$200 (RM866)-per-night expenses (including a professional Zoom subscription to boost capacity to 1000 people, as well as DJ fees) through voluntary audience donations and a one-time Red Bull Canada sponsorship.

As the party grows, brands have started to eye the popular platform as a new way to access youth culture.

"Companies don’t have a lot of branding opportunities right now, and no one wants to see an influencer advertising, like, hair gummies,” says co-founder Brad Allen. So far, Club Q has collaborated with Paper magazine on a few nights, which helped pull in more celebrity DJs, and is waiting to see if additional partnerships emerge, says Allen. "Without knowing how long the quarantine will be, brands don’t know if they should throw money and commit to this as something for the future.”

It’s clear that virtual clubs are giving us a chance to reconsider how we experience music in a live setting, but it remains to be seen if the freedom, playfulness, and democratizing potential of digital spaces translate to new economic models-and if both brands and audiences are ready to pay to access these experiences.

"There’s a learning process. At first, people were not willing to spend money on Netflix; they were used to streaming movies illegally,” says Club Quarantee’s Cristian. "It takes a while to be accepted and for people to understand it’s not a scam.”

In some senses, if you’ve been to one Zoom club, you’ve been to them all. The platform’s layout is always the same: A featured musician performs a set underneath a carousel of small windows with voyeuristic views into people dancing or lounging in their homes. Channeling the true spirit of nightlife, it’s up to the crowd to create the party’s vibe via active participation-turning down the lights, throwing on a costume, talking to each other in the group chat. These social interactions can feel new and awkward, but we’re hungry for it.

What we’re really paying for is this community, along with a sense of discovery and participation.

"Parties are at the heart of most of what is good in human life: love, friendship, fun, escape, spiritual exploration, etc.” writes London-based Ted Cooke of the Co-Reality Collective in a blog post. "It’s obviously therefore of great importance that we continue partying despite physical distancing.” But how? "It’s not like anyone was attending online parties before the lockdown.”

Virtual parties like the Zone sought to mimic the magic of moving through a club’s different rooms and stumbling into unexpected moments of both dance floor ecstasy and intimate conversations. Cooke’s co-op made about US$1,000 on its first outing with some 250 paying guests, writing an online party manifesto in the process. Just as a choose-your-own-adventure book hacks the static nature of a novel, these parties are hacking corporate technology for new purposes; Club Quarantee, which has become an essential lifeline for the LGBTQ community, is effectively "queering” Zoom.

Meanwhile, a subscription model has been fueling Club Matryoshka, a members-only club accessed via a private Minecraft server in Manila. Founded in 2019, the lo-fi virtual game space runs on PayPal donations and a growing subscriber base on Patreon; members are required to fill out a questionnaire in order to gain admission. It will host a 24-hour virtual music festival on April 26.

Club Matryoshka’s co-founder, a musician named Jorge Juan B. Wieneke V, was surprised at the financial support he’s gotten. "In Manila, most people don’t even like paying entrance for shows, but even without a call-to-action, people have been donating regularly,” he says, adding that he doesn’t see virtual clubs as a substitute for real-life versions but rather as a testing ground for them.

"I’ve been organising shows for eight years, and this makes it easier to test out an artist’s marketability before flying them in,” he says. "I’ve lost a lot of money bringing artists into Manila, only to realise no one’s down to pay for the show.”

"Some people just treat us like a meme,” he adds, "but I really believe in its potential as a new model for gigging.” — Bloomberg 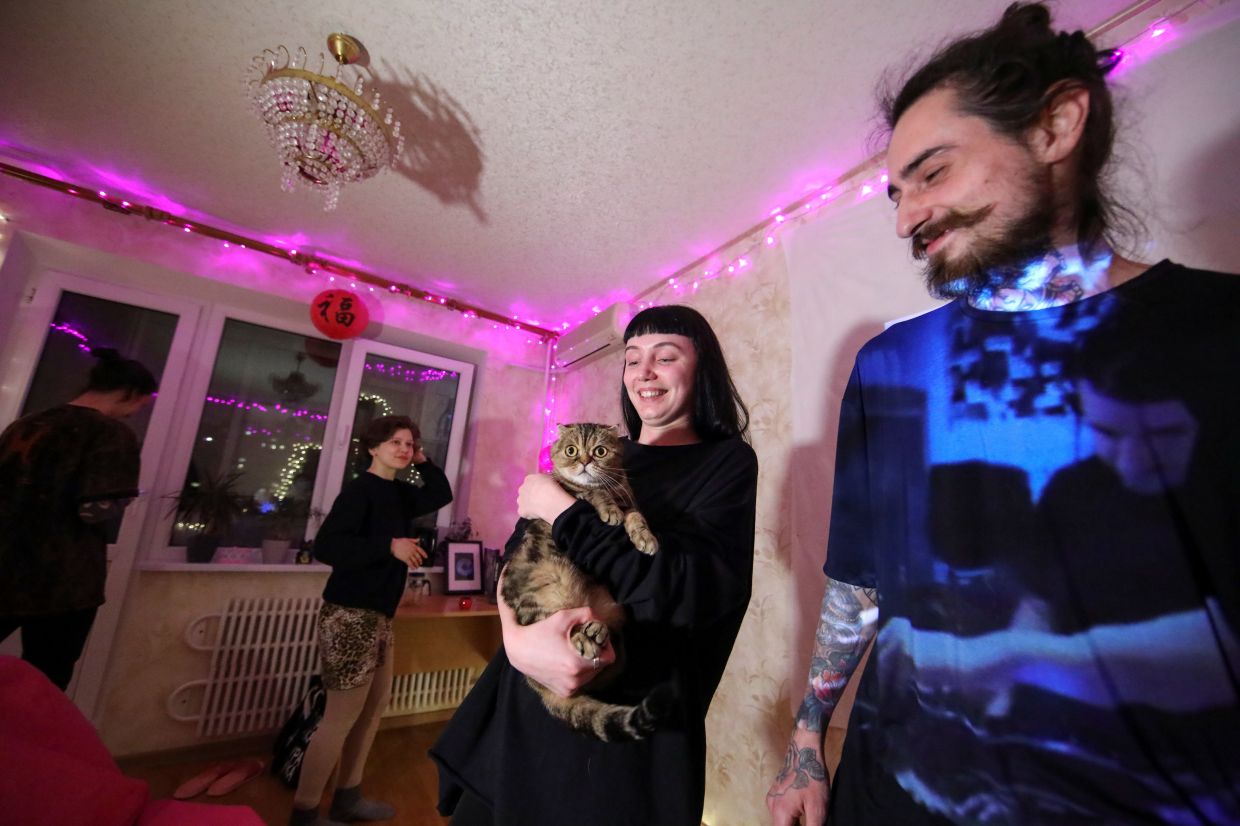 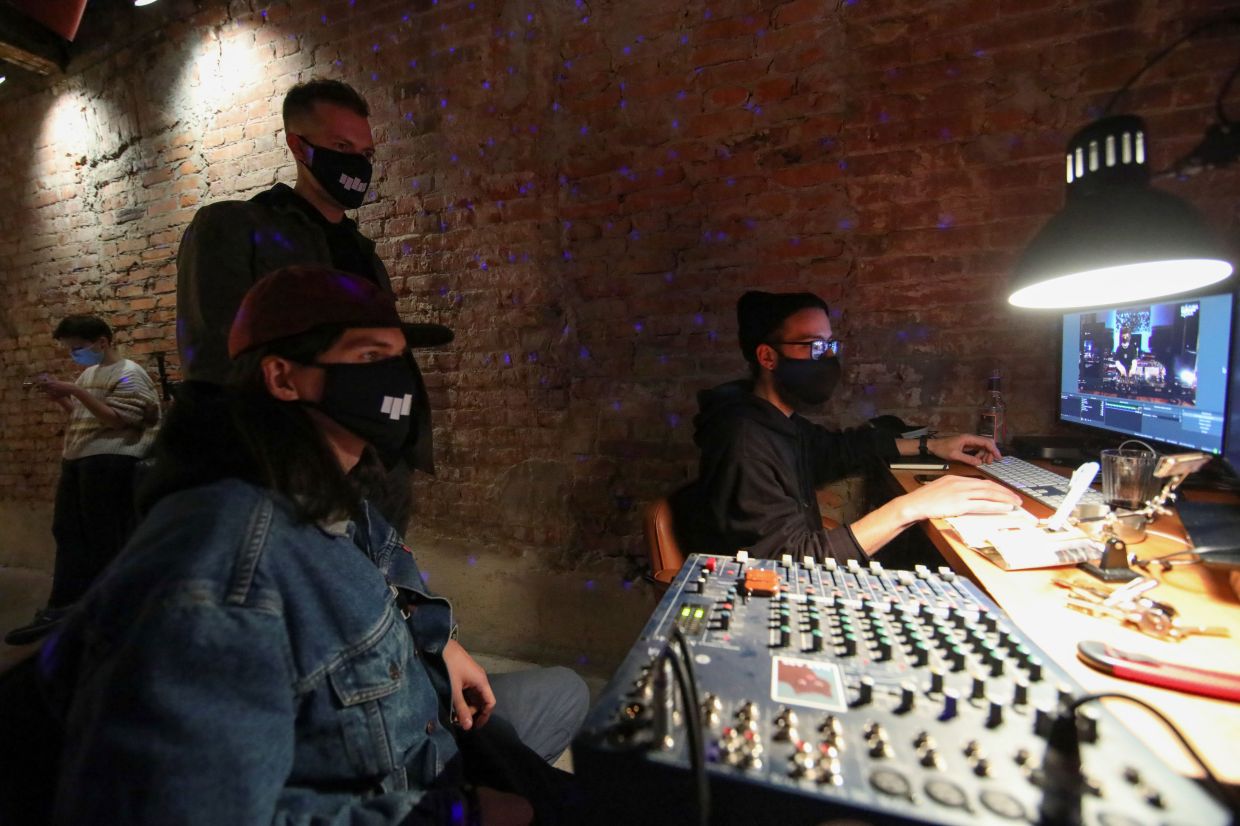 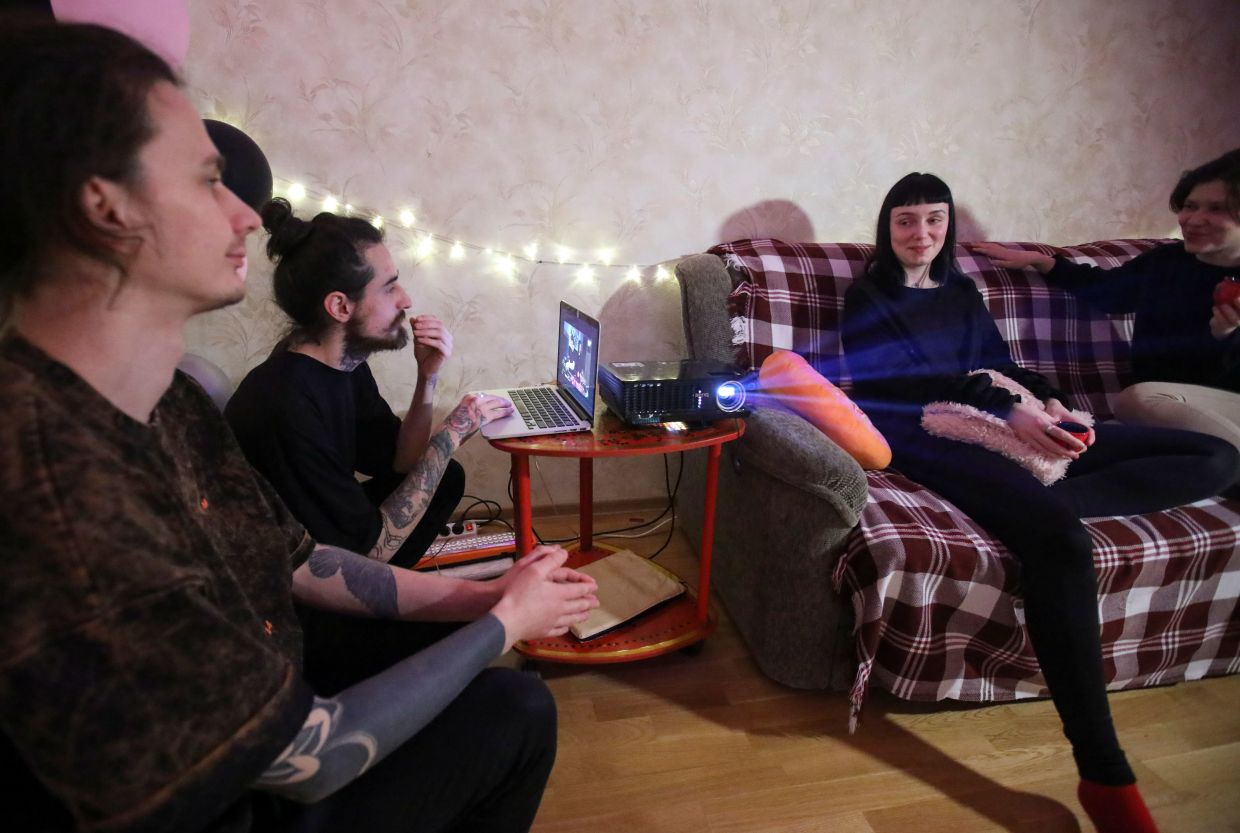 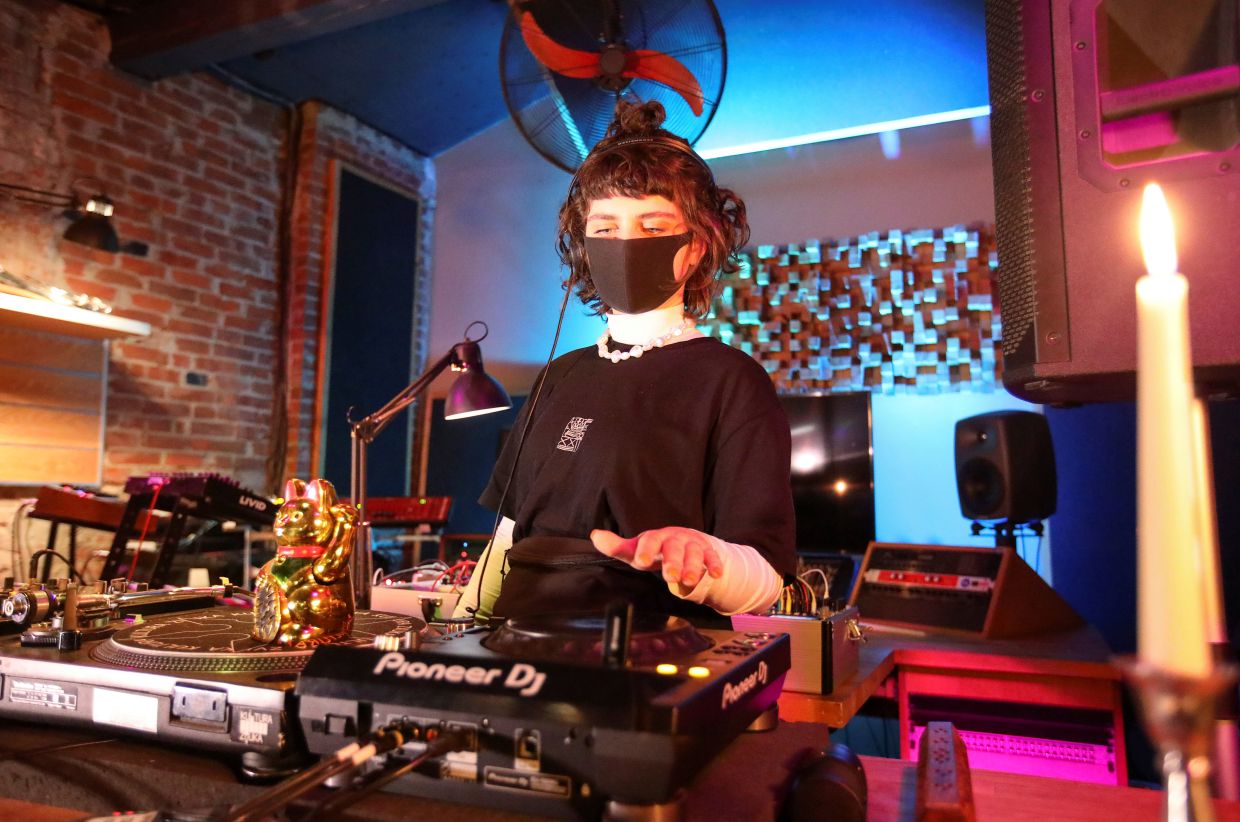 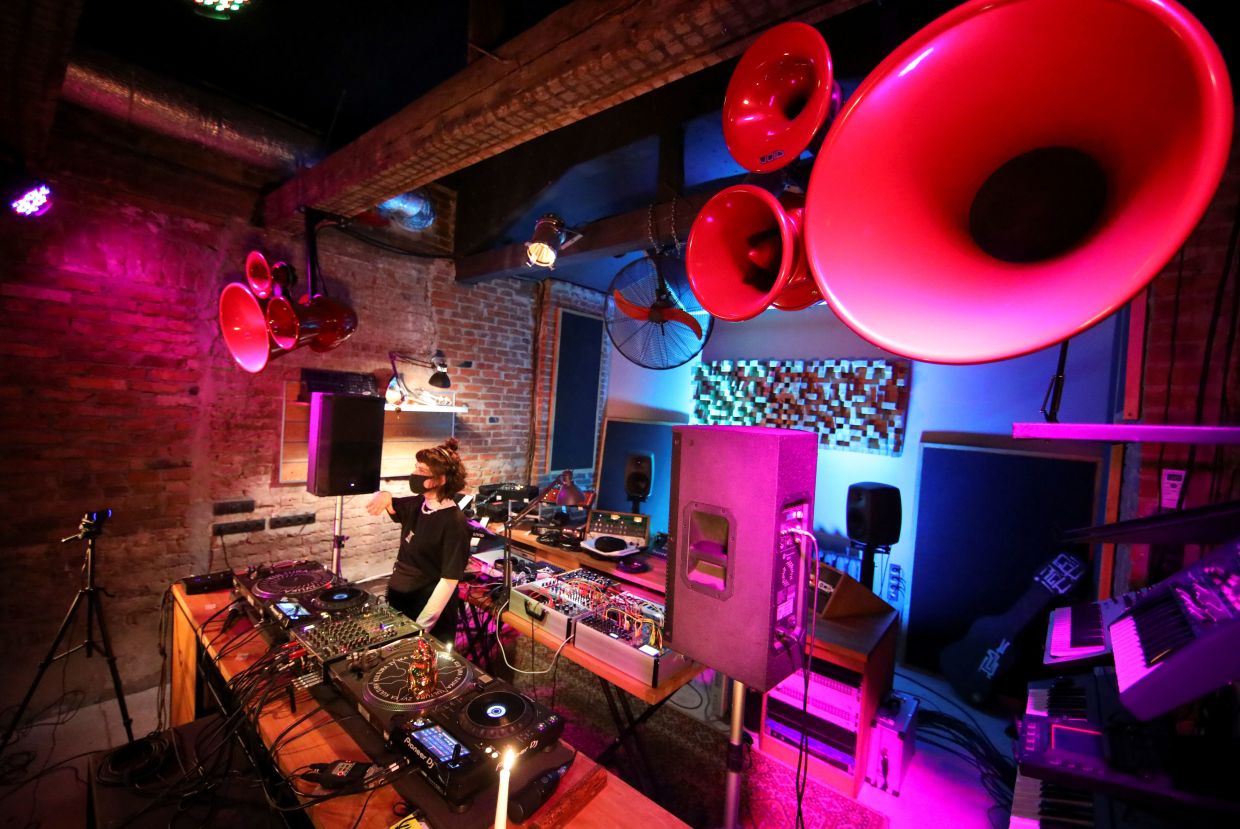 People react inside an apartment while watching the stream of an online party organised by the ‘Culture of Sound’ nightclub, after local authorities imposed restrictions on public gatherings as a measure to prevent the spread of coronavirus disease (Covid-19), in Kharkiv, Ukraine. — Reuters

People watch the stream of an online party organised by the ‘Culture of Sound’ nightclub, after local authorities imposed restrictions on public gatherings as a measure to prevent the spread of coronavirus disease (Covid-19), in Kharkiv, Ukraine. — Reuters

People speak inside an apartment while watching the stream of an online party organised by the ‘Culture of Sound’ nightclub, after local authorities imposed restrictions on public gatherings as a measure to prevent the spread of coronavirus disease (Covid-19), in Kharkiv, Ukraine. — Reuters

Ukrainian DJ Olga Udovenko plays music during an online broadcast in the empty ‘Culture of Sound’ nightclub, after local authorities imposed restrictions on public gatherings as a measure to prevent the spread of coronavirus disease (Covid-19), in Kharkiv, Ukraine. — Reuters

Ukrainian DJ Olga Udovenko plays music during an online broadcast in the empty ‘Culture of Sound’ nightclub, after local authorities imposed restrictions on public gatherings as a measure to prevent the spread of coronavirus disease (Covid-19), in Kharkiv, Ukraine. — Reuters