Facebook and the researchers leading the project say they have overcome privacy concerns by aggregating the data several times over and funneling it through academics. The researchers share broad findings with state and local health departments, which do not receive any raw data. — Reuters

The Covid-19 Mobility Data Network, a group of 40 health researchers from universities including Harvard, Princeton and Johns Hopkins, said that since mid-March its members have been sharing insights gleaned from the social media giant's data with California, Massachusetts and New York City.

Using mobile location data in the coronavirus fight comes amid intense scrutiny of the privacy practices of tech companies, which collect detailed information about people's interests on apps and websites, often to target ads.

Facebook and the researchers leading the project say they have overcome those concerns by aggregating the data several times over and funneling it through academics. The researchers share broad findings with state and local health departments, which do not receive any raw data.

Facebook confirmed it was sharing the data as part of its nearly year-old Disease Prevention Maps programme, which has also aided efforts to increase vaccination rates in Malawi and track cholera outbreaks in Mozambique.

The Mobility Data Network has become one of the first initiatives to harness mobile data for the US response to the coronavirus pandemic, an approach deployed early in places like China, South Korea and much of Europe but scarcely used so far in the United States.

With the virus already spread widely throughout the country, the research focuses on the success of measures designed to get people to stay home, as almost 40 US states have ordered. 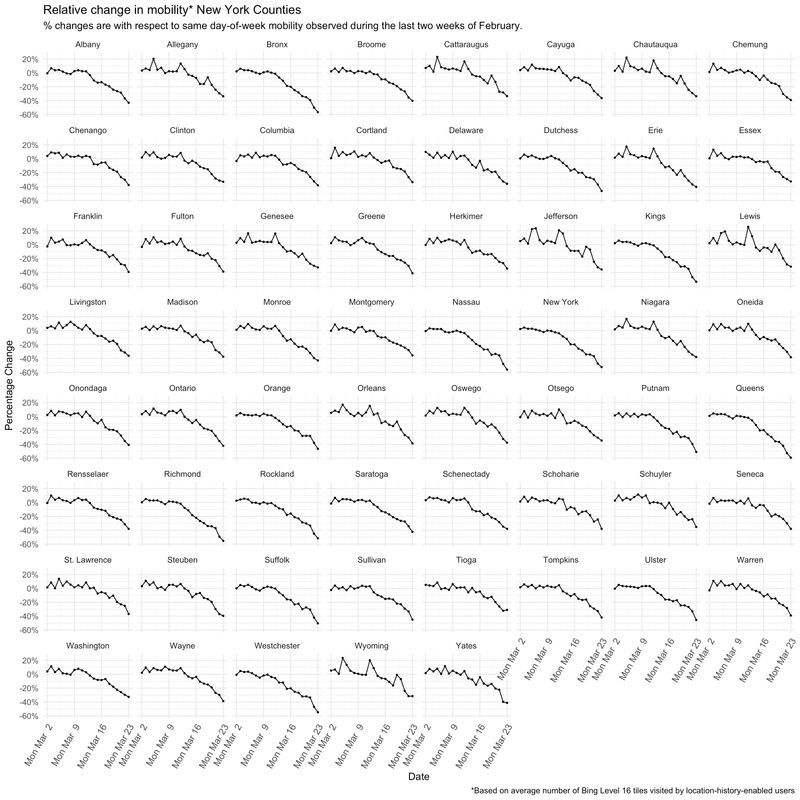 Using the data, which is stripped of identifying information, researchers provide insights like the average distance of trips users have taken in a city and the proportion of residents in each county that have stayed within their 600 square meter home “tiles”.

In New York, for example, researchers found mobility dropped significantly on the weekends but crept back up on weekdays, when many people — particularly those living in low-income neighbourhoods — are still required to work.

The data can also show “if at first people stop moving but then begin to travel further once fatigue sets in”, said Caroline Buckee, an epidemiologist at Harvard's School of Public Health who is among those leading the network.

Measuring changes in mobility and correlating them with later hospitalisations can also eventually help determine how to roll back social distancing orders, said Buckee, who previously studied the spread of malaria and dengue using mobile data.

About half of the apps on Alphabet Inc's Google's Play Store and a quarter on Apple Inc's App Store use at least one service capable of grabbing location data, according to industry research firm Appfigures.

Smaller location tracking services including Cuebiq and Camber Systems are queued up to provide inputs to the research network, too.

Others in talks to receive location analyses include Maryland, Washington and the District of Columbia, along with Los Angeles, San Jose, Santa Clara and Kansas City.

Kansas City confirmed that it was considering taking part in the project, while the other government agencies did not respond to requests for comment.

Facebook is in touch with the White House and Centers for Disease Control and Prevention, a spokeswoman said, but added that no analyses have been delivered to any US federal entities so far.

The companies did not respond to requests for comment.

Although other countries have successfully used location data to warn contacts of those with infections, neither officials nor researchers in the United States have asked for such personal information, said Mendelsohn.

"Contact tracing is something that we were beyond weeks ago," said Mendelsohn. "They need something that shows how we are doing vis-a-vis social distancing, which statistically models what we are about to be in for, so as to predict patient load." — Reuters