Overwatch 2 is expected to launch for PC and console. — AFP Relaxnews

Though its existence and form were leaked in the lead up to Blizzcon, an official announcement brought better insight to console and computer game Overwatch 2 and its overlap with 2016 predecessor Overwatch.

The sequel brings a new range of co-op missions, with skill unlocks as characters are levelled up through repeated play, and the implication that those characters' stories might be more fully explored – though Overwatch 2 remains primarily an action game.

Keeping the franchise player base together is the promise that the new maps, versus modes, and characters of Overwatch 2 are also being brought into Overwatch, and that the two games' players will meet in versus multiplayer.

Those that migrate to the sequel bring their digital accomplishments and items with them, when Overwatch 2 finally launches; Blizzard staff declined to reveal a release date, with development still in full swing.

The next big entry to a foundational combat role-playing game franchise appears deeper in terms of customisation and wider in terms of environmental landscapes, where previous games tended to drill down into increasingly hellish dungeons.

How much of that is a response to the successes of Path Of Exile and Divinity: Original Sin 2 is up for speculation; what is clear is that players will be able to pick between a magic-wielding sorceress, a barbarian warrior with a powerful front kick, and a dwarven druid fighter that can shapeshift into a grizzly bear as their avatar in a battle against grim, medieval fantasy evils.

It's also always online, a requirement this time presented for multiplayer reasons rather than as a function of an in-game marketplace or a copy protection measure.

Again, as with Overwatch 2, there's no date announced just yet, neither for mobile spin-off Diablo Immortal.

At last, a major Blizzcon 2019 announcement that does have a release date: the Shadowlands expansion for subscription MMO World Of Warcraft, in which players are sent into the afterlife, will arrive in 2020.

As well as a new reason to defeat the forces of darkness and their commanding Lich King, players will be making an allegiance with an afterlife faction of their choosing and, away from the spread of new raids, missions, and dungeons, taking on the Tower of the Damned, which will be different every time. 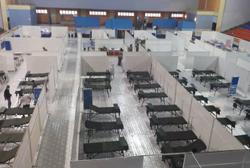