TURNING THE TIDE: The new Galaxy S6 on display in a Samsung store in Sydney. Samsung said it expected its new flagship smartphone to shatter sales records and pull the company out of a recent profit slump that saw it lose ground to arch-rival Apple and cheaper Chinese makers.

SEOUL: Samsung rolled out its new smartphone in South Korea and 20 other countries on April 10 in a bid to restore its role as market leader.

The Galaxy S6 and its curved-edge variant, the Galaxy S6 Edge, went on sale in South Korea, home of the electronic giant, as well as Europe, the United States and markets in the Asia-Pacific such as Australia, Singapore and India.

Samsung, labouring under the burden of successive quarters of plunging profits and booming sales of arch-rival Apple’s iPhone 6, is hoping that new phone will reverse the company’s fortunes.

First unveiled in March, the two new phones have received rave reviews and fuelled Samsung’s hopes of a market comeback after the Galaxy S5 failed to make a significant impact.

Joo Seung-Bin was one of the first in line to buy an S6 in Seoul on Friday morning.

“It’s not cheap, but then I’m not one of those people who upgrades their phone every year. There’s been a lot of buzz about this model, so I thought I’d check it out,” Joo said.

Both models are powered by Google’s Android operating platform and, in a break from their-plastic-backed predecessors, feature metal and glass bodies.

Reviews have been overwhelmingly positive with Yahoo! Tech labelling the models the “new Android smartphone kings” and the Wall Street Journal calling them “the most beautiful phones Samsung has ever made.”

“Given the response from the market and clients... we expect the S6 to set a sales record for all Galaxy models,” Lee Sang-Chul, the vice head of Samsung’s mobile unit, told reporters on April 9.

Samsung rarely discloses handset sales figures but the Galaxy S4, released in 2013, is known to have set the firm’s sales record of 70 million units globally. 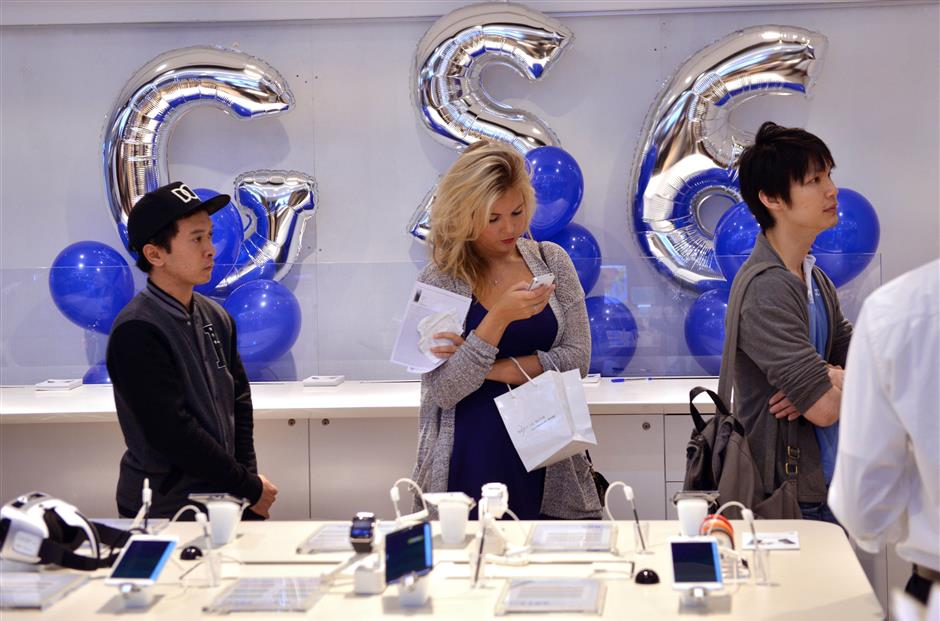 HIGHLY ANTICIPATED: Customers queueing in a Samsung store for the new Samsung Galaxy S6 and S6 Edge in Sydney. – AFP

“I just really like the gadgets,” said Judy Ryan as she waited to complete the purchase of her white Galaxy S6.

“It’s very pretty. It’s fun. I needed a new phone anyway so I thought I may as well get a new one.”

Samsung suffered a dramatic slide in profits last year, hit by slowing demand in an increasingly saturated and competitive smartphone market that it had largely dominated since 2011.

The company struggled to fend off a double challenge from Apple in the high-end market and rising Chinese firms such as Lenovo and Xiaomi in the fast-growing mid and low-end markets.

But signs that Samsung was beginning to turn things around were confirmed on April 8 when it released a better-than-expected profit estimate for the first quarter.