DEEPER DIVISIONS: Apple Pay was meant to propel the emerging mobile payments sector to newer heights but has instead inadvertently spotlighted the entrenched differences of opinion between retailers and the banking and payments industry.

WASHINGTON: Apple Pay, meant to inject momentum into a fragmented market for the emerging mobile payments sector, has instead highlighted the squabbles between retailers and the banking and payments industry.

Since Apple Pay made its debut Oct 20 for US customers with the iPhone 6, several major retailers have said they would not use it.

That includes number one retail group Wal-Mart and the large pharmacy-retail group CVS, which has disabled payment terminals that could accept Apple Pay.

"You're never going to come up with anything as smooth (and) as easy as Apple Pay. But if you can't use it, you're going to use something else," said Avivah Litan, an analyst at Gartner who follows mobile payments.

Litan said a few retailers, such as McDonald's and Disney, like the system because it speeds transactions and "every fraction of a second goes to the bottom line."

But she noted that for most retailers, credit card fees simply are too high.

Apple Pay has aligned itself with major banks and payment processors Visa and MasterCard, which take a cut of every transaction, typically 2% to 3%.

Retailers, which often operate on razor-thin profit margins, would like to cut or eliminate those fees, and Apple Pay does nothing to change that system.

"Most of the merchants have been hungry for competition," Litan said.

Gartner projects mobile payments will hit US$721bil (RM2.38tril) around the world by 2017. But some estimates have been lowered recently amid squabbles over the type of technology used and payment structure.

Apple uses a "near field communication" or NFC chip, similar to that used by Google Wallet and Softcard, which has been slow to gain traction.

Although Apple has signed on most major US banks, Visa and MasterCard, and retailers like Macy's and Staples, many others are balking.

A coalition of merchants led by Wal-Mart, Target and Sears called MCX is promoting its own system called CurrentC, using a different technology, and importantly, allowing retailers to bypass credit cards and use direct bank debits with lower transaction costs.

Nitesh Patel, analyst with Strategy Analytics, said retailers are not necessarily targeting Apple but want "to avoid what they believe are excessive swipe fees and the cost of upgrading hardware and software to accept contactless payments."

But he added that if Apple Pay catches on, the retailers will be forced to go along. 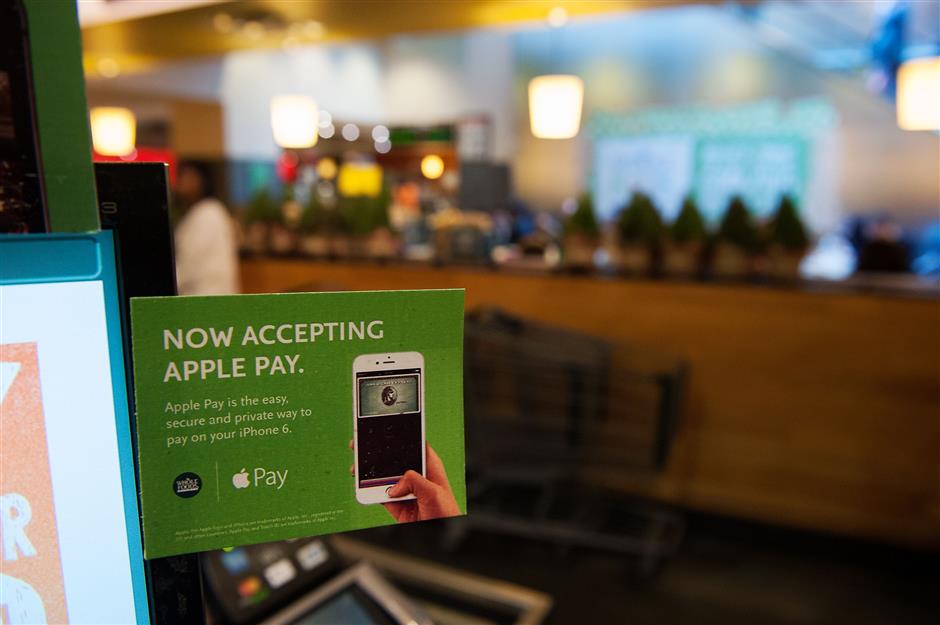 PEOPLE POWER: If Apple Pay catches on, retailers will have to fall in line. — AFP

Patel said, however, that if the retailer sector does not unify around the contactless system used by Apple Pay, users may revert to their old habits, "since they will need to carry their payment cards and wallet with them anyway."

"This is a challenge that all proponents of contactless payments, Google Wallet, Softcard and Apple Pay face together," Patel told AFP.

The merchant system got a black eye when it revealed a data breach exposing customer emails, even though the app itself was not affected.

"Apple Pay is highly secure, and the data privacy will mean that merchants are less likely to be hacked since they won't have card payment data that hackers are interested in," she said.

"Apple Pay is also very fast and consumers seem to like it as well."

"They want that data," O'Donnell said. "That's why the grocery stores give you the loyalty cards."

O'Donnell said Apple has created excitement about mobile payments but has failed to bridge the differences among the market players.

"It gives momentum to the sector but it remains fragmented," he said.

"Apple Pay provides an example of the promise and the challenges of mobile payments in a very clear way."

Litan said meanwhile that the squabbles could intensify. And she noted that retailers which are disabling the ability to use contactless NFC technology could also be blocking rival systems.

The merchant-sponsored system uses a more cumbersome technology that requires customers to scan a QR (quick response) code and display that. But by bypassing the credit card system, it can reduce costs for merchants, who may pass on these savings to customers.

"The merchant systems are never going to be as convenient as Apple's," Litan said.

"They can't compete with Apple on convenience but they can on price. It's going to boil down to price versus convenience, and price usually wins." — AFP