Samsung Electronics has announced the Galaxy NX, the world’s first 3G/4G LTE interchangeable lens camera running on Android, taking the company’s foray into the camera market to the next level.

Another selling point of the NX is that it is also fully compatible with the entire range of Samsung lenses, so if you had already invested in the company’s camera ecosystem, you’re covered.

As for the Android 4.2 Jelly Bean OS, Samsung aims to utilise the functionality of a smartphone to improve the photographic experience.

One obvious example is allowing users to choose from an entire universe of Android apps to help personalise their Galaxy NX and do more than just shoot photographs and video.

The camera is also packed with more than 30 smart modes to help users take exceptional shots: Multi Exposure merges two different shots together to produce one distinctive image; Animated Photo connects continuous shots of up to five seconds, creating a moving GIF file; Sound & Shot stores sound and voice together as the picture is taken; and Camera Studio allows users to easily customise settings with their most frequently used applications or camera modes.

But it’s not all just work and no play. Fun functions like Photo Suggest provides location based recommendations based on your GPS location and displays pictures taken by others at the same spot, while Story Album allows you to compile pictures in one timeline.

However as there were limited units of the NX available for hands-on testing at the launch (plus there’s only so much you can do with the device when it’s locked to the table) we can’t really vouch for the true picture quality of the device until we get our mitts on it for a proper review.

The built in 3G/4G LTE technology means photographers will be able to stay connected. 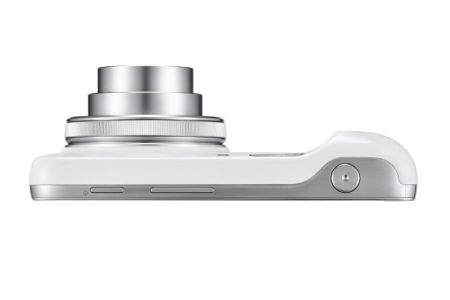 Samsung has expanded its Galaxy S4 family with the introduction of the S4 Zoom, Active and Mini.

Billed as the only smartphone with a 10x optical zoom, the Galaxy S4 Zoom combines some serious hardware — 16-megapixel BSI CMOS sensor and Xenon Flash — with some fun features like Smart Mode Suggest, which can assess the scene for you and provide a short list of the best options for your consideration based on surrounding factors such as light levels, focal length, or face detection.

We had a chance to fiddle with it more and tried the Zoom Ring, which instantly launches the camera and gives instant access to multiple camera modes including Auto, Gallery and Smart Mode.

You can also perform some basic image manipulation with in-camera settings, such as enlarging the eyes, slimming the neck and cheeks and so on under the Beauty mode (although we won’t be able to say for sure if the effects look natural or cartoonish until we get our hands on an actual review unit).

As the name suggests, if you’re in the middle of a phone call and you’re suddenly seized with the desire to share something you saw, a quick twist of the Zoom Ring brings up the camera mode so you can snap a pic and instantly send it to whoever you’re talking to, all while the call is still in progress.

As with the Galaxy NX, there is also a Photo Suggest and Story Album feature.

The S4’s DNA is apparent in the S4 Zoom, especially in its shared Touchwiz interface running on Android Jelly Bean 4.2.

The Zoom boasts the new Samsung Hub, a one-stop destination for all the latest entertainment, and Group Play to let you share all of it instantly with your friends’ Samsung devices, without the need for a WiFi network or cellular signal. 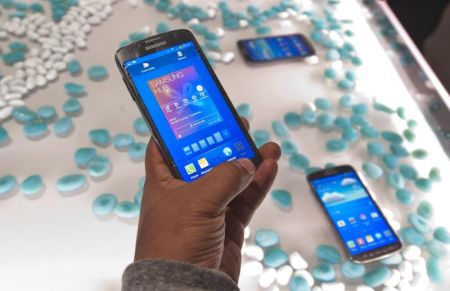 Water torture: S4 Active being submerged in liquid. The phone is dust and water resistant.

Although Samsung had earlier confirmed the existence of the S4 Active earlier this month in the lead up to launch event in London, the company did, however, still have some exciting new info to divulge.

Chief of which is that the S4 Active complies to the IP67 standard for protection from dust and water, so that you can take it snorkelling or hiking without fear.

(IP stands for International Protection against ingress of solid foreign objects and harmful ingress of water, with the highest level being IP68),

You can even take brilliant underwater pictures with the 8-megapixel rear camera and Aqua Mode feature, which can be used to enhance underwater shots and videos, all made possible by the phone’s fully sealed design that keeps dust particles out and protects against water damage.

Even the earphone jack is water resistant — but only for up to half an hour and submerged in a depth of up to one metre.

So pools and beaches, yes, but definitely no scuba diving with the Active!

The S4 Active boasts a 1.9 GHz quad-core processor, 2,600mAh battery, 5in full HD screen and Glove Touch — cold weather will no longer be a deterrent to keeping you connected, as the touchscreen can be fully operated while wearing gloves.

As with the Galaxy NX and S4 Zoom, the phone’s camera interface includes Sound & Shot, Drama Shot which allows users to see all the action in one continuous time lapse, Story Album and Group Play.

It also shares the same features as the S4 such as Air View, Smart Pause, Air Gesture, S Health, S Translator, and S Travel, to name but a few.