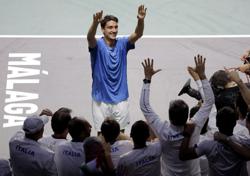 MALAGA: Felix Auger-Aliassime pulled double duty to lead Canada into the Davis Cup final against Australia after orchestrating a 2-1 comeback win over Italy.

The 22-year-old Canadian then replaced the out-of-form Shapovalov to partner Vasek Pospisil in the decisive doubles and the gamble paid off in a 7-6 (7-2), 7-5 win over Matteo Berrettini and Fabio Fognini.

Berrettini, ranked 16 in singles but only 827 in doubles, replaced Simone Bolelli but the late switch by skipper Filippo Volandri backfired.

Canada, runners-up to Spain in 2019, will attempt to win the Davis Cup for the first time. Australia haven’t played in the final since 2003 when they claimed a 28th title.

In a doubles clash which lasted two hours, the Italians were made to regret surrendering early breaks in both sets.

The Canadian duo broke decisively for 6-5 in the second set before sealing their spot in the championship match leaving Italy still stuck on one Davis Cup title won back in 1976.

“We knew we could make changes if we needed to,” said Auger-Aliassime.

“The whole team have connected around this idea – the main goal of lifting the cup. There are no egos and it’s a great feeling.”

Canada captain Frank Dancevic said he opted for Auger-Aliassime in the doubles as he was the fresher player.

“Vasek, he plays amazing with both Denis and Felix,” he said.

“Felix was more fresh. He was feeling great on court. He was fresh going into the match. That was sort of the thought behind the decision.

“Denis really left his heart out today. Played a 3 hour, 15 minute match. It was tough coming back to play doubles today when we had Felix who was fresh.”

Italy skipper Filippo Volandri revealed that the late inclusion of Berrettini was sparked by injury to the veteran Bolelli.

“Yesterday I asked Matteo to try to be ready for today in case we had to play the doubles. He decide to try to be there, and he practised twice yesterday. He practised alone this morning and he was ready,” said Volandri.

Australia reached the final on Friday with a 2-1 win over last year’s runners-up Croatia. — AFP 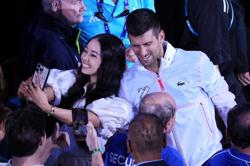