(Reuters) - The International Tennis Federation (ITF) will work with the women's body (WTA) to ensure players can play in WTA and ITF tournaments after Iga Swiatek opted to skip the Billie Jean King Cup, the world tennis governing body said on Tuesday.

World number one Swiatek said she had no choice but to pull out of the Nov. 8-13 Billie Jean King Cup finals citing potential travel fatigue as the tournament in Glasgow begins a day after the WTA Finals wraps up in Fort Worth, Texas.

"The ITF is sorry that Iga Swiatek is unable to take part... and recognises that the schedule for the two major year-end events presents a challenge for players competing in both events," ITF president David Haggerty said.

"We have been working with the WTA to try to coordinate suitable dates.

"While we were able to confirm the Billie Jean King Cup Finals in Glasgow back in June, the WTA Finals venue in Fort Worth, Texas was confirmed during the U.S. Open and restricted in terms of available dates."

Poland are in Group D with the Czech Republic and the United States in the 12-team tournament.

Haggerty said the ITF had revised the schedule to ensure Poland and the United States start their campaign as late as possible.

"We are committed to working with the WTA on the 2023 schedule so that we have a better transition between the two competitions," Haggerty added. 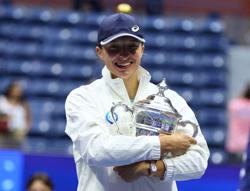