(Reuters) -Hubert Hurkacz battled back from a set and a break down to beat Casper Ruud 5-7 6-3 6-2 on Saturday and reach the Canadian Masters final.

He will meet Pablo Carreno Busta in Sunday's title clash after the Spaniard battled nearly three hours to eke out a 7-5 6-7(7) 6-2 victory against Briton Dan Evans in the second semi-final.

Hurkacz raced out to a 3-0 lead in the first set before Ruud regrouped, delivering a spinning, 97 mile per hour forehand winner to secure the break and a 6-5 lead.

An unreturnable serve in the next game secured the set for the Norwegian, who threatened to run away with the match when he broke the Pole to open the second set.

But Hurkacz responded with a break of his own and an emphatic overhead winner to take a 4-2 advantage and he levelled the contest at a set apiece with an exquisite drop shot.

In the first game of the decider, Ruud squandered a 40-0 lead and was ultimately broken, which shifted momentum firmly in Hurkacz's favour.

The match felt all but over when Hurkacz smashed a backhand crosscourt winner to go up a double break, pumping his fist in celebration.

"Casper was playing really well. He was the better player for the first half of the match," Hurkacz told reporters.

"I was just searching for opportunities, just trying to take every single opportunity to get ahead in the rally and make him uncomfortable. Obviously serve helped at the end."

Hurkacz has come out on the winning side in five of his six career finals appearances.

Carreno Busta also had to work hard to secure his passage to the final.

The Spaniard won significant first serve points to claim the first set but Evans forced the decider with his sublime net play in the second.

Having squandered a match point in the second-set tie-break, Carreno Busta dominated the third set winning the final 12 points, including eight on return, to stay on course to be the tournament's first unseeded champion since Argentina's Guillermo Canas in 2002.

(Reporting by Rory Carroll in San Francisco and Amlan Chakraborty in New Delhi, Editing by Ed Osmond and Jacqueline Wong) 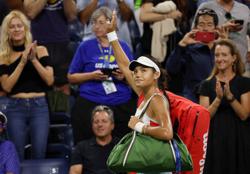