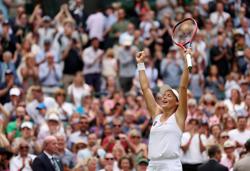 LONDON (Reuters) - German Tatjana Maria said it was crazy to be in her first Grand Slam semi-final at the 47th attempt but that being a mum was still her proudest achievement.

Maria, 34, came from a set down to edge her young compatriot Jule Niemeier, 22, in Tuesday's quarter-final at Wimbledon. Before this tournament, Maria had only once gone beyond the second round of a major in her 15-year career.

She missed three Grand Slams last year due to the birth of her second daughter Cecilia and was ranked outside the top 250 as recently as March.

But on Tuesday, watched by her first daughter Charlotte, Maria became the sixth woman in the Open era to reach the Wimbledon semis after her 34th birthday.

"I think for me that's the most important in my life, to be a mum of my two kids. Nothing will change this," she told a news conference, still with the smile on her face from when she left Court One.

"I'm here, yeah, I'm in the semi-final of Wimbledon, it's crazy, but I'm still a mum. After this I will go out over there and I will see my kids and I will do the same thing that I do every single day.

"I will change her Pampers, I mean, everything normal. I try to keep normal as much as possible, because what makes me the proudest is to be a mum."

Maria has a knack for confounding expectations, having first broken into the top 50 in the world rankings following the birth of her first daughter.

"I reached the top 50 with Charlotte, and now I'm back with my second child. Still everybody was doubting," she said.

"It's a little bit of my life to show everybody that I'm still here and I'm a fighter, and I keep going and I keep dreaming. That's what I want to show my kids."

She will play either her friend Ons Jabeur, the third-seeded Tunisian, or 66th-ranked Czech Marie Bouzkova in the last four.

Although Niemeier's impressive run came to an end, she will not forget her debut in the main draw at Wimbledon in a hurry having seen off players like Anett Kontaveit, Lesia Tsurenko and Heather Watson on her march to the last eight.

It shows German tennis is in a strong place with the youngster breaking into the top 100 this year.

"I think it was a great match from both of us. (It was a) tough one today, but Tatjana just played really good in the right moments," Niemeier said. 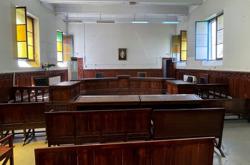 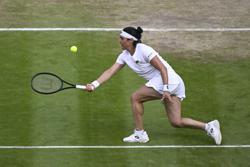