LONDON (Reuters) -British ninth-seed Cameron Norrie reached his first Grand Slam semi-final when he twice came from behind to beat unseeded Belgian David Goffin in five sets on Tuesday to set up a dream Wimbledon meeting with Novak Djokovic.

Norrie looked out of sorts for much of the match but, lifted by the fans who threw their support behind their adopted South Africa-born home hope, found an extra gear in a tense fifth set to secure the biggest win of his career by 3-6 7-5 2-6 6-3 7-5.

"I can't even talk, I'm so happy to get through with such a great team, such a great family and friends here," said the 26-year-old who was ranked 50th a little over a year ago.

"It wasn't going my way from the beginning. All credit to David, he was moving me and playing really good, but thanks to you guys (the crowd) I managed to stay as patient as I could.

"It was all just adrenaline, using my legs and trying to put the ball in the court, and it's great to get over the line."

Norrie came into his first Grand Slam quarter-final brimming with confidence after successive straight-sets wins but looked a shadow of the player who moved into the world’s top 10 in April as his returns and ground strokes lacked penetration or pace in a limp first-set display.

He trailed in the second but levelled at 4-4 after converting his first break point of the match and finally got the crowd roaring when he broke again to take it 7-5.

Almost immediately, however, near silence descended as he seemed to lose all his energy, being broken to 15 and then love to trail 4-0 and effectively blow the set in a matter of minutes.

The 31-year-old Goffin was on court for four and a half hours in getting past Frances Tiafoe on Sunday and began to look a little tired in the fourth as Norrie upped his own intensity and broke for 5-3 before serving it out.

With the evening crowd sensing something special, the New Zealand-raised, American-educated Norrie surfed the emotional wave, upping the pace and accuracy of his first serves and looking very much the player in the ascendancy.

However, the experienced Goffin, also seeking his first Grand Slam semi at the 38th attempt, held on to reach 5-5.

But with a decisive tiebreak looming, Norrie somehow found an extra gear to blast through a service break to love with probably his best tennis of the match.

He duly served out to secure his opportunity to take on Serbian top seed Djokovic, who has won the last three Wimbledon titles, on Centre Court on Friday.

"It's great to get this, but it only gets tougher," said Norrie. "I'm going take it to him and hopefully you guys can get behind me and I'm sure you will." 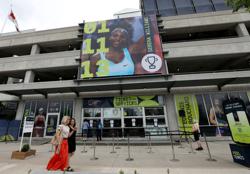