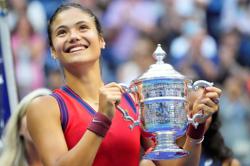 LONDON (Reuters) - Britain's golden girl Emma Raducanu gave short shrift to any suggestion the weight of expectation on her young shoulders was a factor in her second-round loss to France's Caroline Garcia at Wimbledon on Wednesday.

The 19-year-old U.S. Open champion was handed the Centre Court stage for the second time in three days but was overpowered by the experienced Garcia, going down 6-3 6-3.

"Yes, I have had attention. But I'm a Slam champion, so no one's going to take that away from me. Yeah, if anything the pressure is on those who haven't done that," she told reporters.

Raducanu, the 10th seed, was not at her best although former top-10 player Garcia was inspired throughout the contest and allowed her few opportunities on a blustery day.

In the end, Raducanu's lack of preparation for the tournament, a consequence of a side injury that prevented her completing a match in the grasscourt swing, was exposed.

"I didn't feel anything out there. I declared myself fully fit when I walked out onto the court on the first day. But I've played seven hours of tennis in a month," she said.

"To even compete with these girls at this level and win a round I think is a pretty good achievement."

Against Garcia she looked very much the inexperienced youngster with much to learn, despite the fact she is already a Grand slam champion after her fairytale in New York last year when she came through qualifying and then took the title without even dropping a set.

Raducanu said defeats like the one she suffered on Wednesday were just part of the learning process.

"Of course it will make me a better player because they're just highlighting all my weaknesses," she said.

"Then when you do it on a big court like that, it's definitely magnified. It's just great for me to get all these lessons at such a young age so that when I'm in my mid 20s, I'll have those issues or little glitches in my game sorted.

"I'll just get better. I'll just look at what's not working, what my weaknesses are, improve them. It's good for me." 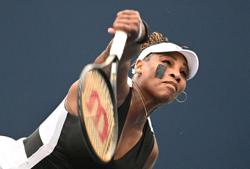 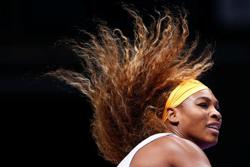 Tennis-Thinking too much about 24th Slam didn't help, says Serena
What's next for Serena Williams?
Tennis-Serena Williams' journey to the top of the women's game
Serena Williams to retire from tennis after U.S. Open
Tennis-Fernandez delights home crowd with winning return from injury in Toronto
Tennis-Wawrinka and plenty of rain fall at Canadian Open
Tennis-Russia's Medvedev looks on the bright side of Wimbledon ban
Tennis-Serena advances in Toronto, joins Rybakina and Halep in second round
Tennis-Serena 'can't wait' to reach light at end of tennis tunnel
Tennis-No pressure says Raducanu as U.S. Open title defence looms