Tennis-Medvedev pushing for return to top of world rankings (Reuters) - Daniil Medvedev, determined not to be remembered for his short-lived stay at world number one, said that he is targeting a return to the top with a stellar showing at the French Open.

Medvedev, ranked second, claimed top spot in late February but was overtaken by Novak Djokovic just two weeks later. The Russian can ascend the summit once again if he reaches the final at Roland Garros. 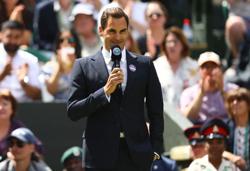