Spain's Carlos Alcaraz notched 24 winners and outlasted third-seeded Matteo Berrettini of Italy 6-1, 6-7 (2), 7-6 (5) on Friday to reach the semifinals of the Erste Bank Open at Vienna, Austria.

The 18-year-old Alcaraz notched his second biggest career win by beating world No. 7 Berrettini, who had 12 aces. Alcaraz recorded a stunning victory over No. 3 Stefanos Tsitsipas in the third round of the recent U.S. Open.

Botic Van de Zandschulp won 72.2 percent of his first-serve points en route to a stunning 6-3, 6-4 victory over top-seeded Russian Andrey Rublev to earn a spot in the semifinals at St. Petersburg, Russia.

The Dutch qualifier had five aces and saved five of six break points while knocking off Rublev. He will next face Croatia's Marin Cilic, who registered a 6-4, 3-6, 6-3 victory over third-seeded Roberto Bautista Agut of Spain. 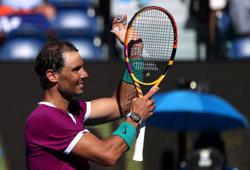